An army-intelligence-trained, Arabic-speaking, travel-loving 3L, Phil Aubart brings a genuine passion for even-keeled discussion to his leadership of the Federalist Society at Duke Law.

Now in his second year as chapter president, a post he currently shares with Jonny Havens ’13, Aubart has aimed to open the group, known nationally for its conservative/libertarian viewpoint, to all Duke Law students, regardless of political leanings.  “I don’t want one of our guest speakers to be up there pontificating on conservative topics,” Aubart says. While he chooses speakers from the national organization’s approved list, he routinely presents alternate, opposing views alongside to encourage conversation and debate. This broadminded approach has made Federalist Society events some of the best attended at the Law School.

A Minneapolis native whose diplomatic instincts first helped him navigate a “tough” transition from being homeschooled to becoming captain of his private high school’s football team, Aubart credits participation on the school’s “discussion” team with honing his interest in hearing all sides of an issue.

“In debate, the goal is to argue one’s opponent into the ground,” he explains. “In discussion you have to get into a harmonious conversation with your competitors and come up with a solution to the given topic. You don’t want to dominate the conversation or interrupt anybody ─ to win you’ve got to subtly lead the group towards a good conclusion.” Aubart eventually became Minnesota’s statewide discussion champion.

Inspired by that success and by a summer job with a public interest attorney, Aubart decided he would be a lawyer ─ eventually.  He joined the Army in 2004, directly out of high school, having been called to serve following the 9/11 attacks and the invasion of Iraq, and following a family tradition of military service.

“When the recruiters called, I was interested enough in what they had to say to take the Army entrance exam,” he recalls.  The recruiters were pleased with his score and told him he could train as an interrogator. Again, Aubart was “interested enough” to take the next exam required, which involved learning rules for a fictitious language and then trying to read and apply the language. “That was the most fun I’ve ever had taking an exam,” Aubart says, laughing.

If the test was fun, basic training with its harsh, seemingly round-the-clock drills, was not.  Afterwards, learning Arabic seemed easy, Aubart says. Once he was proficient in the language, he began interrogation technique training. “I loved it,” he says, explaining that the training reminded him of his high school involvement in discussion. The technique involved convincing a prisoner through conversation to reveal what they knew; there was no physical contact allowed.

Training over, and still keen on becoming a lawyer, Aubart set out for Dartmouth where he joined the Reserve Officer Training Corps to pay for college. He majored in Arabic language and history at Dartmouth and worked for a quarter in Cairo. Upon graduation, he was commissioned as a 2nd lieutenant and deferred his four years of required military service to attend law school, with the intention of performing his service as a member of the JAG Corps. There was one catch: the JAG Corps ─ with its 10 percent acceptance rate ─ would not guarantee him a spot after graduation, and if he didn’t earn one, he would be drafted right into the Army.  He decided to chance it, and came to Duke Law.

Aubart has taken on law school with the same kind of energy and excitement for challenges that propelled him into the military. He is on the Moot Court Board ─ he was a finalist in the 2012 Dean’s Cup Competition ─ serves as the Public Interest Law Foundation's auction manager and co-chair, and plays on the intramural softball and flag football teams.  A lead editor for the Alaska Law Review, he clerked for the Army JAG Corps in Alaska last summer and fit in a cross-country drive along the way; he is proud of having visited 48 states to date and fully intends to visit the last two, Hawaii and Rhode Island.  But Aubart’s involvement with the Federalist Society is closest to his heart.

“It was John Radsan’s visit that did it for me.” Aubart says. Radsan, a former deputy general counsel of the CIA and professor of law at William Mitchell College of Law in St. Paul, was a Federalist Society guest in 2010, and Aubart enjoyed meeting him over dinner.  “His speech was engaging,” says Aubart, “and the discussion over dinner was great. I knew that night I wanted to be involved in bringing more guests like him to Duke.”

Aubart’s success with the Federalist Society is striking. Last year he organized 28 events, several of which drew more than 100 students.  In addition to visitors such as Baylor University President Ken Starr ’73, many featured members of the Duke Law faculty engaging with guests on topics ranging from health care reform to government regulation of internet speech.

The Duke Bar Association honored Aubart with its 2012 award for “Outstanding Student Contribution to the Duke Law Community,” and the Federalist Society with its award for “Greatest Contribution to Civic Discourse.”  But to Aubart, the most significant achievement has been the broadening of student interest in the group. He estimates that there are about 230 members of the group, many of whom do not have a conservative political bent. “I’ve worked hard at making everyone feel welcome,” says Aubart. “We do not want to appear as some weird right-wing cabal. We want interesting topics and interesting speakers interacting with Duke Law’s own very interesting speakers.”

His plans call for two events per week in the current academic year ─ and then a career in the Army JAG Corps with side trips, of course, to Hawaii and Rhode Island. 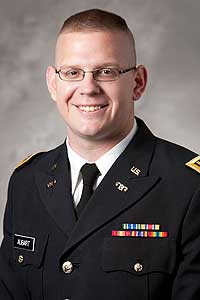