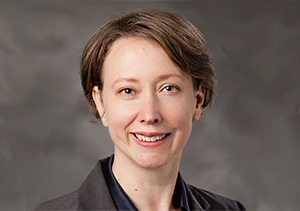 Amy Pickle, director of the State Policy Program at Duke University’s Nicholas Institute for Environmental Policy Solutions, brings a unique breadth of experience to her fall-semester Energy Law course, having worked in state government, as an environmental litigator and lobbyist, and as a member of environmental and energy regulatory commissions.

At the Nicholas Institute, Pickle focuses on the interplay between federal and state policy on a variety of environmental issues, including energy, water, climate adaptation, and environmental justice. She joined the institute in 2008, after five years as a senior attorney at the Southern Environmental Law Center (SELC), where her litigation and lobbying practice focused on water and coastal issues. She earlier worked on environmental issues as assistant attorney general in the North Carolina Department of Justice. Pickle also has served on both the N.C. Environmental Management Commission, which oversees and adopts rules for several divisions of the Department of Environment and Natural Resources, including those pertaining to air, water, and land resources, and the N.C. Mining and Energy Commission, which develops regulations for oil and gas exploration and development in the state.

A core goal of her class, Pickle says, is to give students “as full a picture as possible” of the way law and policy intersect in the regulation of a public good. “In law practice, you are presented with conflicts and with companies and people who are wrestling with problems they can’t answer by simply going to a statute or a rule.”

Practically, that means exploring why regulated monopolies have long been used to provide public goods, beginning with railroads and now with utilities such as electricity, she says.

“Understanding why electricity generation evolved the way it did gives us an understanding both about how we can create public value and minimize environmental and public health problems,” she says, noting that electricity is generally viewed as critical for alleviating poverty domestically and globally. The class will examine how it is regulated (and, in some states, recently deregulated in large measure), and how energy regulatory and delivery systems are adapting to recent market, environmental, land-use, and public health pressures.

“With energy, you have, in some ways, a conflict between public goods,” she says. “You have this public good of electricity that you want delivered, but you also have [demand for] such public goods as clean air and clean water and low electricity rates in order to alleviate poverty. This conflict offers an interesting case study as to how we work as a society — how we wrestle with environmental and poverty and public health impacts around something that is also essential.”

Her diverse professional background is central to her current task, at the Nicholas Institute, of helping public and private decision makers craft sound, scientifically based policy strategies, as well as to her teaching, Pickle says. Litigating, in particular, “made me a better attorney and a better reader of the law,” she says. “It was critical for understanding not just how I might read laws, rules, and case law, but how courts might read them, and how someone on the other side will read the same thing and come to a different conclusion.”

Working as a lobbyist at the SELC helped her understand how to “move” a policy issue in a window of time when the legislature is active and interested in the matter, she says. “The legislature can undo litigation victories with the stroke of a pen, so it’s helpful to understand how and why a body makes decisions and how to create a legislative champion — how to frame an issue so it gets the legislature’s attention.”

As a member of state regulatory commissions, Pickle became a decision-maker. “There’s no substitute for sitting on a citizen commission with a number of other experts with different views and experiences and working through a public process to write rules,” she says. “You come to understand exactly how far a body with statutory authority and limitations can go. I also learned how decision-makers use science, how they use information that comes from citizens, how people can readily plug into an issue that might have been debated by a body for years before the public gets involved, and how legal advocates can access that process.”

“Amy brings a thorough and thoughtful approach to a dynamic area of law, one that is rapidly changing as we come to terms with the array of effects energy production has on our natural resources and quality of life,” says Clinical Professor Michelle Nowlin JD/MA ’92, who worked with Pickle at the SELC. “Amy’s skill set and genuine commitment to students will be an asset to the law school as we continue to build our program in environmental law.”