Praising increase in diversity at Duke Law, alumni call for vigilance and vision on civil rights

Four distinguished Duke Law graduates with deep experience in civil rights and public law, on the bench, on Capitol Hill, and in private practice advised current students to apply both vision and vigilance to matters of racial justice and economic equality during a lunchtime panel discussion on Sept. 12.

Barbara Arnwine ’76, Karen Bethea-Shields ’74, Paul Brathwaite ’96 and Hezekiah Sistrunk, Jr., ’82, recalled their experiences as African American students at Duke Law, and shared their observations about and approaches to the fight for civil rights during the discussion moderated by Dean David F. Levi.  The Black Law Students Association hosted the event which was sponsored by the Duke Bar Association and the Dean’s Blueprint Fund.  It was organized as part of Duke University’s commemoration of the desegregation of its undergraduate program in 1963, two years after the Law School began admitting black students.

Getting their start at Duke

Repeatedly noting the diversity of their student audience, the panelists agreed that their Duke education had prepared them well for their careers in law and politics. 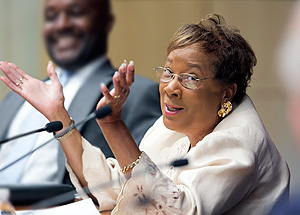 “I came to Duke with a vision.  I wanted to help poor people and black people,” said Bethea-Shields, one of the Law School’s first three African American women students.  Now a trial lawyer in Durham, Bethea-Shields became Durham County’s first female judge in 1980, serving five years on the bench.  “Duke prepared me for being a trial lawyer and for doing anything I wanted to do in law,” she said.  “Don’t let anybody make you doubt yourself.”

“I like knowing that Karen and so many of us who came through that period were trailblazers,” said Arnwine, the president and executive director of the national Lawyers’ Committee for Civil Rights Under Law, who is internationally renowned for her work on such matters as the passage of the Civil rights act of 1991 and voting rights.  “It was a different era for women, and it was a different era for African Americans.” 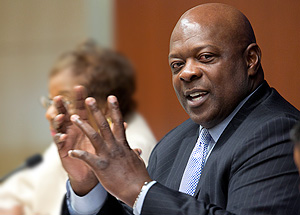 Sistrunk, a national partner of The Cochran firm and managing partner of the firm’s Atlanta office, recalled being one of just seven minority graduates in his Duke Law class. Although he knew that he wanted to have some involvement in civil rights work, “Duke wasn’t a school that prepared you for that,” he said.  “It was a school that prepared lawyers to move on to Wall Street and to big firms.  After law school I went to one of the largest litigation firms in the Southeast and I was able to thrive there because of what I learned at Duke.  It was a majority firm.  And one day, I said … ‘Wait, there’s something not quite right.’ And I went out on my own and did something different.  I thought I’d create my own bully pulpit to see if I could foster and create change in the world that I lived in.” 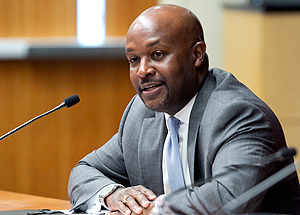 Brathwaite, who also holds a degree in public policy from Duke, joked that he got “a beautiful wife, two degrees, and a whole bunch of debt from Duke University.”  In fact, said Brathwaite, who served as executive director of the Congressional Black Caucus before joining the Podesta Group in Washington, D.C., where he is a partner, he and his parents were making “an investment” in his future.  He noted that 50 years represents only about a generation-and-a-half of African Americans at Duke.  “It is not a lot in the grand scheme of things at all.  It’s just now coming to the time that you can say, ‘My son, or my daughter is going to law school.’”  Voting rights in the South span a similar era, he observed.

On civil rights, a call for “determined, purposeful, dedicated action” 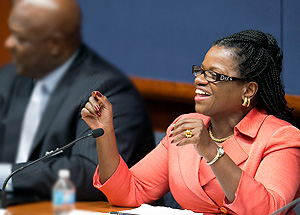 Racial progress follows a non-linear, zig-zag trajectory, said Arnwine.  “You make significant progress and all of a sudden there’s backlash or there’s retrogression, and progress can go backwards.”  The United States is “in a zig and in a zag” at the same time, the observed, with President Obama and other leaders of color holding office at the same time “some of the worst voter suppression this country has ever seen” is going on in states like North Carolina.

“My advice to everyone, always, is that when you look at any situation … if it’s not diverse, if it’s not inclusive, then the first question you have to ask is, ‘What are the barriers?  What can I do about changing it?’”  Arnwine commended Levi’s efforts to directly address issues of diversity, public interest, service, and civil rights at Duke Law.  “I love that, because that’s the only way you do it – by determined, purposeful, dedicated action,” she said.

Also noting Levi’s efforts in “trying to expand the scope of Duke and make it look more like America” Sistrunk said, “We’re at a point with civil rights in America where we need to be vigilant.  We’ve made a lot of progress, but we can’t sit back and rest on our laurels.

“That’s where you guys come in,” he told his student audience.  “And that’s where I see our country starting to move forward.  This law school class looks like what America should look like.”

Asked by Levi to predict the future for progress and pitfalls on civil rights, Arnwine said that demographic shifts do not guarantee social change.

“The fact that we will have significant demographic change in this country does not mean the plantation nature of the caste system that exists around race in our country and culture will cease to exist,” she said.  Having helped draft the post-apartheid South African constitution, Arnwine recalled the idealism she encountered  during that country’s transition to majority rule, as  people of all ages and walks of life called  for a country that would be  gender equal, multicultural, multiracial, and guarantee equality for all citizens.

“The caste system is called by different names now,” said Bethea-Shields.  “It’s called the school-to-prison pipeline, it’s called for-profit prison, it’s called taking away the rights of those people who are convicted of felonies.”  She told students that one way authorities controlled freed slaves following emancipation was by making sure they went through the criminal justice system.  “We’re doing the same thing today,” she said.

“You, as lawyers and future lawyers, must look behind all the laws that come down and try to find the agenda.  What’s the history behind these laws?  What happens if you’re convicted [of a felony]?  You can’t get housing, you can’t get public assistance, you can’t get into schools.  There goes your education and your economics.  So those people are controlled,” she said.  “So therefore when we look at certain types of laws, we have to understand that criminal justice is part of civil rights.

“So you, as future lawyers, start being historians right now and start looking behind all the laws and see if there are any hidden agendas there that try to take away the rights of certain groups.  I’m optimistic that you have enough young people in here to stand and say, ‘That’s not right, and we’re going to do it the right way.’”

“We have to be very deliberate and very clear,” added Arnwine.  “It’s very important that we in this room, we throughout this society, take up a clear vision of an America that is radically different than the vision that somebody else had.”

“Economic status tells how far integration has really come and the margins around economic status have not moved at all substantially for African Americans,” said Arnwine, calling the fact that 75 of 200 top major U.S. corporations have no blacks on their boards “telling.”

Sistrunk agreed.  “The true, true foundational basis for us getting civil equality is going to be economic equality,” he said.  “Until we find a way to make the laws of this country operational for everybody, and have everybody on the same playing field economically, and have the same opportunities economically wherever you are, we’re not going to have true equality.  That’s just the way it is. We’re in a culture that’s based on money and finances.”

Litigators have a special role to play in creating and sustaining change by addressing “individual grievances” and instances of discrimination in court, said Sistrunk who specializes in complex litigation and has tried more than 300 cases. “What’s great about being on the ground trying cases is that you recognize that changes in the law that lead to civil justice and civil and economic equality don’t just happen at the top. “

Responding to a student’s observation on the devastating impact of the economic crash and some bank practices on communities of color, he discussed his firm’s involvement in lawsuits against financial institutions.  “We have sued banks and other institutions to force them to sort of replenish and repay individuals and in some situations force them to give back to municipalities and counties – to recreate the equities that have been stripped from these communities.”

A call for students to get involved

Sharing his perspective as a political consultant, Brathwaite urged students to get involved in the political process.  “The issues and challenges this country has are not necessarily being addressed by the political leaders,” he said, adding that neither the president nor Congress will act on an issue if “not compelled” to do so.  “If we don’t like the law, we figure out ways either with our government or with our judicial system to change the law.  That’s what all of you are learning and every single one of you can be that change in whatever sphere you choose to enter.”

Bethea-Shields called on Duke Law students to volunteer as mentors to at-risk youth in Durham.  “If I see them, they’re in trouble with the law.  They need models they can look to so they don’t have to come to my office.  They need to see they have opportunities other than what they have on the street.”

“You have to figure out where you stand,” said Sistrunk, telling students to look for inequalities that need to be addressed.  “You are at one of the best schools in the world that gives you the foundational elements to go out and create that change.  We’ve done a lot of good things in this country.  Looking around this room, I’m emboldened.  My spirit is emboldened by looking at the room.”

Recalling the sense of isolation he often felt as one of only three black male students in his Duke Law class, he advised students to build relationships with their classmates.

“Since I’ve left Duke, I’ve learned that one of the most important things you will ever do in your life is to create connections with the people sitting next to you.  Because ultimately that’s how we’re going to change things,” he said.  “Reach out. Get to know people.  Touch them.  Know that your future as a lawyer doesn’t start after law school.  It starts as a 1L.”