Richard Williams discusses the history of the Paul B. Williams Law Scholarship

Why would a family with no educational connections to the law, to Duke University, or to the state of North Carolina endow a scholarship at the Law School? According to Richard “Tex” Williams, the son of Paul B. Williams, it just made sense given his father's belief in the importance of education and of giving back.

“Dad was unable to afford college and was a self-made man,” Williams says. “He had accomplished his success on his own and he strongly believed in fostering education and scholarship, especially for those who couldn’t afford it. Along with his belief that it is better to give than to receive, my wife Barbara and I are proud to carry on these values.”

Paul B. Williams, Inc., a Greensboro based business that supplied copiers to Duke, established the Paul B. Williams scholarship in 1990. It is one of several scholarships at the Law School in honor or memory of a benefactor’s loved one.

A New Jersey native, Tex Williams came south from New York in 1985 to sell the Paul B. Williams company after his father’s death. Instead, he fell in love with the business and lived in Greensboro for the next 18 years before retiring to California. Along the way he partnered with Joseph Pietrantoni, Duke’s associate vice president for Auxiliary Services at the time, to create the “Coin-Op Program,” a program in which the proceeds from copiers supplied by the Paul B. Williams Company funded the Williams Scholarship, as well as other programs at the University.

“We began the Coin-Op Program with Duke University in 1988, and had 300 to 400 copiers on campus,” Williams recalls. “This represented about 60 percent of all the copiers being used at Duke at this time. Many were being used in the libraries.”

“The idea really came from Joe Pietrantoni. Duke was a very important customer for us, and our company owned the coin-op copiers in the libraries. When the program began, copies were 10 cents apiece. When students or faculty were making copies, instead of coming back to us, the revenue - less Duke’s administrative expenses - would go to scholarship funds. Since the Law School library was using copies too, we created a special scholarship for Law School students that would be funded by the machines.”

Over time, proceeds from the Coin-Op Program, which is still administered by Duke’s Office Products Department, endowed the Paul B. Williams Scholarship, along with other programs that benefited Perkins Library and the University as a whole.

Williams serves on the Duke University Library Advisory Board and returns to campus from California for annual meetings. The thank you letters he and his wife receive each year from current Williams Scholars also keep them connected to Duke.

“I don’t get a chance to meet these students, but I keep all of their letters, and it gives Barbara and me great pleasure to learn about them and to see the value of the program we created over 20 years ago,” Williams says.

Since the Paul B. Williams Scholarship was first awarded in 1994, it has supported nearly 20 named scholars and continues to support several named scholars each year. And it all started with a handful of dimes at the library. Dad would be proud. 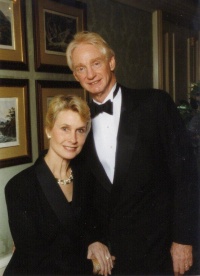