Richman chronicles the centrality of family, ethnicity, and community to diamond trade in new book 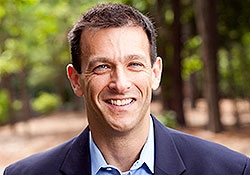 Diamonds are exceptionally valuable, highly portable, and, when uncut, virtually untraceable, a trio of characteristics that make them extraordinarily vulnerable to theft. Yet on 47th Street in Manhattan, diamond merchants — many of them orthodox Jews — have long relied on handshakes to secure credit transactions involving millions of dollars’ worth of gems. And when disputes arise, the traders resolve them privately.

While pursuing a PhD in organizational economics, Barak Richman became intrigued by how these “diamontaires,” industry intermediaries who trade, cut, and polish diamonds, enforce their seemingly informal contracts. Having since spent almost 20 years studying the idiosyncratic operations of a sector with tight ethnic, social, and familial networks at its core, Richman, the Edgar P. and Elizabeth C. Bartlett Professor of Law and Business Administration, calls it “the paradigmatic example of a stateless economy.” He recently spoke to Duke Law Magazine about his new book, Stateless Commerce: The Diamond Network and the Persistence of Relational Exchange (Harvard University Press, 2017). 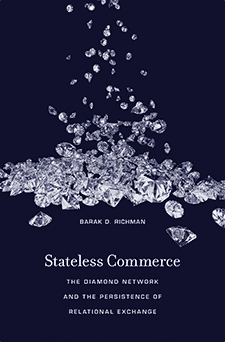 Duke Law Magazine: Your title refers to the fact that diamond traders steer clear of the court system to resolve disputes and argue that courts would be unable to do so in any event. Why?

Barak Richman: The core transaction of the diamond market is the credit sale: I give you diamonds today and you promise to pay me in 30 days or 60 days. How do I know you will? If you run off, I can sue you and get a default judgment, but it’s not going to do me any good: You’re gone. So on an elemental level, the credit sale cannot be enforced by a court.

If courts are not available — and courts are what the whole economy relies upon to enforce contract rights — how then are transactions secured?  The key, simply, is to ensure that the consequences of breaking a promise will be worse for the promisor than keeping the promise.

The diamond industry achieves contract compliance through a remarkable network of enforcement mechanisms, and the key to understanding how cooperation is sustained hinges on understanding who the diamontaires are. The industry is dominated by networks of families and ethnically homogeneous communities, and diamontaires know that their industry, family, and community standing will deteriorate if they break their promises. In the diamond industry, only people who have good reputations are able to transact with others, but the central insight is that only certain individuals crave that reputation.

These diamontaires — from the families and communities that comprise the trade — know they are assured a lifetime of economic and community rewards if they maintain a good reputation.

DLM: How are disputes resolved?

BR: There’s a very elaborate and formal mechanism of private industry arbitration.  Arbitrators are elected by members. They are well-respected members of the industry community and also of the ethnic community. They hear the parties’ complaints in secret, and issue a ruling.  And for many reasons, it’s preferable to suing in court. It’s less expensive and you gain some industry expertise.

But the role of these arbitrators has been largely misunderstood. We tend to think of arbitrators and arbitration as an alternative to going to courts. But the real value of a court is in the ability to enforce its ruling. For that reason, traditional arbitrators, both international and local, both industry and commercial, piggyback off of courts. In the diamond industry, the community and industry sanctions are the real replacements for courts.  Arbitration therefore is only an information mechanism — a way of identifying for the community who has broken a promise.

If you think about it, this puts arbitrators in a critically important role.  If we’re going to mobilize a community in a very coercive way to punish people for breaking promises, we’d better make sure we identify the right people. If arbitration was deemed to lack credibility, you wouldn’t be able to mobilize the communities and the industry in such a forceful way.

You might say that the system of arbitration is really just the tip of the iceberg. It’s the only thing you see when the real foundation is under the water.

DLM: Antitrust is one of your areas of expertise and you examine the ways that the industry on 47th Street has come under periodic scrutiny.

BR: 47th Street can be described as a form of a cartel: You have a whole bunch of diamond merchants who organize themselves through an association: They have by-laws, they obligate each other to certain rules, and, most critically, they mobilize to punish people who have misbehaved. That might amount to a violation of section 1 [of the Sherman Act]. It is a cartel punishing a deviator.

But if this mobilization to sanction or punish people who have misbehaved is essential to making the industry work — that’s basically my core observation — then perhaps it’s both necessary and procompetitive.  In short, we might need to allow for certain cartel-like behavior if courts cannot do what we normally need them to do.

Nonetheless, we have to be very aware of the danger of cartels, or self-governance, replacing the role of courts. We see self-governance all over the U.S. economy, and the law frequently gives some latitude to professionals who set up codes of ethics.

Having said that, just like for doctors and lawyers and professions where there is self-governance, there is a real threat to the consumer, where anti-competitive collusive behavior can mask itself as codes of ethics, and where the industry can organize itself in a way where it amasses power that is antithetical to how we think markets should work. And in the diamond industry, although you’ve seen coordinated cartels to do lots of good things like enforcing contracts, you also have seen coordinated collusive behaviors that have done some anticompetitive things.

DLM: You write that diamonds are now one of India’s biggest exports.

BR: The Indians entered the industry, with little difficulty, for the same reasons Jewish networks had dominated it for the better part of a millennium. Diamonds were produced in India for the first millennium that we had a diamond industry. So there is some endemic expertise and familiarity. But what’s really going on is that you have ethnic networks that proliferate throughout the Indian subcontinent figuring out how to use their natural organization to meet the needs of the diamond industry. For the same reason that Jewish networks and communities can enforce diamond transactions, Indian networks can enforce diamond transactions. That’s the prerequisite. And once some Indian families learned of the possibilities, the profit opportunities in the diamond industry, they very naturally leveraged their family networks to do what they needed to do. Then the industry started to globalize the same way the auto industry did, and manufacturing went from New York and Antwerp to India, where it costs pennies on the dollar.

There are very specific sects in India that are the analogs of the “diamond-studded paupers” — [the salaried cutters and polishers] — in the Jewish community. These are people whose families and ethnicities are very intimately entwined with particular villages, where flight is not a possibility, and for that reason, they can be entrusted with diamonds.

You see that in a number of different settings. The Jains of Palanpur, a town in Gujarat, have led the diamond expansion in India. And then you have this fascinating set of couriers, the Angadias, whose basic job is to transport diamonds in their pockets from Mumbai to Surat. There are multiple sects who are finding their own niches within the industry.

DLM: You write that the traditional mode of operation based on ethnic and family networks is eroding in the industry. How?

BR: There is a classic narrative where an old industry that is somewhat insulated and secluded from market forces retains some old-world, anachronistic charm, but once they are subjected to market forces, the architecture erodes. Some of that is going on here, but that’s really not the story. The mechanisms to retain community are as strong as ever, both in New York and in India. What’s really going on now — and you do see a breakdown of trust, of the social and economic fabric that was tying 47th Street together — is that significant changes to the industrial structure of diamond production has started making long-term cooperation less profitable.

Consequently, though we still think of the diamond industry on 47th Street as this bastion of trust, it’s not anymore, perhaps tragically. But it’s not just that we are growing into a more homogenous world. De Beers no longer has a [mining] monopoly, and it is pursuing different strategies now that it is a competitor, instead of a collaborator, with 47th street. Internet sales are also making inroads into marketing certain kinds of diamonds. And bank policies in India, and possibly some in Israel, another diamond center, are ushering in new sources of competition to 47th Street — competitors who are less tied and tethered to the future of the industry.

DLM: You also write about some breakdown of the private arbitration system.

DLM: Where and in what industries will elements of stateless commerce be retained regardless of changes in the diamond trade?

BR: You’re always going to have relationships that, for whatever reason — economic, social, cultural, family — are going to be reliable and are able to facilitate exchange.

Even as the diamond industry breaks down, the building blocks of our social and family relationships are not going to be break down. It illustrates how hard it is to support a global, stateless industry, but we will continue to see regional pockets of statelessness.

The book ends with a nice little story about an immigrant Vietnamese dry cleaner I met in law school — he is someone who was able to obtain an unsecured loan from his fellow community members precisely because he is very beholden to the community. His experience reveals that there will always be pockets of “stateless” relational transactions that will fuel economic activity. You also can see it in the developing world where formal courts remain unreliable. It illustrates how pervasive this mode of economic organization is, and it continues to illustrate the limits of courts and the need to make courts more reliable and more accessible.