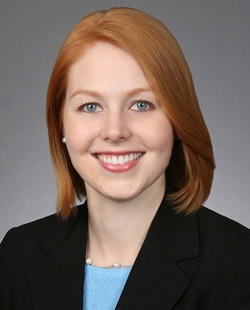 Philanthropy has long been routine for Sarah Hawkins Warren.

A litigation associate at Kirkland & Ellis in Washington, D.C., Warren was just 17 when she started a foundation to support the construction of a high school in Nyeri, Kenya.

She and her classmates at Westminster Schools in Atlanta had been sending used books and other materials to help Mount Kenya Academy in Nyeri since elementary school.  But after spearheading a spring break trip to the school during her senior year, Warren saw the need for a high school at the academy.

“We realized that in Kenya, elementary and junior high school education is fairly common, but the real barrier to success is that kids don’t go to high school,” she says.   “After eighth grade, a lot of kids who have performed well in school will go home to be farmers or goat herders, and they don’t have anywhere to go for high school. Interestingly, you can also go to college, but there’s this high school gap.”

Four years after Warren started the Mount Kenya Academy Foundation, the high school became a reality. The foundation now provides financial assistance to children who could not otherwise afford tuition and supports strategic planning to promote the school’s success.

“Now we’re seeing the kids go on to university and do really great things,” Warren says. “We hope they will stay in Kenya and prevent the brain drain that can occur when the smartest students head to the UK or to the U.S. for education. We’re encouraging them to be the next leaders of Kenya.”

In 2002, as a Duke sophomore majoring in public policy and Spanish, Warren “caught the politics bug” while volunteering in Salisbury, N.C., on behalf of Senate candidate Elizabeth Dole. She worked in the Bush White House as an intern the following summer.

“I had applied to law school and thought I was going to go straight through,” she says. “A month before graduation I called my parents and told them, to their surprise, that I was going to defer a year and go back to work on the 2004 re-election campaign for President Bush.”

After the campaign, Warren continued to work on the Inaugural. She then returned to the White House as deputy press secretary, in the Office of Management and Budget.

Warren says her White House experience reinforced her plan to go to law school; every key position seemed to be held by an attorney.

“Whether it was a national security advisor or a domestic policy advisor or even the head of communications at the time, they were all attorneys,” she says. “And the skills they had learned as attorneys translated into so many other things that it made me realize that there are many things out there that you can do with this skillset.”

“One thing I’ve observed in the years since I’ve left is that Dean Levi is trying to help people understand what the practice of law on a day-to-day basis is really like. That’s a tremendous service to the students and it’s made our students more marketable. Law firms understand a Duke Law graduate is somebody who might really understand what it means to be a first-year associate or, frankly, to do any job.”

She also serves on Duke University’s Annual Fund Executive Committee and is the vice president of the National Board of Directors for Duke’s Young Alumni Development Council.  She received the LAA’s Young Alumni Award for her volunteer service during Duke Law’s reunion in April.

“It’s always been a no-brainer for me to give back to Duke,” she says. “I believe really strongly, and it’s the way my parents raised me, that when there are institutions that provided opportunity for you, [and] where you’ve had good experiences, it’s your obligation to give back – and you do it cheerfully.”