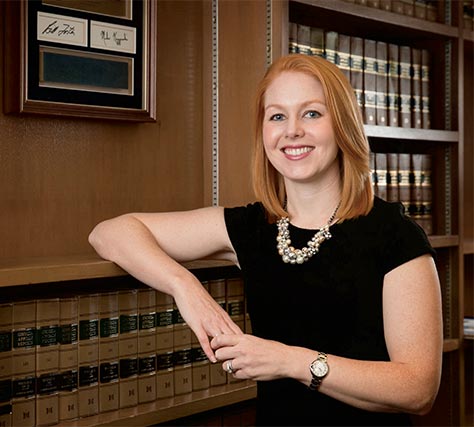 A “double Dukie” — she majored in public policy and Spanish as a Trinity undergrad — Warren makes her allegiance clear in her office with a display that includes a historic piece of the Cameron Indoor Stadium floor.

Sarah Warren was on maternity leave after having her second child when she was promoted to solicitor general for the state of Georgia, after less than 18 months as the deputy. Weeks after stepping into the post on Jan. 1 of last year, she argued her first case in the Georgia Supreme Court, and on Oct. 30, 2017, made her debut in the United States Supreme Court — a first for a Georgia solicitor general — by arguing for the respondent in Wilson v. Sellers. “It’s been a crazy year, but it’s been a big year,” she says.

An Atlanta native, Warren clerked ﬁrst for former Chief Judge J. L. Edmondson of the U.S. Court of Appeals for the Eleventh Circuit and then for Judge Richard J. Leon of the U.S. District Court for the District of Columbia before joining Kirkland & Ellis in Washington, D.C., as a litigator. She had just settled into partnership at the ﬁrm when the opportunity arose for her to return home and enter public service. Warren, a member of the Law School’s Board of Visitors, talked to Duke Law Magazine about her transition from private practice to public service and the job that, she says, “was too good to pass up.”

“I would encourage law students to think about going to work in their states, because you get tremendous experience at a very young age and you’re helping to make decisions or helping to argue cases that can have an immediate impact on the people of your state.”

DUKE LAW MAGAZINE: What made that offer too good to pass up?

SARAH WARREN: I loved my job at Kirkland. I got great experience as a litigation associate, trying cases and running big cases. And right about the time I became a partner there, I had the opportunity to work on a case in Georgia, Florida v. Georgia. It stems from protracted, decades-long litigation between Georgia and Florida over water apportionment. Georgia had prevailed in the Eleventh Circuit, and then Florida brought an original action against Georgia in the U.S. Supreme Court.

Kirkland was retained as counsel for that case, and I helped run [Georgia’s defense team], so I came home [to Atlanta] a lot to interview witnesses, to work on trial strategy, and to prepare the case. I loved working with the state employees who were involved, people in our Environmental Division and in the Department of Law. So when there was an opportunity to potentially work for the attorney general, who at the time was my client, and who I really liked, I decided to make the jump. The solicitor general at the time was Britt Grant, a former Kirkland colleague and a good friend. She’s now a justice on our Supreme Court. I came home to work as her deputy.

It was, of course, a huge move, because my husband and I liked being in D.C., and we had a young child at the time. But I just loved coming in every day and having cases — not just the water case, which I continue to work on — but all kinds of cases where the primary goal was serving the people of the State. These involve a wide range of constitutional issues, legislative issues, and legal issues that have policy implications, so it’s a very fulﬁlling job. Every day brings something new.

As solicitor general I run a unit of ﬁve. So I’m a full-time manager and a full-blown attorney. I’m writing briefs and arguing orally, and I’m also collaborating with other attorneys in my ofﬁce on their briefs. I’m also an advisor to the attorney general on issues of constitutional law that come up and on decisions regarding cases and briefs that Georgia may join. So I’m wearing all these different hats all the time, and it takes a lot — but I like the challenge.

DLM: How did you hone your skills in appellate litigation and develop the conﬁdence to take on the SG job at this relatively early stage of your career?

SW: My clerkship for Judge Edmondson on the Eleventh Circuit was a wonderful appellate experience and a mentorship. Judge Leon on the ‘DDC’ was great for honing some of my trial skills. And, of course, having the experience of taking depositions, and going to trial, and managing big cases and huge caseloads for clients at Kirkland was formative.

I’m a litigator by training, so I bring a unique skill set to an appellate role. When you come from a litigation perspective, you understand all the building blocks that lead up to an appeal. And it also gives you a very fresh perspective. I come to it with the perspective of, ‘I’m not a subject-matter expert in this particular area, like the trial lawyer was. I have to break this complex concept down to such a fundamental building-block level that the person who picks up this brief for the ﬁrst time can understand it without asking any further questions.’ That’s the perspective that helps an appellate brief be great, so that the law clerk or the judge or the central staff attorney or the layperson who’s reading it will understand those concepts clearly. And that’s the perspective I try to bring to my work, along with all of the good writing skills and the persuasiveness and advocacy that I started learning at Duke and developed throughout my career.

DLM: What stands out from your ﬁrst oral argument in the U.S. Supreme Court, which seeks to resolve the question of the standards and presumptions that a federal habeas court makes when it is reviewing a last state court adjudication on the merits that is a summary decision?

SW: I was the second person to argue the second case of the day. So I had to sit through an hour of argument in a different case that my friend, who is the solicitor general of Texas, was arguing. And then I had to sit through the 30 minutes of [petitioner’s argument] in our case. It’s hard to wait when you are ready to get up there and make your argument.

Once I started arguing, it was a very ‘hot’ bench. About halfway through, there was brief pause, after I had answered a long series of questions.

During that pause I stood there and I looked all the way across the bench and all the way back, and just sort of took in the image of all of the Justices there in front of me, and was able to appreciate in that moment what a tremendous opportunity it was and how honored I was to represent the State.

Being the ﬁrst Georgia SG to have argued in front of the Supreme Court was a really special experience for me, and it was wonderful to have my parents, my brother, and my husband there to share the experience.

DLM: States have been very active litigants against the federal government in recent years — certainly through the last administration. What do you make of that?

SW: Most people in the country aren’t aware of how important state governments are. We always look to Washington, D.C., as the epicenter of policymaking and legislation, [and it] is an epicenter. But where the action is really happening, where the decisions are being made that effect people on a day-to-day basis, is in the states. I would encourage law students to think about going to work in their states, because you get tremendous experience at a very young age and you’re helping to make decisions or helping to argue cases that can have an immediate impact on the people of your state.

I think it remains to be seen what the enduring theme is for state attorneys general and the solicitors general who work for them. Certainly in the past administration there were a number of multi-state lawsuits premised on concerns about federal overreach and the federal government reaching into areas that are traditionally reserved for the states. We’ll have to see how that plays out over the next few years.

DLM: Who are your mentors and advisors?

SW: I still talk a lot with the judges that I clerked for and have a great relationship with them. I have made it a mission to always ﬁnd a mentor wherever I’m working. So I have a great support system of people I worked for in Washington before I was an attorney, people who I still call and rely on for advice. I view the attorney general here as a friend and mentor — he’s also my boss and has more management experience than I do, so I can learn a lot from him in that regard. There are also a lot of people in Atlanta business leaders and others in the community who I can rely on for advice and encouragement. And I rely a lot on my husband to give me good pep talks. He’s a really bright management mind, so I rely on his advice a lot. And my parents.

I try to create a large net of people that I can rely on to get through the tough parts of the job and I’ve been very lucky.

DLM: What do you like best about your job?

SW: Being home and representing the people of my state. Secondary to that, it’s just tremendous to be in a job where your brain is being exercised so much every day. It’s totally exhausting, in the best possible way, because you come to work and think you’re going to be doing one thing and you end up doing that thing and 10 other things. And I work with a great team of attorneys, not just in my Solicitor General’s Unit, but across the Department of Law.