Katherine Crawford Yarger ’08 and Emily Kennedy ’10 will clerk for Associate Justices Clarence Thomas and Samuel Alito, respectively, during the Supreme Court’s 2012–2013 term. They will be the fifth and sixth Duke Law alumni to clerk at the Supreme Court over three terms.

A litigation associate at Wheeler Trigg O’Donnell in Denver, Yarger previously clerked for Justice Allison H. Eid of the Colorado Supreme Court — a former Thomas clerk — and Judge Neil M. Gorsuch of the United States Court of Appeals for the Tenth Circuit.

“It does not surprise me that Katie is clerking for Justice Thomas; she is an outstanding lawyer and a very nice person,” said James E. Coleman Jr., the John S. Bradway Professor of the Practice of Law and co-director of the Appellate Litigation Clinic in which Duke Law students have the opportunity to handle appeals in the Fourth and District of Columbia Courts of Appeal. “Katie was among the first group of students to enroll in the Appellate Litigation Clinic. She started the tradition of excellence that has marked the work of the students who followed her. When her team won their habeas case in the Fourth Circuit, a lawyer who followed cases in the circuit wrote to congratulate her, pointing out that not many lawyers had won such cases in that court.”

Professor Doriane Coleman had similar praise for Kennedy, whom she taught in her Children and the Law class as well as first-year Torts; Coleman praised Kennedy’s “excellent analytical mind, deep knowledge of and facility with legal doctrine, and a balanced, thoughtful, and especially creative approach to complicated legal issues.”

Currently a litigator at Kellogg Huber in Washington, D.C., Kennedy previously clerked for Chief Judge Alice Batchelder of the United States Court of Appeals for the Sixth Circuit.

“Dean Levi has been tremendously helpful and supportive throughout this process, and I know that it wouldn’t have worked out without his help,” Kennedy said.

“I think that Duke Law is an incredible place to begin your legal career, and I feel grateful for the opportunities the school provided me,” said Yarger. “I firmly believe that I would not be in the position I am now if I had not gone to law school at Duke. I’m very grateful to all my professors, and to the school, for their support.”

Allison Jones ’07, Garrick Sevilla ’07, and Amy Mason Saharia ’05 clerked during the 2010–2011 term for Justices Thomas, Alito, and Sonia Sotomayor, respectively. Sarah Campbell ’09 is clerking for Alito during the current term. 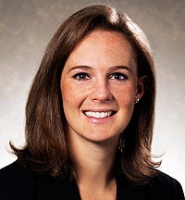