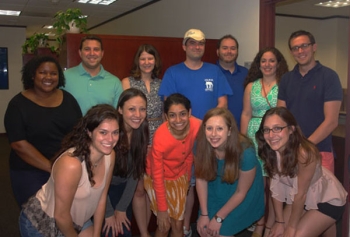 Just before the spring semester came to a close, nineteen Law School students came together to express their gratitude to those who donated to Duke Law throughout the year.

On May 6 and 7, two teams made calls to thank Law School donors for their generous support. “The spirit of my donors’ contribution and their model of stewardship is really inspiring me to recognize how many alums are engaged in helping Law students achieve their goals,” said Thank-a-Thon team member, Karlee Blank ‘15. “At the end of the school year, looking at all the events the alums come back and engaged in, it's nice to take time and thank them for all of their support – particularly the alums who don’t have a chance to come back.” 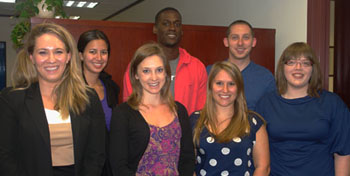 In addition to the two teams making phone calls, four recent Law School graduates penned letters to international donors and other supporters. Over the span of two evenings and about eight hours, the students contacted and thanked over 800 donors.

Chelsea O’Donnell ‘14 was glad she had the opportunity to express her appreciation before she graduated. “Donations from donors was part of what allowed me to come to Duke and so thanking donors was something I really wanted to do before I left Durham. So many of us are at Duke because of the generosity of alumni, so giving back in some small way and saying thank you is really important.  Just saying thank you – without asking for anything – really means a lot to them.”