As he contemplated retiring from a 35-year military career, Maj. Gen. Steven Lepper says he “was looking for something that would provide me with a sense of satis­faction and an opportunity to make a difference.” He also wanted a job that would draw upon the leadership skills and expertise in international law he honed as an Air Force lawyer serv­ing at the Pentagon and around the world, most recently as deputy judge advocate general.

Lepper found what he was looking for with the American Bar Association’s Rule of Law Initiative (ROLI), an international development program that works with partners in almost 60 nations to build sustainable institutions for the delivery of justice, human rights pro­tection, and economic development. The position is a natural fit for Lepper, who has been engaged at the forefront of some of the military’s most significant legal developments over the last four decades, including the integration of lawyers into humanitarian aid missions, the evolution of law as a front-line tool of war, and the repeal of the law banning homosexuals from serving openly.

“It’s been a smooth transition for me,” says Lepper in March, just a few weeks into civilian life. “I’ve worked in a number of rule of law initiatives from the United States government’s perspective over the years and now, in the private sector, the ultimate objectives are the same.”

An international focus comes naturally to Lepper, whose mother was Austrian and whose father’s Air Force career took the fam­ily around the world, to such places as Libya, Taiwan, and England, where Lepper was born and went to high school — and where he met his wife, Kathy, who was also raised in the service. Lepper returned to England in his second JAG Corps assignment out of law school, and decided to make “represent­ing the United States government abroad and representing the Air Force abroad” the focus of his legal career.

He started by getting an LLM in interna­tional and comparative law at Georgetown through an Air Force program. “That set up a series of assignments that gave me more and more depth and breadth in the inter­national law area,” Lepper says. He soon became chief of operations law within the International and Operations Law Division at the Pentagon, a position that involved him in the development of policy and practice regarding international humanitarian law that is foundational to Air Force operational practice as well as other aspects of deploying U.S. forces in combat or peacetime.

Before long, he was promoted to deputy legal counsel for the chairman of the Joint Chiefs of Staff. Working first for Gen. Colin Powell and then Gen. John Shalikashvili, Lepper spent two years helping the U.S. address major global issues and crises.

“It gave me a great foundation in how the United States views and practices international law,” he says. “I learned a lot about international law at the Department of Defense level, at the inter-agency level working with national security staff and with the State Department, and with the White House on such things as develop­ing the Rwanda and Yugoslavia war crimes tribunals, negotiating agreements with the United Nations, and helping in the law of war development process with the International Committee of the Red Cross in Geneva. I was then able to go overseas and build on that foundation.” 44 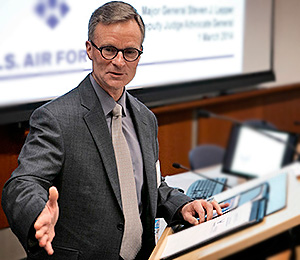 Lepper delivered an address on contemporary ethical issues in national security law at the Duke Center on Law, Ethics and National Security’s spring 2014 conference on March 1.

As a freshly minted lieutenant colonel, Lepper became the senior U.S. military attorney in Turkey, with responsibilities that included oversight of the U.S. humanitarian relief operation for the Kurdistan region of Iraq following the first Gulf War. Obtaining a master’s degree in strategic studies at the National War College after that positioned Lepper, by then a colonel, for senior leader­ship within the Air Force. At that point, he received a yearlong appointment to the mili­tary trial bench.

“Presiding over trials around the country deepened my understanding of military jus­tice and criminal law and proved very help­ful in subsequent positions,” says Lepper.

The first of those was service as execu­tive officer to the Air Force judge advocate general, a post that engaged Lepper with JAG Corps members around the world. He was then recruited to lead the newly formed Executive Issues Team, which he describes as “the crisis communications team” of the Air Force.

Three weeks before the 9/11 attacks, Lepper left the Defense Department to become the senior U.S. military attorney in Japan, which put him on the front line of negotiations with the Japanese government over the Status of Forces Agreement that has underpinned America’s military presence in the country since World War II. Next, after being based in Hawaii for two years as the senior Air Force lawyer in the Pacific, he headed back to the Pentagon to assume command of the Air Force Legal Operations Agency, which oversees “legal assets” that do not fall under the purview of operational commanders, such as civil litigation, complex criminal litigation, and criminal defense. During his tenure there, he helped substan­tially reorganize the JAG Corps to make it the professional organization it is today.

In 2006, the Air Force promoted Lepper to the rank of brigadier general, and he became general counsel to Air Mobility Command, which he calls “the world’s larg­est airline,” running all of the tankers, airlift assets, and air medical evacuation missions throughout the world. Lepper integrated lawyers into the emergency command center that controls global mobility operations by the minute, and on the contingency response teams that deploy first to stricken areas. One of the first missions to benefit from the initiative was the response to the 2010 earth­quake in Haiti.

It’s been really satisfying to act as an ambassador of sorts for the United States military.”

“I sent a lawyer in on the first team that went to Haiti,” Lepper says. “That lawyer was able to develop relationships with the local authorities and with the U.S. embassy, and it resulted in the airlift of more than 800 orphans to the United States to join pro­spective adoptive parents. It was a remark­able effort.”

Later in 2010, Lepper, as a major general, became deputy judge advocate general of the Air Force, succeeding Professor Charles Dunlap, now the executive director of Duke Law’s Center on Law, Ethics and National Security. Lepper was promptly appointed to the “Don’t Ask, Don’t Tell” review team charged with assessing the military’s readi­ness for a repeal of the law banning gays from serving openly. He credits the “remark­able” process of the review team that ulti­mately recommended the repeal to the presi­dent, the secretary of defense, and the chair­man of the Joint Chiefs of Staff, with helping him forge relationships across the branches of the military and with groups of people he might not otherwise have met. He calls the outcome of that work equally remarkable.

“There has been very little controversy surrounding the repeals of both Don’t Ask, Don’t Tell and the Defense of Marriage Act in the military,” he says, admitting that many people on the team were pessimistic about being able to achieve the grassroots support needed to make any meaningful change when they began their work.

“But as we spoke to military members around the world, we came to understand that while there may have been a cultural resistance to having gays serve openly when we were young officers, we now have a new generation who don’t consider this an issue,” he says. Along with the general counsel for the Department of the Navy, Lepper led a committee that studied the legal and regula­tory implications of repeal so that policies and procedures that had “grown up” around the ban on homosexual service — such as those addressing dependents, privileges, and entitlements — could be changed quickly.

Lepper says he has found enormous sat­isfaction in serving as a lawyer in uniform, representing the United States among allies, friends, and adversaries. Attending Duke at a time when many universities didn’t wel­come the military on campus, he and other active-duty law students were “curiosities,” he recalls, but he enjoyed helping educate his classmates on what an Air Force officer does and what he would be doing after graduation.

“We formed lifelong friendships,” says Lepper, who attended his 30th reunion in April. “And through my Air Force career, I’ve developed friendships with a lot of friends around the world as well — colleagues and former adversaries. It’s been really satisfy­ing to act as an ambassador of sorts for the United States military.”