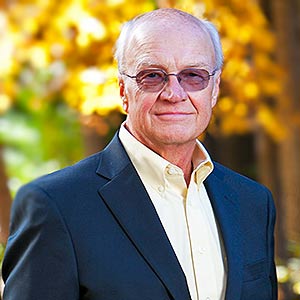 “You try to help the people coming behind you”

By his own estimate, Bob Davies is currently on his fourth career. Now a principal of a closely held group that owns assisted-living facilities around the country, Davies sums up more than 50 years in law and business simply: “I’ve had a wonderful career and a wonderful life.”

Davies, who attended DePauw University and Duke Law School on full scholarships, is equally succinct about what he expects from recipients of the Robert N. Davies Scholarship at Duke Law: “The only thing I ask is that when your turn comes, you try to help the people coming behind you. They will need your help.”

Davies’ first career was as a tax, securities, and transactional specialist at Baker & Daniels, the Indianapolis firm he joined following his Duke Law graduation, making partner in 1966. In 1984, he embarked on his second career as co-founder of a boutique firm, Davies & Leagre, where he continued his banking and securities practice.

During his years in practice, Davies was active in community service, continuing a family tradition. He served as legislative counsel to the Indiana governor, chairman of the Indiana Board of Corrections, and as a presidential appointee to the Committee on state and Local Government of the United States Cost of Living Council.

Davies left his law firm after three years to oversee the worldwide legal and financial needs of a private conglomerate.  He jokingly refers to the work as involving “a little cloak and dagger.” He once executed a judgment, obtained in Paris, against the government of Saddam Hussein for liquidated damages regarding the building of a brass-refining plant in Iraq. First, though, he had to find out where the Iraqi assets were located.

“We had information as to where things were, so we seized assets all over Europe and I went about selling them,” he recalled, noting the danger posed by Iraqi operatives opposed to the seizures.  “Only my wife and my secretary knew where I was, and I never stayed in the same hotels. It was fun.”

In 1993, Davies’ son-in-law, a fund manager involved in financing hospitals and senior care facilities, introduced him to assisted living as an emerging model of elder care. It was a niche bound to grow, his son-in-law explained, as the population aged and nursing homes and hospitals were becoming crowded. The two formed a partnership, joined by a third individual with deep experience in the health care field. The group has owned 64 facilities across the country and today owns 13 facilities, mostly in the Eastern U.S. Davies, who now lives in Sarasota, Fla., serves as general counsel, among other roles.

During a recent visit to Duke Law following a tour of three of the company’s North Carolina locations, Davies expressed pride in the quality of comfort and care offered to residents, including those with severely impaired cognitive functions.

“When I shave in the morning, I like to look in the mirror and think I’m doing some- thing worthwhile. Few people voluntarily move into assisted living, but it’s nice to know I’m making the situation a bit better,” he said.

A native of Gary, Ind., Davies was recruited to Duke Law by Dean Elvin R. Latty, whom he called “one heck of a salesman.”  Latty trumped full-tuition scholarship offers from two very prestigious law schools with his ability to secure a position for Davies’ wife as an art teacher with the Durham Public schools. Davies was at the top of his class of “really amazing people” all three years and stayed in touch with many afterwards.

Grateful for the scholarship assistance he received as a student, Davies funds a scholarship for art students at DePauw, where his late first wife also had studied, and has funded a scholarship at Duke Law since 2007. An observation from his DePauw fraternity brother, 1999 Nobel laureate Ferid Murad, inspired Davies to focus his support on scholarships.

“Ferid said that if he had needed to borrow money to go to college he could never have been awarded the Nobel Prize in medicine because he could never have worked in a setting where he was doing research for low pay,” Davies said. “His scholarships gave him freedom. That really hit home for me.”

The total gifts and pledges to the Davies scholarship fund now exceed $1.8 million, which includes matching dollars from the Stanley & Elizabeth Star Financial Aid Challenge Program.  The Robert N. Davies scholarship is given annually to a student with top academic credentials who also demonstrates financial need. It is currently held by Olivia Cole ’17, who said Davies’ support is helping her to realize her dream of forging a career in public service.

“I am immensely thankful for the generosity of donors like Mr. Davies,” she said. “Having had the opportunity to meet him, I can attest that the benefits students receive from making connections with alumni and donors go far beyond simple financial aid. Mr. Davies has been incredibly generous, not only through his donations to past and future Duke Law students like me, but also by passing on his knowledge, experiences, and advice.

“I will never forget this kindness, and hope to have the resources and opportunity to make a similar impact as a future alumnus.”