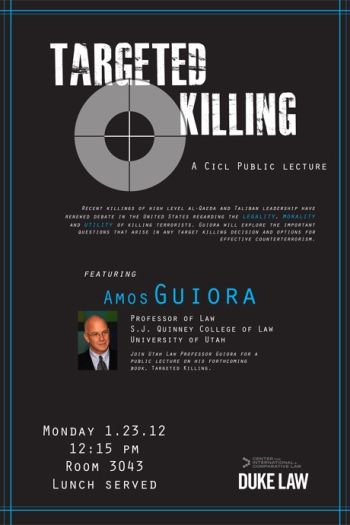 Join Utah Law Professor Amos Guiora for a public lecture on his book, Targeted Killing (forthcoming, OUP). Recent killings of high level al-Qaeda and Taliban leadership have renewed debate in the United States regarding the legality, morality and utility of killing terrorists. Guiora will explore the important questions that arise in any target killing decision and options for effective counterterrorism.

Recent killings of high level al-Qaeda and Taliban leadership, including Osama bin Laden during a black ops raid in Abbottabad, Pakistan, has renewed debate in the United States regarding the legality, morality and utility of killing terrorists. The discussion has focused on a number of issues including:
• the decision making process;
• the definition of a legitimate target;
• the definition of collateral damage;
• the definition of imminent threat;
• and effectively assessing intelligence information.

The Decision-making Process
Effective counterterrorism requires the nation state to apply self-imposed restraints; otherwise violations of both international law and morality in armed conflict are all but inevitable. Therefore, in any target killing decision, the following important questions must be addressed:

1) Can the target be identified accurately and reliably?
(Is target legitimate?)
2) Does the target pose a threat such that an attack at that moment is justified, or are there alternatives available?
(Is the intelligence actionable?)
3) What is the anticipated extent of collateral damage?
(Is the response proportional?)

To answer these questions legally, morally and effectively, decision-makers must use a criteria-based process. Criteria-based decision-making increases the probability of correctly identifying and attacking the legitimate target while minimizing collateral damage, thereby enhancing the policy’s effectiveness.

Amos N. Guiora is a Professor of Law at the S.J. Quinney College of Law, the University of Utah. Guiora who teaches Criminal Procedure, International Law, Global Perspectives on Counterterrorism and Religion and Terrorism incorporates innovative scenario-based instruction to address national and international security issues and dilemmas. He is a Member of the American Bar Association’s Law and National Security Advisory Committee; a Research Fellow at the International Institute on Counter-Terrorism, The Interdisciplinary Center, Herzylia, Israel; a Corresponding Member, The Netherlands School of Human Rights Research, University of Utrecht School of Law, was awarded a Senior Specialist Fulbright Fellowship for The Netherlands (2008) and research grant from the Stuart Family Foundation (2011). Professor Guiora has published extensively in the U.S. and Europe on issues related to national security, limits of interrogation, religion and terrorism, the limits of power, multiculturalism and human rights. Guiora is the author of numerous articles, op-eds and books; his recent books include Global Perspectives on Counterterrorism, Fundamentals of Counterterrorism, Constitutional Limits on Coercive Interrogation, Freedom from Religion: Rights and National Security and Homeland Security: What is it and Where are we Going? He served for 19 years in the Israel Defense Forces as Lieutenant Colonel (retired), and held a number of senior command positions, including Commander of the IDF School of Military Law, Legal Advisor to the IDF Home Front Command and Legal Advisor to the Gaza Strip. Professor Guiora received the S.J. Quinney College of Law Faculty Scholarship Award (2011).