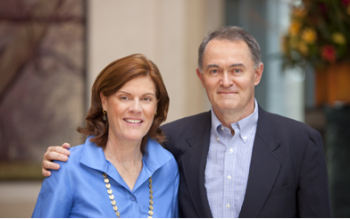 When Nora Jordan and Allen Reiser decided to endow a scholarship at Duke Law, it was a logical choice to name it for Jordan’s father, said Reiser. “He was a great guy with a great story of achievement and ability.”

An Irish immigrant who settled in Cleveland in 1958, the late Thomas Jordan had just an eighth or ninth grade education, said Jordan, head of the Investment Management Group at Davis Polk in New York and a member of the Duke Law Board of Visitors.

“He did manual labor his whole life. He worked for the public utility for 30 years and held second jobs because he had seven children,” she said. “But he was very smart and entirely self-educated. He read all the time when he wasn’t working and he encouraged all of his children to do so. He thought it was important to understand what was going on in the world.

“Once a week, on one of the few nights that he didn’t have a second job, he would take us to the local public library — a 30-minute walk each way because we didn’t have a car — so that we could get books and participate in programs. That’s how my love of reading began. He would give us riddles to do in the evening and help us with our homework. He really inspired us to learn.”

Describing her father as quiet, unassuming, and extremely honest, Jordan said he stressed edu­cation for its own sake, not just as a means to get ahead. But thanks to him, his children did. “The result is that we have three partners at law firms, one doctor who specializes in infectious diseases, one head of economic development in North Royalton, Ohio, one executive at Hewlett-Packard, and a Pulitzer Prize-winning journalist for the Washington Post,” she said with a laugh.

Grateful for her father’s example and inspiration, Jordan said she is also grateful for the scholar­ship assistance she was given to attend Duke as well as the legal education she received. “The teachers were engaged and really spectacular. Sara Beale, Jim Cox — they’re just amazing teach­ers,” she said. “I’ve had a great career, and Duke was part of that. Giving me a scholarship was part of that. And it’s time to give back.”

Reiser, who met Jordan when they both joined Davis Polk immediately after law school, recalls Duke Law’s small-school atmosphere as being nurturing. “It was like being in a family. It still feels that way when I go back,” he said, having returned frequently to interview on campus during a long career with JP Morgan Chase, first as a lawyer and then as a structured-finance banker. “Duke has a very different feel from other schools.”

Now retired from banking, Reiser is engaged with multiple nonprofits including St. Joseph High School in Brooklyn, the Sharon (Conn.) Historical Society, and the Sharon Green Preservation Association; he and Jordan also are involved in the American Skin Association which, among other things, funds research on melanoma. Reiser said that given their fond memories of Duke Law, establishing a scholarship, with a $125,000 gift and $62,500 from the Star Financial Aid Matching Fund, “seemed like a great opportunity to give something back.”