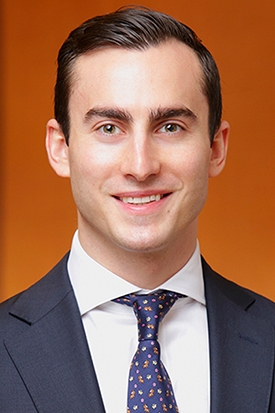 Advising clients on various matters involving digital currency-based businesses is a central part of Kiviat’s practice in Davis Polk’s Investment Management Group. Kiviat has been deeply involved in this space ever since his Duke Law days. In fact, he expounded on these topics in his student note: “Beyond Bitcoin: Issues in Regulating Blockchain Transactions,” 65 Duke Law Journal 569, which informed policymakers and practitioners considering the appropriate regulation of certain digital currency-related activities. With over 20,000 unique downloads to date, Kiviat’s paper foreshadowed the digital currency market boom of 2016-2017 and marked the first widely read and cited academic paper to clearly distinguish digital currencies, like bitcoin, from blockchain technology.

Also engaged in more traditional aspects of counseling private equity, hedge funds, and venture capital funds at his firm, Kiviat says his “nerdy interest” in digital currencies is seen as a “value-add,” even among more traditional clients, who are increasingly taking interest in this growing asset class. His practice of sharing industry developments and “hot takes” with a core group of partners led to his organization of a firm-wide network of attorneys interested in the field that is now about 100 strong. And for nearly one year straight, he found himself giving frequent presentations to clients — major banks and private investment firms — with questions about digital currencies and their impact on business.

Clients are now expressing serious interest, Kiviat says, in such matters as whether the SEC is likely ever to approve a bitcoin-based exchange traded fund (ETF) and the regulatory treatment of so-called “stablecoins,” which are digital currencies designed to remain pegged to the price of more traditional currencies or assets, such as the U.S. dollar.

Building a comprehensive understanding of the financial regulatory landscape and relationships with regulators is crucial in advising clients seeking to engage with digital currency-based businesses. Kiviat appreciates his firm’s refusal to greenlight ICOs when many other firms were “acting like cheerleaders,” calling some of the analysis “questionable at best.” Their decision, he says, has been vindicated by dozens of recent enforcement actions taken by the SEC against issuers of ICOs as being in violation of securities laws.

“A move-fast-and-break-things mentality tends not to work so well in heavily regulated industries,” Kiviat says. “It’s probably a bad idea here to ask for forgiveness instead of permission. You very much need permission.”

Kiviat says his thinking on digital currencies and blockchain technology has evolved since he authored his student note, which was quite bullish, at the time, on the promise of blockchain technology. He notes that bitcoin is arguably still the only true “killer app” to date, and he wonders if blockchain techology is largely a “solution in search of a problem.” In any case, he believe regulators are taking the correct approach as the industry matures.

“Federal regulators are moving at the right pace,” says Kiviat, “and they are generally prioritizing correctly. First, they weed out the clear and obvious frauds; then, they explore the more nuanced and interesting questions affecting legitimate businesses.” And finally, he says, there will need to be “new law in certain areas,” but he doesn’t expect it to come any time soon.