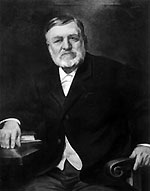 Samuel Fox Mordecai II was Trinity College Law School’s first dean, a position he held from 1904 until his death in 1927. Mordecai was a dedicated professor, a great scholar, and a leader in legal education whose published pamphlets and letters were requested by lawyers and scholars throughout North Carolina. He initiated the reorganization of the Law School, requiring two years of pre-law study for admission to the three-year LLB program.

And he loved his dog.

Mordecai’s beloved daschund, Pompey Ducklegs, was so closely identified with the dean that some thought he loved his pet as much as his students. Mordecai brought the short-legged dog, who was named after a character from James Kirk Paulding’s 1832 book Westward Ho!, to class with him throughout many of his years as dean, during which time Mordecai missed only three lectures.

However, students could take assurance in Mordecai’s description of his dog, which could just as effectively describe the man himself. Mordecai explained that Pompey Ducklegs “cusses, chews tobacco … [and] loves all Trinity College law students.”

Two of Mordecai’s students, William B. Umstead ’21 and R. Gregg Cherry, later served as North Carolina governors, one became his son-in-law, and many others walked away with fond memories of the gruff yet beloved professor.

In a 1985 letter to the Law School, P.H. Crawford ’29 recalled his experiences in Mordecai’s last course, Real Property, in the fall of 1926. Crawford, then 19, attended the course for first-year law students at Mordecai’s home on the northeastern corner of campus where the semester’s first months were spent in chairs on the front porch. Come autumn the group moved inside to the dining room among piles of Mordecai’s law books and papers.

Crawford recalled earning the opportunity to drive Mordecai to Raleigh in the dean’s old Model-T towing car, a mark of distinction among students. A confident student, Crawford also recalled the occasion when “the good and venerable old dean decided it was about time to cut me down to size.”

“After I gave a correct answer to a question he had propounded and several other students had missed, instead of proceeding on into something else with another student, he stayed with me and really shot the questions to me and soon had me confused, baffled, and frustrated,” Crawford wrote. “He then relaxed in his questioning, cast a glance in my direction and, with his usual chuckle, said ‘Just because you are in here with a bunch of jackasses is no reason for you to think you are some kind of stud horse.’”