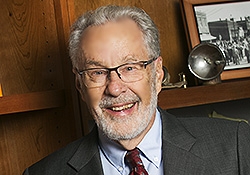 What happens when lawyers make mistakes? While certain professional errors may result in disciplinary action by bar regulators, lawyers’ civil liability to their clients isn’t always clear-cut as Professors Neil Vidmar and Herbert Kritzer observe in a new book.

Vidmar, the Russell M. Robinson II Professor Emeritus of Law, and Kritzer, the Marvin J. Sonosky Chair of Law and Public Policy at the University of Minnesota Law School, report on their comprehensive empirical study of lawyers’ professional liability in When Lawyers Screw Up: Improving Access to Justice for Legal Malpractice Victims (University Press of Kansas, 2018). Their subtitle hints at a key finding: Some clients fail to obtain redress for their attorneys’ mistakes or negligence, even when they have suffered significant harm.

Not all professional errors are actionable and legal malpractice can often be unclear, said Vidmar, who has also extensively studied medical malpractice claims and outcomes: “If a lawyer tells a client, ‘Well, we couldn’t do anything about your problem,’ the client might be disappointed, but perhaps accept it.” Actionable claims — which can arise from negligence, breach of contract, breach of fiduciary obligations, or intentional torts — also face hurdles that often preclude remedies. In some states, for example, the statute of limitations for claims begins to run from the date the error was made, a point at which clients are likely unaware of any problem, and by the time it becomes evident, the statute of limitations has expired. Generally claims arising from errors in criminal representation demand that plaintiffs essentially prove their innocence. And the key question in negligence claims is whether the client would have prevailed if the lawyer had not made the mistake.

Their study exposed major differences in the frequency, types, and results of claims faced by lawyers in the corporate services sector and by lawyers who serve individuals and small businesses, a divide corresponding to what has been called the “two hemispheres of lawyers’ professional responsibility claims.” Lawyers in big firms serving corporate clients face fewer claims, possibly because review procedures are built into their teams’ work flow. But a key difference between the hemispheres, write Vidmar and Kritzer, “is the ability of clients to obtain redress when an error has caused some loss.” 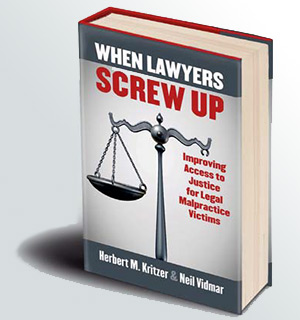 While corporate-sector losses, when proven, tend to be far higher than those that emerge from the personal-services sector, most large law firms carry liability insurance that can be used to pay a judgment or settlement. By contrast, the few claims successfully litigated against solo practitioners and small firms often go unsatisfied due to the defendants’ lack of insurance, Vidmar and Kritzer found. Those claims are seldom even brought, and the few that are often go uncollected. The authors note that as of 2016, only Oregon required all attorneys to have professional liability coverage.

Further, while many lawyers specialize in medical malpractice claims, few attorneys handle more than a handful of legal malpractice matters in their practices and many lack expertise in prosecuting claims. In fact, relatively few lawyers will take a case based on legal error unless liability is clear, damages are high — usually above $100,000 — and (again) the defendant attorney is insured. “Sometimes they turn you away simply because the claim isn’t worth their time,” said Vidmar. He added that attorneys are likely to demand hourly payment for legal malpractice claims in the corporate sector; most claims in the personal services sector are based upon contingency fees, although in some instances they may convert to contingency fees after an hourly cap is reached.

Plaintiffs who file legal malpractice cases almost inevitably face motions for summary judgment, Vidmar and Kritzer report. Plaintiffs win about half of the cases that do reach trial, an unusually high percentage of which are bench trials. Their success at trial is fairly typical of torts other than medical malpractice.

The authors end their book with a series of proposals designed to mitigate the access-to-justice problem. Among these: requiring lawyers to disclose to clients whether or not they carry insurance and any lapses in coverage; strongly incentivizing insurance coverage by automatically suspending the license of a lawyer who fails to pay a malpractice settlement or judgment; implementing a form of alternative dispute resolution system for claims rooted in lawyers’ professional liability; requiring lawyers found liable or who settle malpractice claims to pay the plaintiffs’ reasonable legal fees; and both lengthening statutes of limitation periods for legal malpractice claims and having the “clock” start running from either the date damages accrue or when the plaintiff became aware or reasonably should have known of the error.