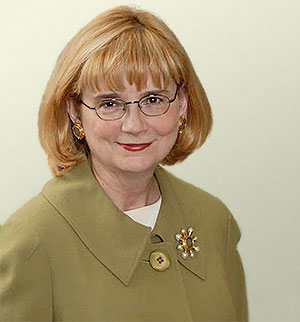 Like many Duke Law graduates, Lea Courington ’77 is a devoted fan of the men’s basketball team. But on April 6, when the Blue Devils were battling Wisconsin for the NCAA championship, she couldn’t watch.

“Over the years I developed the theory that I’m a jinx when watching any team that I’m favoring,” said Courington, a member at Stewart Courington Dugger Dean in Dallas. “So my contribution to the Blue Devils, whom I deeply love, is that I never watch them play.”

In every other respect, Courington engages directly with her alma mater. A member of the Law Alumni Association (LAA) Board of Directors since 2012, she has also served as a class agent and on her class reunion committee. She co-chairs the Duke North Texas Women’s Forum and is a member of the North Texas Regional Board. And she is a regular participant in the Business Law society’s annual ESQ symposium.

Having started as an antitrust and trial litigator in private practice, Courington gained significant trial experience as a Dallas-based antitrust prosecutor for the U.S. Department of Justice, where she learned how the government builds cases and grand juries operate. That served her well when she moved back into private practice, where she has handled a wide range of cases, finding — somewhat to her surprise — an affinity for cases involving scientific, medical, and technical subject matter. She now focuses on health care law, including white-collar health care fraud cases, at her boutique firm, which serves many clients in highly regulated industries.

“I have a chance to help clients who want to comply with the law,” she said. “I have often found that health care white-collar cases begin not with any fraudulent intent, but with a failure of compliance.

“Practice is so much different now than it was when I left Duke in 1977,” she said, noting, for example, how few cases go to trial compared to the number earlier in her career. “But I believe the intellectual training I got at Duke and the confidence that that kind of training gives you makes you willing and able to adapt.”

"I know a lot of lawyers, but I don’t know many who truly love their law school the way the other alums I know love Duke."

In recent years, Courington has forged a special relationship with Sara Sun Beale, the Charles L.B. Lowndes Professor of Law, whose work she directly supports with her annual contributions to the Law school. She cites the quality of Beale’s scholarship in white-collar defense and the esteem in which she is held by academics and practitioners alike, as well as her skills as a teacher and mentor.

“Sara is an eminent and distinguished scholar and a dear personal friend. I think that Duke is so lucky to have her,” she said. “I’ve seen her in class. She has an ability to take a complex topic and highlight the serious points in a clear way that does not lose any of the nuance.  You have to do the same thing as a trial lawyer, and I think Sara does it really well. She also takes such a keen interest in her students and connects with them so well. I think she’s a very exciting professor.”

Beale says she is grateful for Courington’s financial support, which she uses for research assistance and academically related travel for herself and guest speakers in her class. But she is also grateful for the many other ways Courington sup- ports the Law school. “She has been a guest lecturer in my class, and she has introduced me to her impressive network,” said Beale. “She is also a tremendous asset to current students, doing mock interviews, giving career advice, and helping them network. I have seen her mentor younger alumni and help both junior and senior alumni to connect them to the Law school.”

A native of southern Arizona, Courington said Duke was not particularly on her radar as a top choice for law school until Paul Hardin III ’54 (then the president  of Southern Methodist University, where she was a student  leader) said she “‘would be making a big mistake’” by bypassing Duke. Her visit proved him right.

“I literally lost my heart to Duke after two or three minutes on campus,” she said. “I often think that I should write Paul Hardin a letter and tell him how much our conversation changed my life!”

Courington’s service on the LAA board has kept her coming back and connected with classmates and has introduced her to the broader alumni community.

“I know a lot of lawyers, but I don’t know many who truly love their law school the way the other alums I know love Duke,” she says. “I attribute that to something so extraordinary and special about Duke — both to the school and to the kind of person it attracts, and to the way we’re all bonded together over a lifetime.”