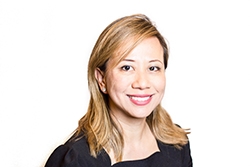 The key to a successful career is seeking information, perspective and input from industry experts, colleagues, friends and family — and making sure you pay back the favor. That’s a crucial insight Lin Chua has gleaned from a career as a transactional lawyer, international banker and “fintech” entrepreneur.

“Everybody offers something to you, and you can offer something to that next person,” said Chua, the co-founder, chief operating officer and head of capital markets of InterNex Capital, an asset-based digital lending company that provides revolving lines of credit to the lower mid-market. “Build that community of support and help people back because that’s the network that will be helping you.”

A native of Singapore, Chua has practiced what she preaches from the time she arrived at Duke Law from Australia, where she was a transactional attorney at Freehills (now Herbert Smith Freehills). Choosing Duke as her gateway to her goal of landing a job at a New York law firm was a “no brainer,” she said, as she was “very much taken by the people who had reached out to me and by the conversations I had before I came in.”

Chua, a member of the Law School’s Board of Visitors, speaks five languages, has lived on four continents, and has worked — often managing cross-border deals and teams — in three countries. As she advised students to do at her keynote address for the 2016 ESQ Career Symposium, Chua quickly built her Duke network. While still at Duke, she found mentors in Professors James Cox and Steven Schwarcz, with whom she remains in contact. She kept her door open to LLMs who were visiting and interviewing in New York while she practiced at Simpson Thacher & Bartlett. And she remained in touch with administrators of the LLM program during a three-year stint at the De Brauw Blackstone Westbroek law firm in Amsterdam.

Chua ramped up her alumni engagement after moving back to New York to take a position at GE Capital, mining her broad network of professional relationships to help Duke JD and LLM candidates find diverse career opportunities in practice and industry. Along with Judy Horowitz, then the associate dean for International Studies, she established the International Advisory Board. The idea was to create a thriving LLM alumni community and support the LLM program with strategic advice in international efforts. The first step: cementing connections among the many LLM graduates who had established careers in the New York region.

“That was our launch pad for creating community and I think we’ve been very successful in the first generation of that ‘build,’” Chua said. “The next phase will involve taking the International Advisory Board into a more online and international level, where people still feel that sense of connection to the Duke Law network, despite the fact they are in far-flung locations.”

Chua has been instrumental in building support and sponsorship for the annual International Alumni and Student Dinner in New York, held in conjunction with the Law School’s International Student Interview Program. The event, of which Chua and her husband, Evert Vink, regularly serve as gold-level sponsors, celebrated its eighth year in January.

“The dinner is an anchor event for the International Advisory Board and we see it as a unique opportunity to try to lead in demonstrating to the international community the importance of giving back and contributing back to the Law School,” she said.

Now in her first term on the Board of Visitors, Chua previously served on the Law Alumni Association (LAA) board and received its Young Alumni Award in 2015. Chua said her board service “ties back to individuals at the Law School who have helped me through their generosity, through their introductions, and through their networks, both when I was at Duke and after. Over time, it became about the joy of being able to help others in that same process.” She calls the network and the relationships she has built through her volunteer service “phenomenal” and highly enriching, both personally and professionally.

Students and young professionals should regularly ask themselves what they are learning from each position they occupy, Chua said in her 2016 ESQ keynote address, adding it’s crucial to use metrics to define goals.

“If you can’t measure something you can’t manage it,” she said, suggesting that transactional lawyers assess their skill-development over five deals by asking each client or co-counsel to score their representation on a scale of one to 10. “Give it a number so you can align your goals with what you are trying to achieve and drive yourself towards it.”

She also counseled students to embrace the unknown, be prepared to take risks and ward off any complacency. “Face into uncertainty and embrace it,” she said. “There is a scale between anxiety and boredom. Stay slightly tilted towards anxiety.”

Her experience since the launch of InterNex Capital in the fall of 2015 “has never crossed the center line towards boredom, “ Chua quipped in an interview a year later. “Every single moment has been tilted towards anxiety.”

She co-founded the company with fellow former GE Capital senior executives, following another piece of advice she shared with students: Define your own path.

“When I decided to leave GE Capital, I was fortunate to have several options, and one was a significant promotion to another major financial institution,” she said. “I was talking to a long-time friend about the pros and cons of my options and he said: ‘You’ve been thorough and methodical in your analysis of each choice. But what I haven’t heard is what do you, deep-down, want to do yourself?’”

Chua decided that she wanted to follow a family tradition of entrepreneurship. Her father founded a sovereign wealth fund; her brother established an ophthalmology practice; and her mother ran her own insurance business at a time when it was still unusual for women to work in Singapore. “She was very much on the front line in encouraging me to do my own thing, to trust my instincts, to be loyal and build long-term relationships, but also to be very independent,” Chua said.

Chua called 2015 through 2016 “the build period” for InterNex Capital, as she and her co-founders created the infrastructure and technology to offer asset-based revolving lines of credit without the paperwork, bureaucracy, or reporting that can overwhelm small and medium-sized business borrowers, perfected the algorithm they use to underwrite, manage, and monitor their portfolio, and secured strategic partnerships and significant investments. “At the end of 2016, we truly ‘cut the ribbon’ and opened the doors for business,” she said.

Her decision to become an entrepreneur has proven deeply satisfying. She helped InterNex Capital to structure its business, financing and investor capital, learning along the way.

“The fulfillment I get from being challenged, from learning, and from constantly having to think faster, make connections, and make decisions and plan solutions quickly has been tremendous,” she said.

At ESQ, Chua challenged attendees to look at themselves in a similar way: “What do you truly want to do? You have to love your job. You spend too many hours of your life doing it not to be passionate about it.”