James '96 serves as a mentor, recruiter, and friend to many Duke Law students and alumni 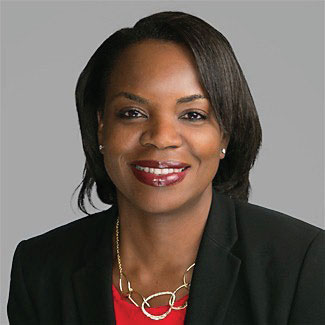 Offering career advice to a classroom full of Duke Law students on a late January afternoon, Sylvia James stressed one point in particular: Relationships matter. “Everything is about relationships,” she told more than two dozen members of the Black Law Students Association (BLSA ), which hosted the lunchtime event with James, diversity counsel for Baker Botts, and her counterpart at Proskauer Rose. She placed being “visible” on the job, even for summer associates, almost on par with diligence in completing assignments and billing hours. “Get out of your office, introduce yourselves to colleagues, volunteer for projects, and join the office softball game,” she said. “That’s how you get work and that’s how you find mentors.” Relationships become particularly important during performance reviews, she added. “You need allies in the room who will fight for you.”

James has been that sort of ally to Duke Law students ever since her own graduation — as a recruiter, mentor, and friend to many. A member of the Law Alumni Association (LAA ) board, she has also spearheaded her firm’s support for a range of student programming and Career Center initiatives.

Sylvia has been a wonderful mentor to so many of our students in many ways. She is always available to offer students perspective and advice on how to succeed in their summer jobs, whether or not they are working at her firm.”

James regularly conducted on-campus interviews at Duke during 10 years as a labor and employment lawyer and member of the hiring committees first at Akin Gump — where she and several classmates were recruited by Duke Law alumni — and then at Holland & Knight. Since joining Baker Botts in 2006, she has forged a partnership between her firm and the Women Law Students Association (WLSA ) that helps prepare first-year students for the summer job market. And each fall she leads a contingent of colleagues to conduct in-depth mock interviews and resume reviews with any students who sign up, which often means almost half the 1L class.

James stays in contact with many of the students she interviews, offering them guidance and support as they settle into their careers, often laying the groundwork for long-term relationships. Last year alone, she received three wedding invitations from Duke Law alumni she first met as 1L interviewees.

“I like seeing them get their initial jobs and then continuing to thrive in their careers, wherever they land,” she says in a telephone interview. “Nothing makes my day more than an email that starts, ‘Hey, Sylvia, I just wanted to let you know how things are going.’” “Sylvia has been a wonderful mentor to so many of our students in many ways,” says Bruce Elvin ’93, associate dean for career and professional development. “She is always available to offer students perspective and advice on how to succeed in their summer jobs, whether or not they are working at her firm. And her deep commitment to enhancing diversity and inclusion at her firm and in the profession is remarkable.”

James’ role at her firm is to help recruit, retain, and develop women and “minority-diverse” lawyers: members of racial and ethnic minority groups, LGBT and disabled individuals, and veterans. In addition to mentoring associates in these groups and tracking their progress, James advances a culture of acceptance and inclusion at Baker Botts so that, she says, all lawyers enter “a welcoming environment where they can come in with their whole selves and be able to advance and build good careers.” She trains attorneys and staff about the unconscious biases that everyone holds around such issues as race and gender, which often dissipate through simple self-awareness.

“We have found that training to be very effective,” James says. “We see that we all hold biases and nobody is being ostracized or demonized. It sparks real conversations and efforts to minimize bias.” One check the firm has put in place to negate bias in reviewing summer associates’ work is a form of blind evaluation of similar writing samples.

“If we have a student who has gotten a poor review, we take the names and identifying information off the written work and have that work product evaluated a second time by an uninvolved, very fair grader, along with other student work deemed to be good,” she says. “Sometimes that confirms the first assessment, but sometimes it doesn’t. For a summer student, a good review or a poor review on a written assignment can make the difference between getting a job offer or not, so if the second review can remove potential biases and create opportunities, it’s worth it.”

All Baker Botts lawyers involved in recruiting for the firm go through unconscious bias training as part of their annual preparation for conducting on-campus interviews at Duke or elsewhere, James says.

A self-described “diversity nerd,” James has held a number of leadership posts in the Association of Law Firm Diversity Professionals, an association of peers at more than 100 law firms who share information and best practices, and is on the advisory board of the Institute for Inclusion in the Legal Profession. She also is a member of the newly formed Diversity and Inclusion 360 Commission of the American Bar Association.

“My work and my firm’s diversity initiatives are not just to help Baker Botts, but to enhance diversity in the legal profession overall,” she says. “Of course we hope to increase our yield of diverse attorneys at the firm, but we all benefit from greater diversity in the talent pipeline.” She is frustrated to see the collective progress of African American lawyers stagnate to some extent in recent years. “The recession did a lot of damage,” she says. “African Americans were laid off in large numbers at law firms across the country and haven’t really been able to recover, particularly since summer class sizes have remained somewhat small. With less opportunity, too often people are only hiring students with whom they have a particular affinity.” Through her professional affiliations she supports pre-law initiatives that help prepare minority students for success in law school and, thus, for recruiting success, as well as broader initiatives to combat bias against them. James, who served as a 20th reunion co-chair for her class, is unapologetic about her own “affinity-group bias” towards members of the Duke Law community.

“I had a great experience at Duke,” says James, a Long Island native who had never been to the South before she visited Duke Law on a warm March weekend during her “brutally cold” senior year at Vassar. “I liked the class sizes, I liked my professors, I liked my classmates and I made a lot of lifelong friends. I liked the fact that Duke was collaborative. Duke had the philosophy that we can all make it — that we didn’t have to stab each other in the back.” Even though she was the first student called on in three consecutive classes on her first day of law school, James enjoyed getting to know her professors, particularly appreciating the outreach of the late Professor Jerome Culp to African American students. “He was much more than a professor to us,” she says. “He welcomed us into his home. He was a very important part of my law school experience.”

Duke opened doors for James that she quickly resolved to help open for others, which is why she enjoys partnering with Elvin and his staff on professional development activities like the 1L mock interview initiative and the January meeting with BLSA students, one event in a Career Center series on navigating a life in law as a diverse attorney. She credits those connections with motivating her broader engagement with the alumni community and the school through her LAA service and her firm’s support for such programming as a recent conference on the future of civil rights. She is quick to say that her firm benefits from the relationship.

“We want to recruit students from top schools, like Duke, so name recognition on campus helps develop student interest in applying to the firm,” she says. “Last year we had 11 Duke Law students in our summer associate class, and that’s terrific. But we also want to get behind anything that helps students, including minority students, be better prepared to go into firms for the summer and for their careers after they graduate.”

One more personal benefit James derived, indirectly, from her relationship with Duke: While in Durham to hold mock interviews for 1Ls in the fall of 2012, she met her future husband in her hotel lobby. They were married last Thanksgiving. “From day one he knew how much I love Duke,” James says.