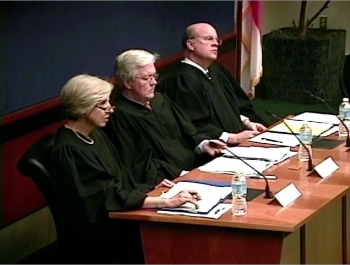 A three-judge panel named Kathleen Wade ’15 the winner of the 2013 Hardt Cup at the conclusion of that tournament’s final round on Monday.

“In terms of demeanor, presence of mind, response to the questions, you really both did excellent jobs,” said Judge Kimberly Mueller of the U.S. District Court for the Eastern District of California. “I would welcome either of you in my courtroom.”

Wade and co-finalist Zharna Shah ’15 argued Bond v. United States, a case involving an attempted poisoning resulting in federal chemical weapons charges before Mueller, Judge John Tinder of the U.S. Court of Appeals for the Seventh Circuit, and Judge Robert Conrad of the U.S. District Court for the Western District of North Carolina.

The judges all praised both finalists’ mastery of the record in a complicated case.  “Your presentations were much like the best that we see in our day-to-day work,” Tinder said.

The Hardt Cup is Duke Law’s annual moot court tournament for first-year students, giving them an opportunity to practice oral advocacy and a chance to earn an invitation to join the Moot Court Board.  The competition was founded in 1964 by classmates of A. Lee Hardt, who died unexpectedly just after the completion of his first year.

Arguments in the final round of the 2013 Hardt Cup centered on a case involving a woman who attempted to poison her husband’s lover with a combination of chemicals taken from her workplace and ordered over the internet. She was caught and charged with two counts of possessing and using a chemical weapon under the 1998 Chemical Weapons Convention Implementation Act, an act passed by Congress to make the tenets of the Chemical Weapons Convention, a multi-state treaty, into U.S. law. She challenged the charges, claiming that the statute federalizes criminal acts that fall under the purview of state governments.

Shah represented the petitioner, the accused poisoner, arguing that the court should find the Chemical Weapons Convention Implementation Act “unconstitutional as applied to Ms. Bond’s case.”

“This case is about preventing Congress from using the treaty power as a back door to enact legislation that circumvents the fundamental principles of federalism enshrined in our Constitution,” Shah said.

Wade, representing the United States, argued that Bond’s use of dangerous chemicals — particularly her application of the chemicals to her intended victim’s doorknobs and car door handles — amounted to the kind of chemical use that the treaty was designed to prevent.

“This case is about the ability of the United States government to protect us all from the threat of chemical weapons proliferation, a national security issue of the highest concern in the global fight against terrorism,” she said.

“The students did a terrific job yesterday.  Kathleen and Zharna answered some very difficult questions thoughtfully and with great poise,” said Dean David F. Levi.  “Our distinguished panel of federal judges were also impressed by our competitors.  And I particularly wish to thank Judges Mueller, Tinder, and Conrad for being so well prepared, asking such great questions, and making this a memorable Hardt Cup final.”

The Hardt Cup competition is comprised of three preliminary rounds, a quarterfinal round, a semifinal round, and a final round.  Participation in the first round of the Hardt Cup is a mandatory component of the Legal Analysis, Research, and Writing (LARW) curriculum for all 1L students.  Participation in subsequent rounds, through which students can earn an invitation to join the Moot Court Board, is voluntary but strongly encouraged.  At the end of the third round, the students with the highest scores will be invited to join the Moot Court Board.  The top eight advocates will continue to argue in the final rounds to compete for the Hardt Cup trophy. 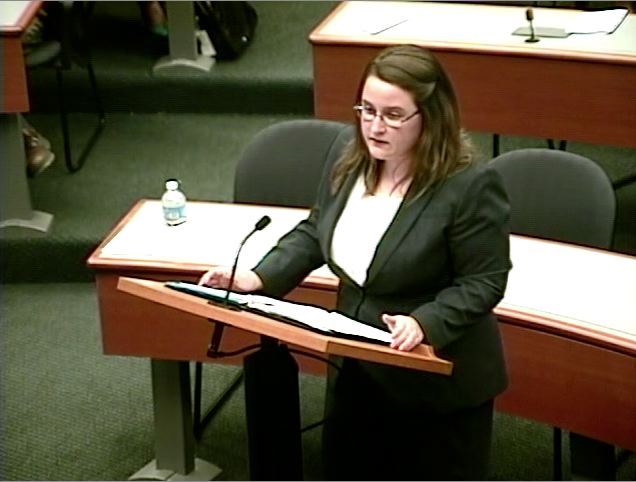