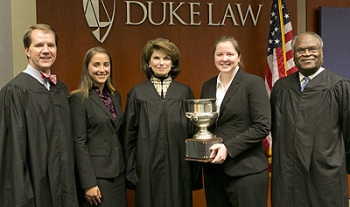 Alison Ward ’16 prevailed in oral arguments in the final round of the intramural Hardt Cup Competition on April 9. She argued on behalf of the petitioner in a Supreme Court case concerning the First Amendment protections accorded to a public employee’s subpoenaed testimony in a criminal trial. Chantalle Carles ’16 argued on behalf of the respondent in the final round.

Judge Reena Raggi of the U.S. Court of Appeals for the Second Circuit served as chief justice for the final round.  She was joined on the panel by Judge Curtis Collier ’74 of the U.S. District Court for the Eastern District of Tennessee, and Justice Don Willett JD/MA ’92 of the Texas Supreme Court. All of the jurists praised the quality of the finalists’ advocacy.

“I thought it was just a superb argument,” said Raggi. “In terms of your poise and demeanor and responsiveness to questions, I would think it was tie.”

“I once heard a former solicitor general of the United States say that oral argument should be not a high school debate or a speech delivered to the court, it should be a conversation with the court,” she said. “Both of you understand that lesson already. You were just so pitch perfect in your demeanor in dealing with the court.”

“Either of you could step up to the podium in my court and dazzle us from day one,” said Willett. “I thought you were both incredibly poised and very comfortable on your feet.

Collier agreed, praising the way Ward and Carles handled frequent questions from the bench. “The questions were designed to point out the weaknesses in your case, and neither one of you ever got sidetracked,” he said.  “I was very impressed that you were able to keep your poise and maintain eye contact, and directly answer the questions. You inspired confidence.”

In agreement that Carles had what Collier called “the more difficult argument,” they also took special notice of Ward’s rebuttal, during which she directly addressed a hypothetical the judges had posed to Carles.

“Good job picking up on things that seemed to matter to the court and circling back to that and trying to leverage it and sort of wield it to your client’s advantage,” said Willett.

“To have listened carefully enough to take an example that was used in your adversary’s argument and then play it to your advantage is really a very nice and sophisticated thing for an advocate to do,” said Raggi.

The Hardt Cup problem was based on Lane v. Franks, a case currently pending before the Supreme Court on the matter of the First Amendment protections accorded to public employees’ subpoenaed testimony. A public employee must speak as a citizen on a matter of public concern in order for the speech to be entitled to First Amendment protection, and in 2006, the Supreme Court held that a government employee does not speak as a citizen if the speech is made pursuant to the employee’s official duties.

In the case at hand, a public employee had given subpoenaed testimony before a grand jury and at two criminal trials regarding the termination of another public servant’s employment. The witness was fired from his position following the first trial, and claimed that his First Amendment right to free speech was violated by an illegal terminated in retaliation for his subpoenaed testimony. He claimed he was entitled to damages as a result. The District Court held that his testimony was not protected because it owed its existence to his public employment and thus was made pursuant to his official duties, not as a citizen. The Eleventh Circuit summarily affirmed.

Ward and Carles argued two matters before the judges in the final round.  First, they asked the court to resolve a circuit split as to whether subpoenaed testimony is categorically made by citizens, and thus is always protected. The petitioner urged the court to adopt such a rule, and the respondent argued the opposite. Second, they asked the court to decide, as a matter of law, whether the appellant’s speech was made pursuant to his official duties or as a citizen. The respondent contended that the district court and the Eleventh Circuit disposed of this issue appropriately, while the petitioner argued that the source of the speech’s content was not dispositive, and that he must have been speaking as a citizen because testifying at criminal trials was not a part of his job.

The Hardt Cup Competition was launched by students in the Class of 1964, in memory of their classmate, A. Lee Hardt, who died after completing his first year at Duke Law. The annual four-round competition for 1Ls is organized by the Moot Court Board and held in the weeks following spring break, with participation in the first round a mandatory component of the 1L Legal Analysis, Research and Writing curriculum. Participation in subsequent rounds, through which students can earn an invitation to join the Moot Court Board, is voluntary. This year, 207 students participated in the first round, 107 elected to continue to the second round, and 22 received invitations to join the Moot Court Board.

In each of the three preliminary rounds, students argued twice in front of members of the board. Panels of faculty judges scored the quarterfinal round and the semifinal round was judged by local practitioners.