Duke Law welcomed more than 325 new JD, LLM, LLMLE, SJD, and exchange students from 43 countries for the launch of the 2012-13 academic year. In addition to participating in their first law school courses and discussions about ethics and leadership in the legal profession, students heard from students, faculty and an exonerated client of the Wrongful Convictions Clinic; participated in Dedicated to Durham, which involved community service projects throughout Durham; and enjoyed some North Carolina barbecue.

The International LLM Class of 2013 includes 92 students from 37 countries, including, for the first time, students from Sri Lanka, Guatemala, Qatar and Jordan. The majority of the students have professional experience in legal settings; many have worked as in-house counsel, judges, prosecutors, government ministers, academics, or public servants. See the class profile to learn more.

The LLM in Law and Entrepreneurship Program welcomed 15 new students. They represent 14 law schools, and many have years of experience in legal practice. They got a quick introduction to the entrepreneurial life during orientation activities, which included an entrepreneurship ‘boot camp’ that required them to work in teams to create and pitch a company to classmates and faculty. Read more about the program in the LLMLE blog, written this year by Josh Lawson ’13.

Four new SJD students launched their studies in banking, entrepreneurship, environmental law and social science evidence. Two are from Saudi Arabia, one is from Spain, and one is from Taiwan. They bring the total number of students in the Duke Law SJD program to 19.

The JD Class of 2015 welcomed 208 students during orientation activities in mid-August. For the more than 30 members of the class who arrived in May as summer starters, orientation was more of a refresher: Summer starters are participants in a dual-degree program, either Duke Law’s JD/LLM or a JD/MA or JD/MS program, and had already taken two substantive law classes by the time orientation arrived.

The entering JD class is diverse: Its members represent 100 undergraduate institutions, 42 states and eight foreign countries, including India, China, South Korea, the Netherlands, Singapore, and Canada. They range in age from 21 to 37; 31 percent are minority students. The largest cohorts are from New York and California, represented by 25 and 24 students, respectively.

The class is also diverse in terms of experiences and accomplishments. In his welcoming remarks to students during orientation week, Bill Hoye, dean of admissions and student affairs, shared an inventory of facts about the class: 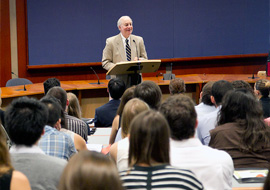