More than 300 Duke Law students returned early from their holiday breaks to attend Duke Law School’s second annual Wintersession, immersing themselves in classes on such practical matters as taking depositions, drafting contracts, basic accounting, and the essential duties of corporate counsel. Their instructors during the free four-day program were Duke Law faculty and top practitioners from around the country.

Marilyn Forbes, a partner at Womble Carlyle Sandridge & Rice in Raleigh, taught Deposition Practice. Also a senior lecturing fellow at Duke Law, Forbes said associates who begin their practice with a working knowledge of how to conduct a deposition have an advantage.

“It’s a critical skill for law students to have,” Forbes said. “Jury trials, especially on the civil side, are really disappearing. I think most litigators, in the course of their careers, will take hundreds of depositions and only have ten to 15 big trials.

“I have found that, as a partner working with teams of associates, the associates who can quickly adapt to taking depositions and do a good job thinking on their feet in the moment — not in the quiet of a library — those associates really can succeed quickly.”

Wintersession students had the option of taking two classes for up to one full credit.

LLM candidate Einat Levy ’12 relished the opportunity to interface with practitioners like Forbes. “It’s a chance to have almost a private session with a partner that would be hard to get at a law firm,” said Levy, an Israeli lawyer.  She also found her class titled Doing Business in China directly relevant to practice.

Wintersession “is one of the most important things Duke Law School does for students in preparing them for the actual practice of law. We bring in some of the best people from around the country, real practicing lawyers with real expertise in the areas that students have been learning about in class, and we help them get the skills they need to put that substantive information to work.”


“You realize how different negotiations are with respect to the different cultures and how important it is to know the cultural differences,” Levy said. “Coming from a different country, I know that that could be an issue. Being prepared before you go into a negotiation with someone from abroad is important.”

“I think it’s really useful as a short, condensed, crash course with some practical, transactional experience,” he said.  “There are great professors who are actually practicing who can tell you about real world experiences.”

Martin Morgado ’12, also an LLMLE student, had a specific goal in signing up Basics of Accounting with Professor James Cox. “I wanted to get an understanding of financial statements and become more comfortable in my ability to review those and be able to communicate my conclusions to colleagues,” he said.

“Increasingly, the U.S. is collecting biometric data — fingerprints, DNA, iris retinal scans, etc.—as a part of our domestic security policy, as well as part of our ‘war on terror’ in military operations abroad,” said Hu, who previously worked at the Department of Justice. “The students enthusiastically embraced the case study approach to this unfolding phenomenon.  Specifically, the students put themselves in the position of policymakers who were tasked with examining what policy prescriptions might be useful to preempt the potential misuse and abuse of biometric databases.”

“It was great to have an opportunity to directly apply law school to a current issue of some significance in Professor Hu's class and it really made me think critically about something you read in the news, but don't normally study,” said Phil Aubart ’13 who also took a Deposition Practice class. “I was also thrilled with the deposition class and the opportunity to learn real litigation skills and spend six hours practicing them under the guidance of an experienced practitioner.”

Wintersession “is one of the most important things Duke Law School does for students in preparing them for the actual practice of law,” said Professor Donald Beskind ’77, who spent more than 30 years in private practice before joining the Duke Law faculty full time in 2010.

“We bring in some of the best people from around the country, real practicing lawyers with real expertise in the areas that students have been learning about in class, and we help them get the skills they need to put that substantive information to work.”

Along with four colleagues from the fields of neuroscience, psychology, and jury consulting ─ including Duke neurobiologist and 2L Pate Skene and Artemis Malekpour ’04 ─ Beskind taught a class titled Neuroscience, Juries and Decision-Making geared to students bound for trial practice.

“The notion we had was to take neuroscience and see how it applies to jury decision-making, and to give students some exposure to the science at the same time helping them put that science in the context of a trial,” he said. “On the first day of the program, some of the best neuroscientists in the country gave them information about the relevant neuroscience principles. On the second day we had them put that information to work in a combination opening statement/closing argument in a simulated trial.”

Karen Riewe ’12 said she found Beskind’s class both challenging and insightful, and perceived Wintersession, overall, as “a good way to get a lot of information in a short time that is highly applicable to practice.  These sessions will help us in the real world.” 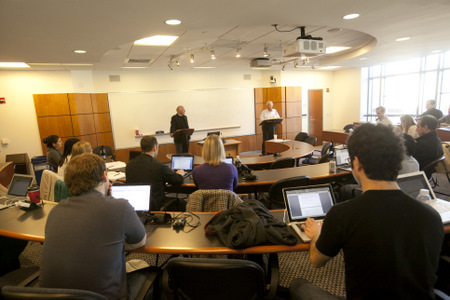