A double-Duke alumna, Rufty felt welcomed at Duke Law and found a “home” in the library where she and husband Archie later endowed a distinguished professorship. 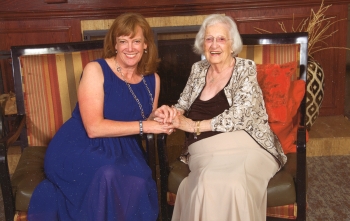 “One day I went to school and it was filled with boys and the next day I was the only one there,” said Rufty, recalling the effect of America’s entry into World War II early in her first year. “So I had the class — legal research — in the professor’s office for the semester.”

Rufty, 95, never set out to become a double-Duke alumna, she explained during an animated interview at her Las Vegas home. She had her heart set on attending the College of William & Mary at age 15 after finishing 11th grade — the highest grade in her Spencer, N.C. school — but wasn’t able to secure one of its slots for out-of-state students. She was late in applying to the Women’s College at the University of North Carolina, Greensboro, but was assured that slots would open up when crop failures forced students from farming families to withdraw. “Well, that year every crop in the world was great and nobody, but nobody got accepted,” she said with a laugh. “I was turned down there and had no place to go!”

Rufty’s father, while not a churchgoer, was on a first-name basis with all the local clergy, and he took her to see the Methodist minister whose brother, he said, worked at Duke. In fact, the brother oversaw admissions.

“The next thing I knew, I was accepted at Duke University’s Women’s College and I had not even applied,” she said. Her delight was tempered only by the challenge posed by Duke’s cost, which her father met by selling his car: “My daddy walked to work every day. It was difficult, but I got to Duke and went to Duke just like I belonged there. I had more guts than sense, I think.”

After graduating, Rufty decided to stay on at Duke for law school. It was, she said, “the craziest thing I ever did,” motivated simply by her complete disinterest in teaching, nursing, or secretarial work, positions then occupied almost exclusively by women. And from the start, she said she felt both welcomed and nurtured at Duke Law.

“Everyone was so nice — they helped me every which way,” she said, recalling Dean H. Claude Horack with particular affection. “Dean Horack was wonderful, so sweet to me. I could go in and talk to him anytime I wanted to, and I did.”

With a precipitous drop in enrollment during the war years — Rufty was joined by a handful of men classified as unacceptable for military service — Duke and Wake Forest University joined forces to keep their law schools open, with Wake students traveling to Duke for classes taught by professors from both institutions.

”The professors were just marvelous — we had the cream of the crop,” Rufty said. Constitutional Law was a favorite course and her professors treated her with the same support and respect they extended to the male students.

But keeping up with tuition and board remained a challenge and Rufty needed a job. She found one in the library, helping the two women in the law library, accessing the stacks by crossing a lawn and jumping through the window into the basement of the law school, then in the center of Duke’s west campus. The library became her “home place” and she grew close with the librarians, who took her on her first and only visit to New York City when they went to a professional conference, making the trip by car at a steady 45-mile-per-hour pace.

Decades later, Rufty and her husband, Archie, endowed a distinguished research professorship for the head of what is now the J. Michael Goodson Law Library. Initially held by the late Richard Danner, for whom the couple had great affection, it is now held by Femi Cadmus, who also is associate dean of information services and technology.

Although she loved her time in law school, Rufty was frustrated in her early attempts to begin her career following her graduation. “I had no realization that it would be so hard,” she said, noting her lack of familial connections to the profession. On a trip to Washington, D.C., with her parents, she walked the streets tracking down leads. One lawyer she approached pointed out to her that his firm’s receptionist was a woman with a law degree; he further insulted Rufty by telling her to hide the fact that one of her grandfathers was an American Indian. “I said ‘thank you’ and got up and got out of there,” she said. “But I had no place in the world to go and no hint of a job.”

Chatting about her predicament with a fellow patron at a drugstore lunch counter where she had stopped for a drink, Rufty got a solid lead: “He told me to go to a firm called Pike, Fischer and Willis. He said, ‘They’re really nice people and they will help you.’ I’ll never forget it.” Rufty landed a job reading and summarizing administrative opinions relating to the conduct of the war and its aftermath for digests the firm produced, which she did for a year. “And then I said, ‘I’ve had it. I’ve read all the opinions I can.’”

Rufty returned to Durham and worked as a research librarian at Duke Law until she found a job with the firm of Edwards and Sanders, led by two lawyers who were “progressive” in their attitudes towards women. “They were wonderful people and I learned a lot,” she said. But her duties were limited to checking titles and her salary was low, so Rufty went home to Spencer, taking a job with the nearby Salisbury newspaper until she was offered a position with an attorney for the U.S. government. The catch: She had to be expert in shorthand, a secretarial skill she had long avoided. She sought after-hours tutoring from the head of a local secretarial school and mastered it in two weeks. “I’ve loved shorthand ever since,” she admits now.

It was at that job that she met Archibald Rufty, a widower with two young sons, who had a law practice on the same floor. They married in 1955 and started practicing law together, over time also expanding their family with a third son and a daughter. In 1958, Archie Rufty, who was active in Democratic politics and served three terms as Rowan County solicitor and two as a judge of the county court, encouraged his wife to run for the position of clerk of the Rowan County Superior Court. “I thought he was crazy, but I thought everything he said was gospel,” Rufty said. “And he knew everybody.” She won, becoming the first woman in the post. “We traveled all over the county, day and night, and I met a lot of wonderful people,” she said, noting her gratitude for the “wonderful” housekeeper who helped care for her young family at that time and long after. Newspaper coverage of Rufty’s political career includes her encouragement for other women to get involved in politics and for all to vote.

After serving two terms as clerk, Rufty left politics to resume practicing law with her husband. They continued to handle wills and other matters for friends from their home even after they closed their firm in the late 1908s (she is licensed to practice in Washington, D.C. and North Carolina). The couple moved to Las Vegas in 1989; otherwise nobody in Salisbury would have permitted Archie to retire, she joked.

Informed that women comprise 59% of students in Duke Law’s Class of 2022 and that in the current academic year, women are serving as editors-in-chief of the flagship journals at the top 16 law schools in the country, Rufty was pleased.

“Things have really changed,” she said. Her road to professional satisfaction, and even acceptance, was rocky, but it was a great experience. “I wouldn’t have swapped it.”