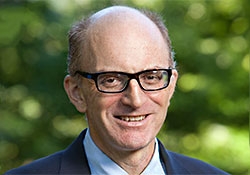 Matthew Adler, the Richard A. Horvitz Professor of Law and Professor of Economics, Philosophy and Public Policy, has co-edited the new Oxford Handbook of Well-Being and Public Policy.  This volume, which Adler co-edited with Marc Fleurbaey of Princeton University, represents a definitive guide to research on individual well-being and on the existing and emerging tools for evaluating public policy in light of well-being.  Handbook chapters written by internationally renowned economists and philosophers explore different methodologies for policymaking, from standard approaches such as cost-benefit analysis (CBA) and gross domestic product (GDP), to newer tools from emerging fields of research such as happiness studies.

“The jumping off point for the Handbook is the idea that we really need to move beyond income as the basis for policy evaluation,” said Adler. “For example, GDP looks at the total value of marketed goods and services in a year, so it’s a kind of income-based measure. It ignores non-market effects on well-being such as changes in the environment and changes in health. There is a lot that happens in a country that affects the quality of life which is not captured by GDP.

The complexity inherent in improved policy-relevant measures of well-being has engendered debate among scholars, which the Handbook addresses at length.

One approach to developing a tool for measuring policy effects on well-being calls for disaggregating multiple quality-of-life dimensions — such as income, longevity, environmental quality, educational attainment, and happiness — and then looking at a given policy’s effect on each of these. Another approach calls for a combined indicator which assesses each individual’s well-being as an aggregate of all of these categories. “This would result in an inclusive measure that would be based on someone’s attributes on all the quality-of-dimensions and would assign, in principle, a single well-being number to each person,” Adler said.

The importance of defining and crafting new policy-evaluation methodologies lies in their application to vital political issues such as income inequality, environmental impacts on health and quality of life, and educational access and attainment, said Adler.

The Handbook is intended for use by scholars, students, and policy analysts in government or “think tanks” who are considering any aspect of the problem of orienting policy to well-being, Adler said, adding that the way the volume synthesizes information and approaches is unique. “There really isn’t anything else out there that attempts to bring in the economic, philosophical, and psychological aspects of this field.”

Adler, the founding director of the Duke Center for Law, Economics, and Public Policy, has focused much of his work on the issues covered in the Handbook, and is the author of New Foundations of Cost-Benefit Analysis (Harvard, 2006; co-authored with Eric Posner); and Well-Being and Fair Distribution: Beyond Cost-Benefit Analysis (Oxford, 2012), which systematically discusses how to integrate considerations of fair distribution into policy analysis.

The Center for Law, Economics, and Public Policy has convened a series of conferences and workshops on the questions addressed in the Handbook, focusing on such topics as the equality of opportunity, inequality and the economic analysis of climate change, the social cost of carbon in regulatory analysis and new scholarship on happiness.

Reconsidering approaches to measuring well-being and developing new ones goes beyond theory, Adler said, noting some of the newer, more nuanced approaches are gradually being adopted and used by governments and institutions.

“Starting the 1990s the United Nations has used some of these tools in its World Development Report, looking not just at income, but life expectancy and educational attainment in different countries. More recently it’s adopted a multidimensional approach to measuring poverty, in the Human Development Index.” The United Kingdom, Adler said, has integrated happiness statistics into their official information and statistic gathering, and has started to shift from using traditional CBA to distributionally-weighted CBA, which is more sensitive to equity, to shape policy.

Helping governments adopt the more complex tools is among the chief goals the editors have for the Handbook, Adler said.

“Inequality and poverty, and the factors such as the environment that affect them, are important topics that aren’t going away,” he said. “There is a lot of discussion in the book about how to measure poverty and how to design policy to be more sensitive to that. Governments don’t really use inequality metrics much, but there is a whole body of research using those right now, and the hope is that the Handbook would be useful in bridging the gap between those two worlds.”