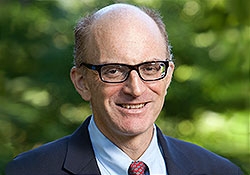 Professor Matthew Adler, who has long focused on augmenting cost-benefit analyses by factoring a measure of human well-being into the assessment of policy, says it is time for solutions to give greater weight, or priority, to those who are worse off.

In his contribution to a new book, Climate Change and its Impacts: Risks and Inequalities (Robert McKim, Colleen Murphy and Paolo Gardoni, eds., Springer, 2018), Adler, the Richard A. Horvitz Professor of Law and Professor of Economics, Philosophy, and Public Policy demonstrates how this “prioritarian” social welfare function can be applied to evaluate climate policy, contrasting it with the discounted-utilitarian approach more common in climate economics.

That dominant approach ignores the well-being levels of individuals affected by policies and somewhat arbitrarily gives preference to earlier generations, Adler writes in “Utilitarianism, Prioritarianism, and Climate Change: A Brief Introduction.” Prioritarianism drops the “discount” factor. And it doesn’t merely “add up the well-being numbers,” but rather adjusts them so as to favor policy options that lead to improvements in or the avoidance of loss of well-being of those who are worse off. “It is thereby sensitive to the distribution of well-being,” he writes. “Moreover, because no time preference factor is incorporated in the [social welfare function’s] formula, there is no bias in favor of earlier generations.”

The initial choice of any social welfare function as a policy evaluation tool is “an exercise in ethical deliberation,” and climate change is a central ethical issue of the age, says Adler, the founding director of the Duke Center for Law, Economics and Public Policy. Therefore, climate policy involves inherent tradeoffs between current and future generations. “If we can reduce our output of carbon, for example, it will likely mean that we have fewer material goods and less investment,” he says. “If we invest less now, future generations may have a cleaner environment, but less infrastructure and advanced technology.”

In the chapter, Adler demonstrates how the two different approaches of the “discounted utilitarian” and “nondiscounted prioritarian” social welfare functions apply to three specific topics of concern for climate economists: the Ramsey formula, which assumes that social welfare is a function of total consumption in each generation “spread equally among all individuals alive”; optimal mitigation, which would channel resources away from consumption at a given point in time in order to reduce future harm (or reduce harms to future consumption); and the social cost of carbon, which helps determine a price to be imposed on the emission of a ton of carbon through a carbon tax or a cap-and-trade system’s market price. Adler, in fact, first teamed with others to apply a prioritarian social welfare function to the social cost of carbon in a groundbreaking 2017 Nature Climate Change paper titled “Priority for the worse off and the social cost of carbon,” an endeavor he details in the current piece.

Adler writes in the chapter that the application of the nondiscounted prioritarian social welfare function to the challenge of optimal mitigation of climate change is particularly interesting. Integrated assessment models seek to determine the ideal, coordinated approach to mitigating climate change by setting goals for production, consumption, and investment, taking a number of variables into account. The simplest models used by economists ignore variations within populations and often assume that future generations will be better off than the present generation due to economic growth, even if climate change eventually slows the growth rate, he explains.

“In that simple framework, the prioritarian is actually willing to make less effort to prevent climate change than the utilitarian, because the current generation is the worst off,” he says. “In this very simple model, if the question is how much we should sacrifice our current well-being for the sake of future generations, the prioritarian is going to sacrifice less than the utilitarian.”

Given that adverse environmental effects affect the poor within each generation disproportionately, “the picture looks very different,” Adler says. “So that’s part of what I was doing in this chapter by introducing intra-generational inequality: thinking about how inequality within future generations would affect the degree to which we want to mitigate now.”

Adler continues to develop the theory of prioritarianism and its application to a variety of policy domains, including also risk regulation and health policy, in his scholarship and with colleagues in the Prioritarianism in Practice (PiP) research network, who collaborate on a wide range of research projects. “This is an international research network devoted to improving our understanding both the theory of prioritarianism and its application to various policy domains, including tax policy, risk regulation, public health, climate change, and education,” he says. Adler hosted the PiP network’s second annual workshop at Duke Law School on Sept. 7 and 8.