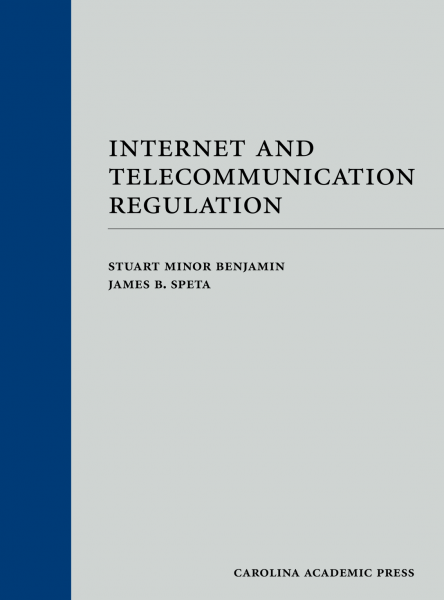 A new casebook coauthored by Douglas B. Maggs Professor of Law Stuart Benjamin, Internet and Telecommunication Regulation, guides students through some of today’s biggest public debates, among them whether all internet traffic should be treated equally by service providers, as net neutrality dictates, and how online privacy and content should be regulated.

Benjamin, Duke Law School’s associate dean for research and co-director of the Center for Innovation Policy, and co-author James Speta, the Harry R. Horrow Professor in International Law and vice dean at Northwestern’s Pritzker School of Law, had previously published four editions of their casebook, Telecommunications Law and Policy. But because so much of internet regulation builds on telecommunications regulation and spectrum policy, combining the two is now critical, Benjamin said. He spoke to Duke Law Magazine about the new casebook, published by Carolina Academic Press earlier this year, and about the legal and political challenges of regulating the internet.

Duke Law Magazine: You argue that debates over internet regulation hinge on whether internet service should be classified as a telecommunications service or an information service. Why is that important to the net neutrality debate?

Stuart Benjamin: This goes back to the earliest touchtone phones in the Bell System (the corporate precursor to AT&T). Dialing somebody with your touchtone phone was a “basic” service, and things like voicemail were “enhanced” services. The idea was to regulate the basic services and give enhanced services a lighter regulatory touch. That is central to the 1996 Telecommunications Act. And more importantly, it’s the central statutory distinction in the net neutrality debate: Should we understand broadband internet access as a basic telecommunications service or an enhanced information service?

Supporters of net neutrality regulations argue that using the internet is like calling somebody on a phone — like a telecommunications service. Because if some aspects of broadband internet access are telecommunications services, then the government can regulate the companies that provide them as common carriers and can make sure that, for instance, Comcast and Verizon charge a reasonable rate and cannot charge more to anybody even if they are willing to pay more. They have to charge ESPN.com the same as they charge the competitor to ESPN.com.

If the manipulation is so great that internet service is an information service, then the providers are not common carriers and can’t be subject to net neutrality and other regulations. So everything goes back to this definition between telecommunications and information services that nobody at the time was thinking of in terms of the internet when the 1996 Telecommunications Act was enacted.

DLM: How different would today’s debate over net neutrality be if the government had decided to take a more active role then towards internet regulation during its emergence through the 1990s?

S.B.: It would have changed the debate, no question. There’s a reasonably broad view that when industries are just getting off the ground, unless we think they will do some terrible harms maybe the government should just let them develop a little bit and see where things go. But when industry becomes more mature, maybe it might be more appropriate to have government regulation, especially if you have concerns that sound in competition policy. That’s what advocates of net neutrality would say.

But the large telecom and cable companies that provide internet services make this argument against net neutrality: ‘We want to invest billions of dollars in getting more and more fiber to homes, and we are not going to do that if we can’t monetize it. And the way we are going to monetize it is with a non-neutral net. That’s how we are going to make the extra money.’

The bottom line is, if we had a much more active regulatory role in the 1990s it very well may have more easily enabled net neutrality. But it also may have had a whole lot of other effects that are pretty lousy in terms of inhibiting the robustness of the internet.

DLM: Why hasn’t been there any legislation to address the internet since the Telecommunications Act of 1996, or why hasn’t it been revised?

S.B.:  I think there are two reasons it hasn’t been significantly revised. One is the sense that the ground is shifting underneath our feet, so if Congress tried to write new legislation, it might get it wrong. The other is there’s never been sufficiently stable political will to change it, in part because everybody is so uncertain about how things are going to shake out in the future. So while everybody recognizes the statute was written at a time when Congress knew almost nothing about the internet, it is now what we’re stuck with. In some ways it’s fascinating and in some ways it’s frustrating that, as a lawyer, you are having to plumb the depths of this statute that wasn’t really written with anything like the internet in mind.

To avoid having net neutrality policy change with each administration, you need a statute, and I am expecting the issue to be resolved, ultimately, legislatively. I think there will come a time when there will be a stable enough majority in Congress to agree to something. I can say that every single Democratic presidential candidate is going to be running on a platform of, among other things, reinstating net neutrality. It will absolutely be front and center in the 2020 campaign, there’s no question about it.

DLM: Your students are all digital natives. How do they view the current regulatory debates?

S.B.: Well, whether they do or don’t support net neutrality, I think students are genuinely surprised at how much of the current regulatory structure arises out of these technologies that they think of as being their grandparents’ technologies. They are genuinely surprised to find out that a lot of the debates that we are having now are actually just new versions of debates that we had in telecom policy 30 and 40 years ago.

S.B.: The First Amendment poses a huge barrier to any regulation of content. And in fact the only attempts at direct regulation of internet content have been invalidated by the Supreme Court — the Communications Decency Act and the Child Online Protection Act. We talk about that in the casebook.

DLM: What other areas merited a substantial update of the casebook?

S.B.: The internet section also includes a discussion of regulations involving discrimination like advertisements on web pages like Roommates.com — can you advertise in ways that would violate our non-discrimination laws by saying you only want a roommate of a particular gender, or a particular ethnicity, or a particular religion? Those are all advertisements that newspapers can’t run because they violate our non-discrimination laws. When they go online, people are accustomed to saying, in effect, ‘I want a world tailor-made for me,’ but we’ve got a bunch of laws that say, ‘You don’t get to do that, actually.’ So we’ve added a lot of materials on issues like that.

One of the big cases in our book involves a relatively obscure section of the Telecom Act, Section 230, that says if you’re an intermediary, you can’t be liable for what’s on your website. Doe v. Backpage.com involved a case of sex trafficking [arising from an online ad]. Backpage.com claimed to just be an intermediary. But the court found Backpage actually knew exactly what was going on and wanted those companies to advertise with them, and denied it Section 230 protection. This is a huge issue because there’s all sorts of stuff that gets posted on YouTube and elsewhere, and the host company says, ‘Look, we can’t monitor everything and we’re not going to monitor everything,’ and the people who are harmed by the posting say, ‘I’m not going to be able to go after the random person who posted it; I need to be able to go after you.’ That is going to continue to be a major issue going forward.”

Spectrum policy is also hugely important because more and more of our lives are wireless, and if you communicate wirelessly you need to use wireless frequencies. That’s what 3G and 4G and 5G are all about — getting more and more data wirelessly and the question is, what is the regime going to look like when we have that? To what extent do we want to, say, require that there be sharing of spectrum as opposed to these entities that just control their place on the spectrum outright? That’s another tremendously important set of developments that the book captures.