Texas made news when it passed one of the strictest abortion bills in the country in May. The bill, known as SB 8, or “The Texas Heartbeat Act,” went into effect Sept. 1, and it allows any person to sue any person who performs or 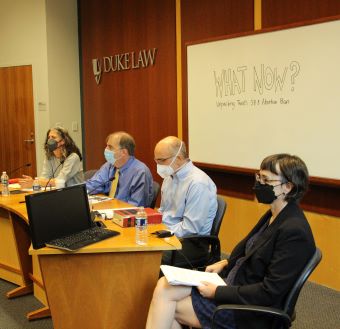 induces an abortion, or who aides or abets one, once a heartbeat is detected in the embryo, which is usually around six weeks into a pregnancy.

What makes the Texas bill unique is that it does not include any enforcement by the government. It is enforced only by private citizens who bring civil lawsuits that could result in awards of $10,000 or more. Several lawsuits have already been filed to challenge the law, but they are currently pending. Duke Professors Matthew Adler, Ernest Young, and Maggie Lemos sat down for a panel discussion moderated by Clinical Professor Hannah Demeritt last Tuesday about the unique structure of this law, why it will be difficult to challenge, and how it might be overturned.

Here are some excerpts from the discussion:

On Existing Law and the Standing Needed to Bring a Suit

“If SB 8 were enforced by the state, would it be unconstitutional? I think the answer is clearly, ‘yes.’”

“[Planned Parenthood of Southeastern Pennsylvania v.] Casey says prior to viability, a state may not generally prohibit abortion. That’s actually clear if you look at Casey. The court says before viability, the state’s interests are not strong enough to support a prohibition of abortion. So, a general prohibition of abortion pre-viability is unconstitutional under Casey.”

“What changes as we shift to private enforcement? In general, the constitution requires state action.”

“First of all, these actions on the part of the state legislature - this is not merely a fine, this is a prohibition. Second, there is the point that these fines will be imposed by state judges and that will be state action. The imposition of liability on physicians by state judges would be state action here. You can even argue that the private enforcers are state actors, but I think, even without that, there is state action.”

“I think what makes this interesting is the procedural lengths that Texas has gone to to make this law difficult to challenge.”

“What makes the law unusual is not that we have private enforcement. We have all sorts of laws that are in private enforcement - securities law, most of the environmental statutes… What makes this unusual is that there is no public enforcement, and the reason why that’s a problem is that the norm in challenging a law that you think violates the constitution in the modern era is something called pre-enforcement review - that is, you sue preemptively …. before the law is enforced against anybody. That way, you don’t have to risk going to jail or a fine or something in order to challenge the law.”

“Usually, it’s not that hard to get pre-enforcement review because there is a government actor. You know who to sue…. Here, the government actors that you would usually make your targets can’t enforce the law, so you can’t sue them. It’s hard to find a dance partner if you’re going to bring a lawsuit to litigate the validity of this law.”

On Crafting a Legal Challenge to SB 8

“You couldn’t just litigate the validity of the statute the old-fashioned way, which is to go out and violate it and then defend when somebody sues you. For most of our history, that is the way that most constitutional rights were asserted. That may not be satisfactory to everyone.”

“You’d also have the option once somebody sues you of then bringing your own claim in federal court against that person, who’s now designated themselves as the enforcer of the law in your case, and getting an injunction in federal court against them enforcing the law against you. That would give you a vehicle for litigating the validity of the case in federal court, which you might prefer. Now, ordinarily, that’s really difficult because, ordinarily, there are severe limits on the ability of federal courts to enjoin lawsuits in state court, but none of those apply here, and this is the cost of the innovative strategy that Texas has pursued.”

“You’ve got to be willing to play a little bit of a game of chicken, but you don’t have to just see how things turn out in state court. You can immediately sue in federal court.… I think that your prospects are really good there.”

On the Private Enforcement Aspect of the Law

“The Supreme Court has said [of standing], ‘No, you have to show that you’re harmed in a particularized way.’ It can’t just be disgruntlement with something that’s happening in the world far from you. And so, either Texas is allowing lawsuits without any injury whatsoever, or it is conceiving of a kind of injury that feels new to me, or at least distinctive in private enforcement regimes, and that’s sort of an ‘I’m offended’ injury.”

“These sorts of laws, you may know, are cropping up in other states…. It’s not impossible to come up with an injury, but it’s a different type of injury than [in more conventional private enforcement regimes]. So that’s one of the reasons why this law is getting so much attention ... the idea that it may be part of a trend of creating this sort of bounty for what are really political and moral disagreements. To many of us, that’s a dystopian vision of where we may be going in terms of private litigation.”

“I would hope that there would be kind of a mutual assured destruction settlement on this. I don’t want Congress enacting a statute that says people who are offended by the fact that their next door neighbor has a gun at home can bring a suit against them or something like that. So hopefully, this is a kind of flash in the pan. People will figure out that this is a pretty destructive form of litigation.”

Ernest Young is the Alston & Bird Professor of Law. He teaches constitutional law, federal courts, and foreign relations law. He is one of the nation's leading authorities on the constitutional law of federalism. He has been the principal author of amicus briefs on behalf of leading constitutional scholars in several recent Supreme Court cases.

Maggie Lemos is the Robert G. Seaks LL.B. ’34 Professor of Law. She is a scholar of constitutional law, legal institutions, and procedure.  Her scholarship focuses on the institutions of law interpretation and enforcement and their effects on substantive rights.