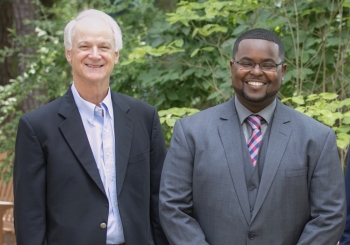 Duke Law’s Civil Justice Clinic has received a cy pres award that will be used to further the work of its Eviction Diversion Program.

A cy pres award is a charitable distribution from funds remaining from a class action settlement after the class members, fees, and expenses are paid. The award to the clinic came from a case in North Carolina state court against Southwood Realty Company, a property management company that in April 2020 agreed to pay $7.09 million to settle claims it unlawfully collected various eviction filing fees from tenants.

Clinic Director Charles Holton ’73 and Supervising Attorney Jesse McCoy called the gift “a very welcome surprise” and credited plaintiffs’ co-counsel Karl Gwaltney of Maginnis Howard and Patrick Wallace at Whitfield Bryson in Raleigh with recommending the Eviction Diversion Program as the recipient. While the clinic did not have a role in the Southwood case, Holton and McCoy regularly consult with lawyers across North Carolina about housing and eviction matters.

“We are thrilled, both with the settlement result that we received for North Carolina tenants and with the cy pres award for the Civil Justice Clinic,” Gwaltney said. “We understand how beneficial your organization is for an underserved community and are excited to contribute to its continued success.”

The clinic will use some of the funds to hire several student summer interns in anticipation of a significant increase in eviction filings expected after a national eviction moratorium expires June 30. Additional funds will be used to support other aspects of the program.

Courts have not scheduled eviction hearings for nearly a year because of various moratoria, judicial directives, and executive orders dating back to March 2020, McCoy said. Failure to pay rent is the reason behind the “vast majority” of evictions during the Covid-19 pandemic.

“Landlords have been holding off filing because they knew they weren’t going to get anywhere,” Holton said. “So we will likely see a new bubble of eviction filings.”

Created in 2017 in partnership with LANC, the Durham Eviction Diversion Program currently assists several hundred clients per month. It has enabled tenants and landlords to avoid eviction in about 80% of its cases. The program receives support from the City and County of Durham and the North Carolina Bar Foundation and has served as a model for similar programs in other cities, including Charlotte, Greensboro, Richmond, and Atlanta.

The clinic’s student-attorneys assist clients by negotiating with landlords on payment plans for rent in arrears and voluntary move-outs in lieu of eviction, accessing public funds for rental assistance, and providing representation in court on matters such as habitability concerns, discrimination, and illegal fees. Besides direct intake of clients, the clinic is able to work with clients that LANC cannot serve due to federal restrictions, including undocumented residents and tenants who make slightly more than LANC’s income limit but not enough to afford private legal representation.