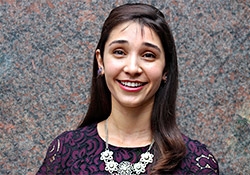 Malekos Smith assumes the yearlong joint appointment after serving as an attorney in the Judge Advocate General’s Corps of the U.S. Air Force, where she held the rank of captain at Hurlburt Field in Florida. Prior to military service, she was a post-doctoral fellow in the Cyber Security Project at the Harvard Kennedy School’s Belfer Center for Science and International Affairs. She majored in Russian and international relations at Wellesley College, where she was a fellow of the Madeleine Korbel Albright Institute for Global Affairs, receiving both her BA and her commission from the Air Force Reserve Officer Training Corps program at the Massachusetts Institute of Technology in 2013. Malekos Smith received her JD degree from the University of California, Davis School of Law, where she pursued a self-concentration in cyberlaw. She is currently completing an MA with the Department of War Studies at King’s College London.

Her publications include: “Swinging a Fist in Cyberspace,” Houston Law Review: Off the Record, Volume 9, Issue 1 (2018); “Imagining a Killer Robot’s First Words,” Harvard Kennedy School Review (2018); “What Alexander Hamilton Can Teach us About Cyber Policy,” Defense One (2018); and “The Great Cyber Solarium Dialogue,” The Cipher Brief (2018). She has also presented her research at DEF CON, RSA, and NextGen@ICANN.

Malekos Smith’s interests and expertise are an excellent fit for the fellowship in which she will work with faculty members in DCLT, LENS, and related centers to advance Duke Law’s role as a leader in fields at the intersection of law and technology, privacy, and cybersecurity, said Associate Clinical Professor and DCLT Director Jeff Ward JD/LLM ’09. DCLT coordinates and organizes may of the Law School’s leadership activities designed to understand, envision, and shape the next generation of tech-enabled legal practice and to maximize access to justice through emerging technology. LENS, which promotes education and discussion of a broad range of complex issues related to national security, has emerged as a leader in research, scholarship, and teaching in such areas as cybersecurity, cyberespionage, cyber warfare, and the role of artificial intelligence in U.S. Security.

“She is imaginative and prolific and has demonstrated a willingness to think about rapidly evolving issues, such as ‘gray zone’ tactics in cyber operations — the interstitial spaces between war and peace where certain challenging cyber-tactics have evolved,” said Ward. “If it’s ‘meddling,’ what’s an appropriate response? What regime of law do you call upon — is it criminal law, law of war, neither? She is primed to think about these areas.”

“We’re extremely pleased to have her coming on board here at Duke Law” said Maj. Gen. Charles Dunlap, Jr., the executive director of LENS and a professor of the practice of law.  “She’s clearly one of the nation’s top emerging cyber scholars, and she has fresh and innovative approaches to the subject. At the recent 9th Annual National Security Law workshop in Charlottesville she used a very clever skit to explain the complexities of determining what constitutes a “use of force “ in cyberspace — and this is the kind of originality and creativity not often seen in academia.”

Malekos Smith called her receipt of the scholarship, which is supported by the Everett Family Trust, “an honor,” noting her interest in developing practical, analytically-driven solutions to the dilemmas arising from conflict in cyberspace. “I look forward to examining the legal, technical, and ethical dimensions of emerging technology to help promote cyber diplomacy,” she said.

As the Reuben Everett Cyber Scholar, Malekos Smith will also work to bolster connections between all of Duke’s many curricular offerings and activities that relate to cybersecurity and law and technology.

“Institutionally, we have a range of folks who work on various aspects of cyber issues, and Zhanna can help us converge some of those topics,” Ward said, listing, in addition to Dunlap, such colleagues as Senior Lecturing Fellow David Hoffman ’93, director of Security Policy and Global Privacy Officer at Intel Corporation, who teaches Information Privacy and Government Surveillance Law, and Shane Stansbury, LENS’ Robinson Everett Distinguished Fellow, a former federal prosecutor who teaches Investigating and Prosecuting National Security Cases as well as an introductory readings seminar on cyber law and policy.

“We could look at a single incident from the perspective of a privacy violation and David could teach about privacy from Intel’s perspective. And that same incident could be perceived as a potential criminal cyber issue that someone like Shane might teach, and it might actually be a national security issue that Charles Dunlap is looking at. And from a tech development standpoint, maybe that same incident is something that could have been avoided if you had included privacy-by-design principles or cybersecurity-by-design principles that I would explore. The Everett Cyber Scholar will add to, and consolidate these threads.”