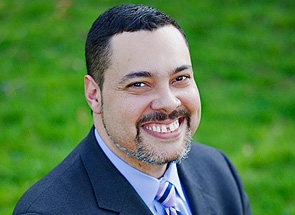 Darrell A. H. Miller, whose scholarship focuses on civil rights, constitutional law, civil procedure, and legal history, will join the governing faculty on July 1, Dean David F. Levi has announced.  Miller is currently a professor of law at the University of Cincinnati College of Law.  He taught Civil Procedure at Duke Law during the spring 2012 semester as a visiting professor, and will teach Civil Rights Litigation in the fall 2013 semester.

“Darrell Miller is a young scholar who is bringing new insights to our understanding of the Second and the Thirteenth Amendments,” said Levi.  “As our students and faculty discovered last year when he visited at Duke, he is a wonderful professor, colleague, and teacher.  He has a distinguished academic career, including selection as a Marshall Scholar, and a significant time in practice which he draws upon to the benefit of his students, teaching, and scholarship.  He is a terrific addition to our distinguished public law faculty.”

For his part, Miller said it was the opportunity to be part of that group that drew him to Duke. “It’s a fabulous faculty and an incredible public law faculty,” he said.

A gifted teacher, Miller was honored by University of Cincinnati law students in 2009 and 2010 with the College of Law’s Goldman Teaching Excellence Award.   In 2011, he received the College of Law’s Harold C. Schott Scholarship Award recognizing outstanding research and scholarly achievement; his Schott Scholarship Award Lecture was titled “The Second Amendment in Theory and Practice,” which touches on one broad focus of his scholarly agenda.

In a series of articles, Miller has addressed various aspects of the Second Amendment’s construction and implementation, probing the scope of and questions left unresolved by the Supreme Court’s rulings in District of Columbia v. Heller and McDonald v. City of Chicago.

Miller’s most recent article, published in the Yale Law Journal, is “Text, History, and Tradition: What the Seventh Amendment Can Teach Us About the Second.” The article seeks to offer guidance to the lower courts charged with implementing the Supreme Court’s Second Amendment jurisprudence, concluding that it is possible, though difficult, to be guided by the “historical test” used to implement the Seventh Amendment right to trial by jury.  Already the article has generated some attention, having been cited by advocate Charles J. Cooper in recent hearings before the Senate Judiciary Committee on proposed gun regulation.

In “Guns as Smut: Defending the Home-Bound Second Amendment,” 109 Colum. L. Rev. 1278 (2009), Miller compared the textual, historical, ideological, and policy concerns raised in First and Second Amendment cases, and suggested that one way to harmonize these disparate concerns would be to approach the right to keep and bear arms the same way the Court approaches the First Amendment right to possess adult obscenity: namely, strong protections in the home, but deference to democratically accountable institutions everywhere else.  His article was cited with approval by Justice John Paul Stevens in dissent in McDonald.

In “Guns, Inc.:  Citizens United, McDonald, and the Future of Corporate Constitutional Rights,” 86 N.Y.U. L. Rev. 887 (2011), Miller examined the Court’s controversial Citizen United case, which extended core political speech rights to business corporations, and asked whether that reasoning also applies to corporate claims to a right to keep and bear arms for self-defense.  The question of corporate Second Amendment rights serves as a springboard for Miller’s more thoroughgoing critique of corporate personality and corporate constitutional rights in general, as well as his investigation of the assertion of constitutional rights by groups and institutions, rather than by individuals.

The Second Amendment remains central to Miller’s scholarly agenda; he is planning projects focusing on the intersection between race, citizenship, and guns and on “Second Amendment equilibria,” among others.

“I’m trying to understand exactly what the Second Amendment protects,” he said.  “To say it protects self-defense is entirely too abstract to function as law.  So I am thinking of it in terms of American institutions like the police, like the militia, and like the standing army.”

“Darrell's scholarship directly addresses the central debates in Second Amendment law and scholarship; no one who is interested in the constitutionality of gun control can afford to ignore his work,” said Professor Joseph Blocher, a constitutional scholar who also has focused on the Second Amendment.  “He is a good friend and a wonderful scholar, and I can't wait to have him as a permanent colleague.”

Like his Second Amendment works, Miller’s body of Thirteenth Amendment scholarship explores themes of public and private collective action, the common law, history, race, and tradition in interpreting constitutional text.  His article “White Cartels, the Civil Rights Act of 1866, and the History of Jones v. Alfred H. Mayer Co.,” 77 Fordham L. Rev. 999 (2008) on the landmark 1968 Supreme Court ruling that held Congress has power, under the Thirteenth Amendment, to regulate the private sale of real estate in order to prevent racial discrimination, is viewed as a critical read for scholars interested in the case.  In “A Thirteenth Amendment Agenda for the Twenty-First Century:  Of Promises, Power and Precaution,” a chapter in a book on the history and contemporary relevance of the amendment banning slavery, Miller expands on his Fordham article, explaining how Congress might apply the Thirteenth Amendment to specific areas of public or private discrimination currently out of reach of its Commerce Clause or Fourteenth Amendment enforcement power.

In the area of civil procedure, Miller has written about the role of empathy and the judicial function.  In “Iqbal and Empathy,” 78 UMKC L. Rev. 999 (2010)

he addressed what role empathy should play at the critical, first phase of a lawsuit: whether a claim asserted within the four corners of a complaint is plausible on its face.  Professor Miller concludes that empathy, appropriately understood, actually could “lead to better and more unbiased decisions,” rather than to erroneous, or partial decisions, especially at this critical stage of a lawsuit.

“Darrell Miller is an excellent teacher and an energetic, ambitious, creative, and highly productive scholar.  He is making important contributions to a fast-growing area of legal doctrine with his Second Amendment scholarship and equally important contributions with the relatively under-researched area of Thirteenth Amendment doctrine,” said Guy-Uriel Charles, the Charles S. Rhyne Professor of Law and founding director of Duke’s Center on Law, Race and Politics.  “In his relatively short academic career, he already has become a significant ‘player’ in his chosen scholarly fields.  We are delighted to welcome him to the Duke Law faculty.”

Miller credits his background in practice, where he handled matters ranging from extremely complicated multi-district litigation in state and federal courts to smaller matters, with making him a better teacher of Civil Procedure.

University of Cincinnati students praised Miller’s ability to draw them into the subject matter at hand, in comments posted on the College of Law’s website:  “In his Civil Procedure classes, as well as his other classes, Professor Miller shows a fiery intensity that engages his students in the subject matter.  When Professor Miller is at his best, his students may forget they are even in a classroom.  Instead, they may feel they are watching a seasoned litigator delivering his closing argument in an important case.”