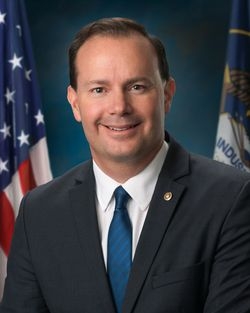 A sitting U.S. senator and the chief counsel of the Biden for President campaign will co-teach a class in Duke Law School’s D.C. Summer Institute on Law and Policy, a program for undergraduates and working professionals considering law school.

U.S. Sen. Mike Lee (R-Utah) and Dana Remus will teach Lawyers Branching Out: The Courthouse, the Capitol, and the White House. Joining them as a co-teacher will be David F. Levi, Levi Family Professor of Law and Judicial Studies at Duke, director of the Bolch Judicial Institute, and former dean of the Law School and Chief U.S. District Judge for the Eastern District of California.

“Students are in for an amazing experience this summer,” said Levi. “We are so lucky to have Sen. Lee back again. He brings students into the day-to-day life of a senator, and he explains, with humor and passion, what he hopes to accomplish in the Senate. Last year’s students also were fascinated by his discussion of the constitutional structure and took full advantage of his willingness to answer their questions and discuss the issues of our time.

“We are also so fortunate to have Dana Remus teaching in this program. Ms. Remus served as a deputy White House counsel during the Obama administration and is now the chief counsel of the Biden for President campaign. Prior to her government service, she was a highly regarded professor of law at both Duke and the University of North Carolina at Chapel Hill. She is a very skilled teacher and has recent experience working in the White House.”

Space is still available in the course as well as courses introducing students to U.S. constitutional law, legal reasoning, and legal persuasion and analysis. Classes meet in the evenings at Duke in DC, Duke University’s academic hub in Washington. Current Duke undergraduates can receive a full-tuition scholarship, funded by the Provost’s office, for one-to- three classes in the Institute, available on a first-enrolled, first-served basis.

Entering its seventh year, the D.C. Summer Institute aims to create a pipeline to law school for undergraduates and working professionals considering a career in law and policymaking. In addition to the classes, students are invited to presentations on applying to law school, taking the LSAT, and pursuing various careers with a law degree, as well as a special event with U.S. Supreme Court Associate Justice Ruth Bader Ginsburg in conversation with her former law clerk Neil Siegel, the David W. Ichel Professor of Law and Professor of Political Science at Duke.

Lee, who was first elected to the Senate in 2010, is Utah’s senior Senator. He is a member of the Judiciary Committee and chairs the Antitrust, Competition Policy and Consumer Rights Subcommittee. He also chairs the Energy and Natural Resources Committee’s Water and Power Subcommittee and sits on the Commerce Committee. In 2019, he became chairman of the Joint Economic Committee.

A graduate of Brigham Young University and BYU’s School of Law, Lee served as a law clerk to Judge Dee Benson of the U.S. District Court for the District of Utah and twice clerked for Samuel A. Alito, Jr., once while Alito was a judge on the U.S. Court of Appeals for the Third Circuit and again when he became an associate justice on the U.S. Supreme Court.

During the final year of the Obama Administration, Remus was the deputy counsel for ethics and deputy assistant to the president. Prior to that, she was a faculty member at the University of North Carolina School of Law, where she specialized in legal and judicial ethics and the regulation of the legal profession. She was a visiting professor at Duke Law School in 2012.

Remus, a graduate of Harvard College and Yale Law School, was also a Supreme Court clerk for Justice Alito and clerked for Judge Anthony J. Scirica of the U.S. Court of Appeals for the Third Circuit.

“When I was an undergrad at Duke, I really wanted to take classes at the Law School,” said Siegel, who directs and teaches in the Institute. “When David Levi and I were designing the D.C. Summer Institute, we knew we wanted to help undergrads and recent grads decide if they wanted to go to law school. No other summer program offers folks thinking about law school the opportunity to take classes with faculty members at a top law school.”