The Juvenile Sentence Review Board Clemency Project, which seeks clemency for petitioners sentenced as minors, won top honors in the state. 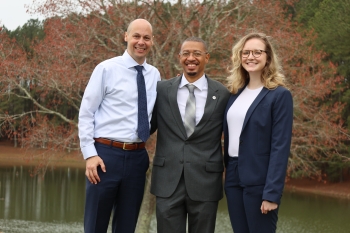 A Duke Law clemency initiative was honored by the North Carolina Bar Association at its annual meeting.

The Juvenile Sentence Review Board Clemency Project won the NCBA’s 2022 Law School Pro Bono Award, given to an outstanding law student group whose pro bono project advanced access to justice in North Carolina. Ben Finholt, director of the Just Sentencing Project at the Wilson Center for Science and Justice, accepted the award on behalf of the project during the NCBA awards dinner in Winston-Salem on June 24.

Members of the project provide pro bono representation to individuals who were convicted of crimes committed before they were 18 and have served at least 15 years of their sentences. It was launched last year by the Wilson Center for Science and Justice and the Center for Criminal Justice and Professional Responsibility in response to an executive order from Gov. Roy Cooper in April 2021. That order established an advisory board to review certain sentences imposed on juveniles and recommend clemency based on factors including incarceration records, developmental maturity and mental health at the time the crime was committed, and whether race may have played a role in sentencing.

According to Finholt, those who receive the harshest sentences as juveniles are overwhelmingly people of color. “Of those eligible for consideration by the Juvenile Sentence Review Board, 75% are Black/African-American and 82% are people of color,” he said. “This disparity requires continued review and action.”

More than 30 Duke Law students have worked directly with supervising attorneys to represent clients who meet the criteria for review. In March, Cooper commuted the sentences of three people including Anthony Willis, whose clemency petition was prepared by Adelyn Curran ’22, working with Clinical Professor Jamie Lau ’09, deputy director of the Center for Criminal Justice and Professional Responsibility.

“North Carolina law continues to change to recognize that science is even more clear about immature brain development and decision-making in younger people,” Cooper said in a statement announcing the commutations. “As people become adults, they can change, turn their lives around, and engage as productive members of society.”

Lau said Willis, now 46, is an exemplar of rehabilitation. During his 25 years of incarceration for murder he earned multiple degrees, among many other accomplishments. More than 30 people supported his clemency petition. He was released March 24.

“It is widely understood that people change—that a person in his teens is not necessarily a reflection of who he will be in his forties or fifties,” Lau said. “Mr. Willis has earned his second chance, and he is prepared to make the most of it.”

The JSRB Clemency Project also includes students from the law schools at UNC-Chapel Hill, Wake Forest, and Elon, volunteer attorneys affiliated with the schools, and non-law school pro bono attorneys. The Wilson Center serves as the clearinghouse for pro bono advocates and clients. More than 300 people in the state are eligible for review by the Juvenile Sentence Review Board, Finholt says.