Founding Director David F. Levi, the former dean of the Law School and former Chief Judge of the U.S. District Court for the Eastern District of California, will retire on June 30, 2022. 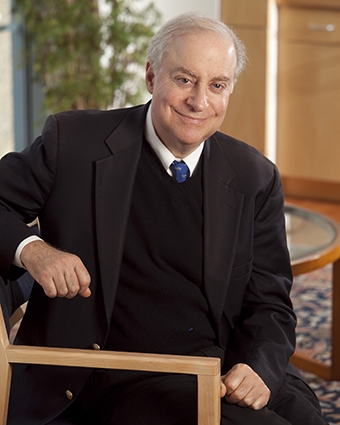 Duke Law School has launched a search for a new director of the Bolch Judicial Institute, which studies and advances rule-of-law principles, judicial independence, and law reform through technology and innovation.

David F. Levi, the institute’s founding director, announced that he will retire from his role on June 30, 2022, capping a 15-year tenure at Duke Law School that included 11 years as dean. Levi came to Duke in 2007 after serving 17 years as a U.S. District Judge for the Eastern District of California, the last four of which he served as the district’s Chief Judge.

“Thanks to David Levi’s visionary leadership, the Bolch Judicial Institute is one of Duke Law School’s crown jewels and plays an important role in fulfilling our teaching and research missions,” said Kerry Abrams, the James B. Duke and Benjamin N. Duke Dean of the School of Law. “I am so grateful to David for all he has done for the institute and for the Law School, and I look forward to working closely with the next director to build on this remarkable legacy.”

The job description for the position is available here. Interested candidates may contact Jack Knight, the Frederic Cleaveland Professor of Law and Political Science and chair of the search committee, for more information.

Levi led the Law School through 11 years of unparalleled growth, expanding the faculty, setting fundraising records for scholarships and new faculty positions, and strengthening the school’s connections to the practice and other academic fields through new academic and clinical programs and research centers. [Read more about his tenure as dean here.]

“Both as dean of the Law School and as director of the Bolch Judicial Institute, David has had a remarkable impact on the quality of the school and the strength of its faculty and students,” said Peter Kahn, chair of the Bolch Judicial Institute Advisory Board, a trustee of Duke University, and a member and past chair of the Duke Law Board of Visitors. “We will miss him greatly, but his significant work in solidifying Duke Law’s connections to the practice and the judiciary will help sustain us. More importantly, I know he will remain a great resource going forward, and a good friend to so many of us.”

Added Chief U.S. District Judge Lee Rosenthal of the Southern District of Texas, a member of the institute’s Advisory Board and the search committee for the institute’s new director: “David Levi was the perfect founding director of the Bolch Institute. With one foot in the judiciary, one in the academy, an uncanny appreciation of law practice, and the temperament of a demanding saint, he understood what judges needed, what the academy could help provide, and how that could engage and benefit the bar. The combination is the Bolch Institute. We are all the beneficiaries.”

In 2011, Levi established the Center for Judicial Studies to strengthen connections between the academy and the judiciary. In 2012, the Law School launched its Master of Judicial Studies program, the only academic master’s program in the country designed for sitting judges. In 2018, Carl and Susan Bolch established the Bolch Judicial Institute at Duke Law School with the mission of bettering the human condition through studying and promoting the rule of law.

Today, the institute provides unique educational opportunities for sitting judges in the United States and around the globe; conducts research and supports teaching and scholarship; and develops civic education initiatives to advance its mission. Among its flagship programs are the Master’s in Judicial Studies LLM program; Judicature, Duke’s scholarly journal on judging; a slate of conferences, workshops, and certificate programs that bring together lawyers, judges, and scholars to examine challenges and develop solutions for improving and advancing the administration of justice; and the Bolch Prize for the Rule of Law, which is awarded annually to an individual or organization who has demonstrated extraordinary dedication to the rule of law and advancing rule of law principles around the world.

“The Bolch Institute, under David’s leadership, has strengthened the ties between judges and the Duke Law community in many important ways,” said Knight. “One of the most important has been the ways in which he has increased the role of practicing judges in the ongoing activities of both students and faculty. To take just one example, the interactions between judges and faculty in the LLM program has enhanced faculty scholarship on such issues as judicial decision-making and the institutional practices of the courts.”

Since its founding in 2018, the institute has established itself as a leader in the effort to advance the rule of law and protect judicial independence in the United States and around the world, bringing together judges, academics, and practitioners to address important problems. The new director will build on this strong foundation to develop and expand programs that study the judiciary, study and preserve the rule of law, educate judges, and advance the importance of a fair and independent judiciary.

Reporting directly to the dean, the director will oversee and manage the staff of the institute and collaborate with the institute’s academic leadership, which includes Duke Law faculty who work to integrate the institute’s missions of advancing the rule of law and judicial independence with faculty research and scholarship and the education of JD students. The director, who will be a full-time member of the faculty, will also work closely and collaboratively with the the institute’s Advisory Board, Leadership Council, and donors.