Over an eight-year period, dozens of students in the Environmental Law and Policy Clinic honed skills relating to regulatory law and environmental advocacy by working, on behalf of a client, to stop the construction of a Titan America cement plant in eastern North Carolina.

The case wrapped up in March, when the company announced that it was scrapping plans to build the plant. The surprise announcement represented a victory to many residents of the coastal community of Castle Hayne and the clinic’s client, PenderWatch & Conservancy, as well as its partners in a coalition of opponents to the plant. 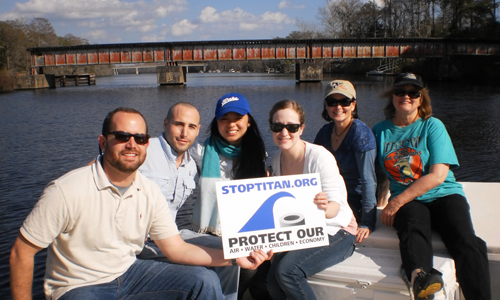 “Titan issued a statement that their decision was the result of changing economic conditions and that it had nothing to do with the opposition,” said Clinical Professor and Supervising Attorney Michelle Nowlin JD/MA ’92, who heard the new as she was helping students prepare for an April court hearing on issues of standing in the case. “The fact that they mentioned us at all suggested to us that perhaps opposition actually had a lot to do with it.”

Nowlin has supervised students’ work on the Titan case since she joined the clinic in 2008. Almost 50 students invested more than 2000 hours in the matter, negotiating a complex set of state and federal regulations, and issues ranging from air and water quality to environmental justice. David Schwartz ’15 said working on the case helped him to “become comfortable” with environmental advocacy and practice.

“The Titan case was my first practice-based exposure to Clean Water Act issues, and it was invaluable towards helping me solidify what I had learned about the Clean Water Act in my classroom-based environmental law courses,” said Schwartz, who is now a post-graduate Stanback fellow with the clinic. “Working on these issues forced me to become skilled at understanding complex regulatory and permitting regimes in relatively short amounts of time.”

“We worked with the Southern Environmental Law Center to challenge noncompliance with the state environmental policy act, and we won that case,” she said. “The court said that the company needed to conduct a comprehensive review of environmental impacts before it could proceed with any other aspect of permitting and construction. Instead of doing that, the company lobbied to change the law to eliminate the triggering event of receiving economic incentives from public funds.”

Titan’s lobbying efforts were successful, but the coalition was able to protect the court victory by ensuring the law would not apply retroactively, Nowlin said.  The company then returned the economic incentives provided by the state and county governments, enabling it to move forward without comprehensive review. 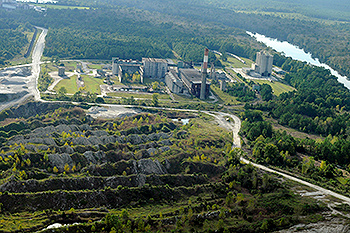 At that point, clinic students shifted their focus to the air pollution control permit and impacts to public and ecological health.  They participated in two rounds of public comments on the air pollution control permit, explored special protections available under the Endangered Species Act and Clean Water Act, and worked to educate the Environmental Protection Agency about the environmental justice concerns in the community, framing those concerns within the Obama administration’s environmental justice guidelines.

Doing so gave Brianna Elliott, who participated in the clinic as a master in environmental management student at the Nicholas School for the Environment, a fresh perspective on the case; she had earlier been involved in efforts to stop the plant’s construction as an undergraduate at the University of North Carolina-Wilmington.

“As an undergraduate, the Titan matter was really black and white for me — it was all about potential negative environmental impacts,” she said. “This time, however, Titan also grew into a socioeconomic issue in my eyes, and that was pretty powerful.”

Environmental Protection Agency officials also were affected by the environmental justice issues when they toured the area.

“Residents of this community don’t have much in terms of basic amenities like paved roads or sidewalks, water and sewer services, or access to healthcare or job opportunities, yet would take the bulk of the air and water pollution from the plant, and possibly have their drinking water affected once the plant started draining around 16 million gallons of water from the local aquifer every day,” she said.

In the last months of the case, students worked with environmental and administrative law professors from North Carolina law schools, including Duke Law’s Christopher Schroeder, the Charles S. Murphy Professor of Law and Public Policy Studies, to write an amicus brief on the history of federal standing requirements under the Clean Air Act and their relationship to delegated state programs. In that brief, filed in advance of the aborted April hearing, the legal scholars argued that the position advocated by Titan and the state permitting agency threatened to upend more than 30 years of established precedent and could undermine North Carolina’s authority to administer the federal Clean Air Act and other delegated programs.

Nowlin said the clinic and coalition will continue working to develop a forward-looking, environmentally sound economic development strategy for the Castle Hayne area.

Nowlin is pleased with the range of skill-building opportunities the case afforded her students.

“They experienced how a complex piece of environmental litigation plays out, how coalitions work together, and how important boots on the ground are to community organizing and education and sustaining a community’s interest over a very long and difficult battle,” she said. “They also got to experience the intersection of state and federal agencies, how the permitting process and delegation of authority works, and how that plays out with local officials as well.

“I’m proud of the students’ work and of the results they achieved. The Northeast Cape Fear River is an important resource for the region, and I’m hopeful it can now be protected for the community to enjoy for generations to come.”

Schwartz said his work on the Titan case helped confirm his interest in public interest environmental law. “It was a huge honor to work to assist a community that otherwise would not have received any legal help to address the very serious environmental harms threatened by the cement plant,” he said. “That sense of purpose in assisting others to assert their rights and protect their community has remained with me.”