When Michelle Nowlin, Emily Spiegel, and Melissa Bauer met for a mid-May lunch at the new Durham Co-op Market, they were delighted to see a sign in the window indicating the co-op was accepting federal food aid benefits. They saw it as a direct result of the work they had done on its behalf in Duke’s Environmental Law and Policy Clinic.

The co-op, which sells locally and sustainably grown produce and natural foods, opened last March about a mile from Duke Law School. During the 2013-2014 academic year, while the co-op was in the planning stages, its board of directors turned to the clinic, where Nowlin JD/MA ’92 is supervising attorney, for advice on a number of matters, including how to make what it sells available to consumers of limited means.

Committed equally to the environment, to profitability, and to the community, the members of the board were keenly aware that sustainably grown food is relatively expensive at the cash register, making it affordable only for middle and upper-middle-income consumers, said board president Frank Stasio. “We know cost is a challenge for families that are struggling to put food on the table and to meet all of their priorities,” including many families in the neighborhoods surrounding the co-op.

The problem of affordability and accessibility is critical to the clinic’s work on sustainable agriculture, said Nowlin, who also teaches a class relating to food and agriculture. “Current agricultural policies promote industrial-scale production and processed foods, and displace the actual costs of production,” she said. “This puts smaller, environmentally-responsible producers at a competitive disadvantage, and places healthier foods out of reach for families of modest means.

“The challenge the co-op, and sustainable agriculture more generally, faces is how to ensure these farmers earn a fair return on their labor while keeping their products affordable to everyone,” she said. “By involving tightly interconnected aspects of agricultural policies and food laws, the students were able to take their strengths in research, analysis, and critical thinking and apply them to address community health and social justice.” 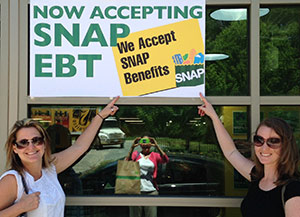 As clinic students, Bauer, who received her master’s degree in environmental management in 2015 from the Nicholas School of the Environment, and Spiegel, a 2014 law graduate, focused on different aspects of accessibility. Bauer explored which government food-access programs the co-op could join to help offset food costs to customers of modest means, while Spiegel identified compatible legal structures to supplement federal food aid.

After investigating government food-subsidy options, Bauer recommended the co-op apply to the USDA’s Food and Nutrition Service to be allowed to accept Supplemental Nutrition Assistance Program (SNAP) benefits and outlined a timeline to help reach that goal as soon as possible after opening. Based on her discussions with operators of similar markets in other cities, she also recommended the use of SNAP Electronic Benefit Transfer (EBT) cards that look like and are read by point-of-sale systems as debit cards.

“That way, nobody else in the check-out line knows a customer is using SNAP benefits,” she said. “People do not want to self-identify as having to use benefits in what is generally seen as an affluent store.” The recommendation was consistent, she noted in her report, with the board’s goal of making SNAP shoppers “feel as welcome and inconspicuous as possible.”

Bauer advised the board against joining the USDA’s Special Supplemental Nutrition Program for Women, Infants, and Children (WIC) program. Unlike SNAP benefits, which can be used at the consumer’s discretion, Bauer reported that WIC-eligible foods are brand and size specific.

“With WIC you can buy a 12-ounce package of Kellogg’s Corn Flakes, for example,” she said. “The program specifies brands that aren’t likely to be carried in the co-op and involves a complicated infrastructure, in any event.” In fact, she found that in North Carolina, WIC benefits are not offered by any food chains with fewer than 75 stores. A better option, she said, would be for the co-op to find ways to match and maximize SNAP benefits.

Exploring options for supplementing SNAP benefits was the focus of Spiegel’s clinic research. “The basic idea,” she wrote in her report to the board, “is that a customer paying, for example, $20 in SNAP funds would be reimbursed with credit or a voucher toward additional purchases at the co-op, potentially up to a matching $20.” Similar approaches are common at farmer’s markets.

Spiegel, who rejoined the clinic as a Stanback Fellow in January 2015 after an internship in the United Nations Food and Agriculture Organization’s development law office in Rome, addressed how the co-op might design and structure a matching program. This involved canvassing co-ops and farmers’ markets around the country to learn how they defined eligible purchases and set matching levels and researching legal structures that could allow charitable funding to sustain the program without running afoul of tax laws.

Emphasizing in her report that decisions on program priorities and design would influence its organizational structure, Spiegel identified several viable options for funding an added-benefits program: through store profits and non-deductible donations, through a charitable entity affiliated with the co-op, or through a fiscal sponsorship with an unaffiliated charity. She also outlined a process for moving forward.

The research was extremely helpful, said Stasio, who noted that it saved the co-op’s general manager considerable effort as she crafted a workable supplementary-benefits program for the fledgling operation. “When the clinic looked into this vision that we had as a board about partnering with nonprofits, they scoped it out thoroughly and helped us understand they were pretty complicated and may not be practical for our start-up at this point,” he said.

Through its “Food for All” program, the co-op currently offers a 10 percent discount on all non-alcohol purchases and offers about two dozen grocery staples at or near cost to members who qualify for SNAP benefits.

Other student work on behalf of the co-op focused on community outreach and state regulations pertaining to food preparation and retailing.

As an environmental policy student, Betsy Cook MEM ’14, devised a detailed qualitative survey that was circulated through the adjacent neighborhood to gather information on residents’ shopping preferences and needs as well as their attitudes towards the new market, which aims to be a community gathering space as well as a grocery store.

David Schwartz ’15 undertook in-depth research into North Carolina laws and regulations pertaining to the preparation, storage, and labeling of food produced in commercial and home-based facilities. His report, Stasio said, is likely to be particularly useful as the co-op looks into offering such things as locally produced jams and condiments in collaboration with the operators of a recently certified community kitchen.

All the students’ work product and reports, which were handed off to the co-op’s general manager and staff, helped the board make realistic decisions to further its goals for the operation, Stasio said. “It was vital to have that kind of good work,” he said. “You need some professional expertise to help focus you and help point you in the right direction. It was critical in getting us focused on what we could do quickly.”

The students gained equally critical skills. Schwartz, who will soon rejoin the clinic as a post-graduate Stanback Fellow, said his work for the co-op’s board, as well as other clinical projects, helped him understand how to engage in research on behalf of a client. “It was great to have the responsibility to go out and thoroughly pursue various angles of the work — ‘I haven’t seen any regulations on this detail, so I’ll go and do some more research.’”

Bauer, who in other aspects of her environmental policy studies worked on producer matters such as pesticide controls, said it was useful to see “the other end of the supply chain” with her food-access research on behalf of the co-op’s board. “Tackling how we get the food to the people who need it once we’ve gotten it to the store was incredibly interesting,” she said. “And it’s cool that the co-op is just a mile down the street. When we went to lunch and saw the SNAP benefits sign, we said, ‘We did this!’ it was great to see real-life tangible implications of our work.”