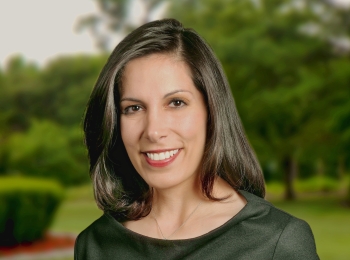 Nita A. Farahany JD/MA ’04, PhD ’06, the Robinson O. Everett Professor of Law and professor of philosophy, received the 2021 Distinguished Teaching Award during the annual Duke Outstanding and Noteworthy (D.O.N.E.) Awards sponsored by the Duke Bar Association on April 13.

“I consider this award to be, honestly, the most humbling honor of my professional career,” Farahany said. “Teaching is its own award, but to receive this award honestly brought me to tears.”

The D.O.N.E. Awards are presented each year by the DBA, and they are selected by a committee representing all three class years after seeking nominations and feedback from the student body. The Distinguished Teaching Award is accompanied by a stipend made possible by support from the Class of 1967.

Sasha Kahn, the academics chair for the DBA, read from praise submitted by students as he presented the award to Farahany during the virtual ceremony.

“What stands out to me every day is her extraordinary vulnerability and her deep commitment to making all of her students feel like human beings,” Kahn read from one nomination. “She opens every class asking about our lives, celebrating achievements, engagements, and cute pets. She shares details of her life with us to bring a smile to our faces and help us not feel so alone.”

Farahany called teaching “a true joy and a privilege that I have been so grateful for every day.”

Farahany said that much of her teaching success can be attributed to her dedicated students, and she shared an anecdote from her first day of teaching Criminal Law. She said some students approached her after class with graphs and charts showing the number of pages that she was assigning each night based on the number of credit hours was much higher than that of other 1L classes they were taking.

She said she appreciated their boldness, but also, “it made me realize just how much great teaching really depends on great students. A great teacher is somebody who can learn from their students. They learn how to teach by learning from their feedback.”

Farahany also thanked her mentor, John S. Bradway Professor of the Practice of Law James E. Coleman, Jr., who was also her Criminal Law professor when she was a student at Duke Law.

“He showed me what true mentorship means: Commitment, and believing in your students, listening, and treating your students as colleagues, and genuinely investing in knowing them – who they are as people, their passions, their vulnerabilities.”

She noted that “this has been the hardest year I’ve ever had the privilege of teaching Criminal Law,” not just because of quarantine and the challenges of the pandemic, “but also because of the injustices that we’re confronting every single day in criminal law.” But she praised her students for their willingness to adapt and to embrace the challenges to engage with the material in new ways.

The DBA also gave a Distinguished Staff Member Award for the first time this year.

“Duke Law’s staff members have gone out of their way to transition the law school experience to this virtual setting,” Kahn said. “The DBA Board thought it was befitting that on this night of celebration, we recognize the successful and hard-working staff of our school, too.”

Mwombela, the winner, “has been a rock-solid resource for me as a LEAD Fellow this year,” Kahn read from one nomination. “She has risen to meet the challenges and restrictions of the pandemic with creativity and compassion. I always know I can reach out to her as a sounding board and support in my role as a LEAD Fellow. She is kind, honest, transparent, and available to help in whatever way she can. She is one of those staff members who supports students above and beyond her job description, and we all love her for it.”

Mwombela thanked student leaders and staff members who supported her and the Law School over the course of the year.

“It’s a true testament to our students’ care and compassion that, despite everything they’ve been through this year, they took the time to recognize the staff,” she said. “Thank you so much for this honor. While I’m grateful to be the first one to receive it, I’m even more thrilled to know that I won’t be the last.”

Three awards were given in recognition of the work of student organizations: