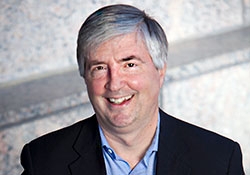 Professor Lawrence Zelenak’s new book chronicling the early development of the federal income tax grew out of his curiosity about two provisions of the law that give taxpayers basis in situations where no tax has actually been paid: the tax-free step-up in basis at death and the charitable deduction for unrealized appreciation in donated property.

“Basis, or cost of property, is a fundamental tax concept that is supposed to reflect amounts on which you’ve already paid tax,” said Zelenak, the Pamela B. Gann Professor of Law. “These provisions, which have been around almost since the beginning of the federal income tax in 1913, seem to be the result of naïve conceptual mistakes rather than policy decisions to subsidize death in one case and charitable contributions in the other, but nobody had tracked down the details.” Finding that policymakers had spotted the errors early on, he was surprised by their reaction. “In one case, the mistake was recognized but not corrected,” he said. “Even though they fixed the same basic mistake regarding inter vivos gifts, they didn’t fix the mistake regarding property transferred at death. And maybe even more surprising, in the case of the charitable deduction, they fixed the mistake in 1920 and then un-fixed it in 1923, and it’s with us today.”

Zelenak’s delight in uncovering the story behind those early errors led him to research the source of other possibly dubious policy choices made by Congress and the U.S. Department of the Treasury in the first decade of the federal income tax regarding the treatments of marriage, capital losses, charitable contributions, homeownership, and other matters, as well as the key figures (and one newspaper’s advice column) that helped draft, shape, and clarify U.S. tax law. He spoke to Duke Law Magazine about Figuring Out the Tax: Congress, Treasury, and the Design of the Early Modern Income Tax (Cambridge University Press, 2018). 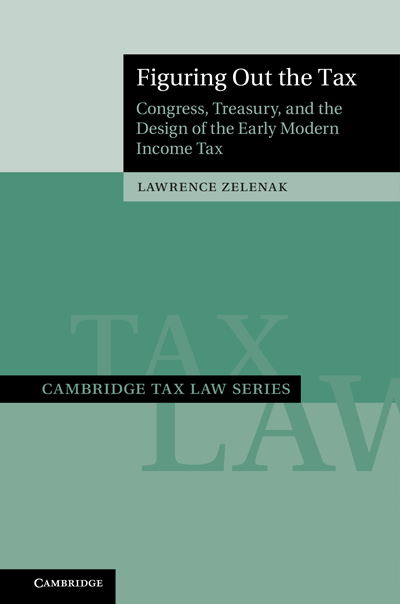 Duke Law Magazine: Your story starts with Cordell Hull writing the tax. Who was he?

Lawrence Zelenak: This is a remarkable guy. He wrote the 1913 income tax almost singlehandedly as a young Democratic congressman from Tennessee. He volunteered for the task because he was obsessed with the goal of there being a federal income tax — he thought tariffs were oppressively regressive — and he was willing to do anything to make that happen. He had studied everything he could get his hands on about income tax for about 10 to 15 years prior to actually writing the 1913 income tax. Much later, Hull was Roosevelt’s secretary of state, and is still the longest-serving secretary of state in U.S. history. He won the Nobel Peace Prize in 1945 for his role in founding the United Nations. So he has a strong claim to being the father of both the federal income tax and the United Nations, which would make him more popular in some circles than in others.

I spend some time in the book, with the benefit of a century’s worth of hindsight, criticizing him for having screwed up some things. In particular, it seems incredible that he seems to have never have thought about the taxation of capital gains. People would ask him, “How would your income tax treat capital gains,” and he gave a different answer every time.

So one can be critical, but he did a good enough job that when four years later the country needed a whole bunch of new revenue to finance participation in the Great War, the income tax was pressed into service for that purpose and it worked. And after that, it became the major revenue source for the federal government and has remained that for a more than a century. The acorn Hull planted in 1913 has grown into, for better or worse, the oak we have today.

DLM: You note that in the beginning, exemption levels were high and tax rates were low.

LZ: Hull was up front about the fact that the tax would start on a small scale to get the technical stuff right while there weren’t a whole lot of taxpayers and  tax dollars involved. To paraphrase, he said, “Once we get it right, based on experimentation with a small percentage of the population and the low rate of tax, we can gradually lower the exemption levels and increase the rates.” He foresaw, in 1913, that this would become the major federal revenue source eventually. I don’t think a lot of other people shared his vision, but it turned out that he was absolutely right. And to some extent, it happened faster than anyone expected because of the war. The top rate in 1913 was 7 percent. By the middle of the war, the top rate was 77 percent.

DLM: Hull favored a flat tax, but the tax enacted was progressive. How has that original choice played out?

LZ: Hull’s main concern was trying to keep the tax really simple at the beginning so that it would be easy to administer, and he thought that the progressive rates would not work well with withholding. The 1913 tax had withholding, and he was absolutely right, it turned out to be kind of a disaster. By 1917 Congress ended up repealing withholding and going with just information reporting.  WWII brought withholding back and it’s been with us ever since. So that the irony is that WWI killed withholding and then WWII brought it back.

DLM: What problem was corrected by making the income tax “tax-inclusive,” as happened in 1917?

LZ: In 1913, Congress didn’t even think about whether the income tax should be deductible against itself — whether you should be able to decrease the amount of income subject to tax by the amount that you pay as federal income tax. But they wrote a rule which, taken literally, allowed that deduction. That doesn’t matter much when the rate of the tax for most of the people who are subject to it is just 1 percent. It matters hugely if the top tax rate is 77 percent. So finally, in 1917, they focused just on this question, basically because they had to. If they had continued to allow this deduction, the only way they could have raised the amount of revenue they wanted to raise would have been with tax rates over 200 percent — which would have been a political problem, right?

When World War I and the need for much more revenue forced them to focus on the issue, they finally paid attention to it and got it right, but there were a lot of strident complaints about it: If you don’t allow the deduction, then it’s a tax on a tax — which in a way is true, but I’m not sure what conclusion can be legitimately drawn from that. This is a short chapter where the story is completely told in four years.

DLM: How did a newspaper column help shape the early tax law?

LZ: In the process of researching the book, I stumbled across this Wall Street Journal column called “Answers to Inquirers,” which had started out a decade before the enactment of the income tax as a column for asking questions about investment strategies. But when the income tax was enacted, this column started getting a lot of questions from ordinary taxpayers. Of course, to be subject to the tax at all, you had to be, certainly, within the top 5 percent of the income distribution, so let’s put it this way: they were ordinary readers of the Wall Street Journal.

Every way that the tax impacted ordinary affluent individuals is reflected in that column over about a decade. One thing I found especially intriguing was that there were a number of instances in which Congress or Treasury came up with rules that didn’t make good sense, and these ordinary taxpayers write to the Wall Street Journal saying, “I don’t understand this rule, it’s crazy,” and they are absolutely right yet Congress and Treasury don’t get that it’s crazy. There were a lot of instances of that.

Probably the best instance where people were writing into the Journal saying, ‘this is crazy’ where Congress in fact finally realized it was and fixed it, was the rule that was in effect from 1913 to 1921 that if you owned, say, appreciated stock, and gave it to a relative, including a spouse, and had the relative sell the property, neither you nor the relative would be taxed on the gain. So all you had to do to avoid tax on the sale of stock or real estate was to make a gift of it to a relative and have the relative sell it. That’s obviously a very pro taxpayer rule. Nonetheless, a lot of people wrote into the Journal, saying, “Is this really the rule? It makes no sense.” And in 1921, Congress fixed it.

DLM: Why did some early errors get corrected while others remained?

LZ: The short version is pretty simple: Errors tended not to be corrected if two things were true. One: if they were taxpayer-favorable errors that developed constituencies. A classic example of that is the charitable deduction for unrealized appreciation of art and stock. The big constituencies are art museums and universities and their wealthy donors. But that’s only one part of the two-part requirement for the error to persist. The second is that, in revenue terms, the error is small enough that the federal government can afford to live with it.

I’ll give you two errors that were so expensive that they had to be corrected. One was the tax-exclusive income tax — allowing the tax to be deductible against itself. It had to be corrected because you couldn’t raise the amount of revenue that you needed to raise to carry on World War I without fixing that. The other, and maybe even better example, is the contrast between the two tax-free step-up in basis rules. To have continued to allow the tax-free step-up in basis for inter vivos gifts would have been the functional equivalent of repealing the capital gains tax, and Congress decided it couldn’t afford that. But the revenue impact of the tax-free step-up in basis at death, although very significant, wasn’t of the same magnitude, because you could take advantage of it only once, when you died. And so Congress could afford to continue that, and sure enough, it did.

DLM: What lasting lesson can be drawn from the collection of errors and dubious choices you found in the early history of the federal income tax?

LZ: Going forward, the most obvious lesson probably has more application to other areas of the law than to the income tax itself. That is: When you are developing a big, important, new law from scratch — and the moral is easier to state than to follow in practice — you cannot be too careful to get it right the first time, because mistakes may develop constituencies and may become hard to fix for that reason. If you don’t get it right the first time, you may never be able to fix it, or it may even result in torpedoing the whole law. I think we’ve seen some illustrations of that lesson in the history of Obamacare.