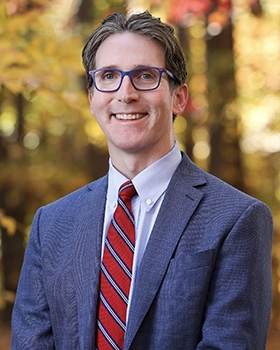 A recommendation by Professor Michael Frakes to strategically add resources to the U.S. Patent and Trademark Office (PTO) is gaining traction among policymakers debating how to cut the cost of pharmaceutical drugs.

According to Frakes, the A. Kenneth Pye Professor of Law and professor of economics, investing just $20 million to give examiners more time to review applications for secondary patents on pharmaceutical drugs would reduce the number of invalid patents they approve, saving some $32 million in avoided litigation expenses and leading to several billion dollars per year in cost savings from the accelerated entry of generic drugs into the market.

Frakes and Melissa Wasserman make that recommendation in Investing in Ex Ante Regulation: Evidence from Pharmaceutical Patent Examination, forthcoming in American Economic Journal: Economic Policy, in which they analyze the effect of time constraints on pharmaceutical patent reviews, particularly for secondary patents on peripheral drug features, and the costs of invalid patents caused by poor quality examinations. Wasserman, Frakes’ frequent collaborator on PTO scholarship, is the Charles Tilford McCormick Professor of Law at The University of Texas at Austin School of Law.

By spending $20 million to give examiners 50% more time to review secondary drug patent applications, the PTO could avoid $32 million in administrative costs associated with downstream litigation, Frakes and Wasserman write in the working paper. Further, they estimate that the aggregate accelerated entry of generic drugs stemming from examiners’ increased scrutiny would result in consumer savings of between $2.53 and $5.28 billion per year from lower prices and increased access to drugs.

“Of the areas where you probably would get more bang for the buck in investing in examiner resources, this is where the kind of invalid patents being issued could arguably do the most damage,” says Frakes, a law and economics scholar and legal empiricist who works primarily on health law and innovation policy. “The patents are more valuable and therefore the bad ones can potentially do more harm. The returns can be huge by spending a little more and really scrutinizing these patents.”

The paper by Frakes and Wasserman is the latest in a body of empirical scholarship examining the determinants of decision-making within the PTO and patent system that reveals structural inefficiencies, time pressures, and perverse incentives within the agency.

Their work has been cited by patent reform advocates and lawmakers who say the pharmaceutical industry exploits the weaknesses of the U.S. patent system to extend the patent life of brand name drugs and keep their monopolies on high-priced drugs by preventing lower-cost generics and biosimilars from entering the market.

Those strategies include creating a “patent thicket” of secondary patents on minor features such as new flavors or methods of administration. Many are invalid patents that do not meet legal patentability requirements such as novelty and non-obviousness but allow patent holders to retain market exclusivity by extending the original 20-year patent term, delaying the availability of generics. That costs consumers and Medicare, which is prohibited by law from negotiating drug prices, billions of dollars.

“Giving examiners more time is one of the more obvious places to invest in the patent office, because at its core what examiners are doing is a search-based task, and searches take time. So it’s a natural place to look in terms of a policy tool, and it’s one that we could get empirical traction on,” Frakes says.

“The folks in D.C. have been interested in our suggestions, so it’s also been one that’s been politically tractable.”

A targeted way to move toward lower drug prices

How do so many weak patents get through the patent office? Frakes’ scholarship points to multiple causes, including a crushing backlog of work. More than 23,000 applications for secondary drug patents come through the PTO each year. Examiners spend an average of 19 hours reviewing applications, with time allotted varying by examiners’ career level and complexity of the field in which they work, according to Frakes and Wasserman.

In their 2017 paper Is the Time Allocated to Review Patent Applications Inducing Examiners to Grant Invalid Patents? Evidence from Microlevel Application Data, The Review of Economics and Statistics 99 (3), they establish that as examiners were promoted to higher pay grades and given less time to review applications, examination scrutiny suffered and they granted patents at a higher rate. Further, those patents were less likely to be valid and more subject to challenge.

“[L]enient examiners are more likely, on average, to issue patents with markers suggestive of weaker underlying validity and that are more likely to attract litigation,” Frakes and Wasserman write in Do Patent Lawsuits Target Invalid Patents? in Selection and Decision in Judicial Process around the World: Empirical Inquires (Yun-chien Chang ed., Cambridge University Press 2019). “Ultimately, our findings suggest that legally invalid patents issued by the U.S. Patent Office are substantially more likely to be the target of litigation relative to legally valid patents.” In their forthcoming paper they quantify the cost of that litigation to the PTO.

Frakes recognizes that some secondary patents do add value, such as a new formulation that could reduce side effects and improve drug adherence. And he acknowledges the criticism that removing some of the profit incentive could impact innovation by the pharmaceutical industry. His work, he says, offers a pathway toward lowering the cost of pharmaceuticals that is less painful to the industry than price caps, and nudges the patent system toward recognizing real innovation.

“To the extent that we have some sort of policy commitment to lowering drug prices, we just want our analysis to suggest one potential way that one could go about doing so, of leaning toward accelerated generic entry and lower drug prices,” he says.

“We want to focus the power of patent protection on those things where there truly is some sort of leap forward, where we’re getting real benefits. So we’re trying to target the revenue hits to pharmaceutical companies in areas where they’re ostensibly being less innovative. We’re just suggesting giving examiners more resources to screen the innovative from the non-innovative.”

In a 2017 policy proposal for Brookings, Decreasing the Patent Office’s Incentives to Grant Invalid Patents, Frakes and Wasserman recommended two other PTO reforms in addition to increasing examination times: capping repeat applications and changing the PTO’s fee structure. Currently, rejected applicants may file an unlimited number of repeat patent applications; such filings make up some 40% of the PTO’s backlog, they found.

And under the current system, the PTO’s revenue comes almost entirely from user fees: examination fees, which bring in less than half of its revenue, and issuance fees and renewal fees, which are only generated when the agency grants a patent. That dependence on post-allowance fees incentivizes the agency to grant more patents when its budget fails to cover operational expenses, Frakes and Wasserman argued in The Failed Promise of User Fees: Empirical Evidence from the U.S. Patent and Trademark Office, Journal of Empirical Legal Studies, Vol. 11, Issue 4, pp. 602-636 (2014), in which they recommend eliminating issuance fees and raising application fees.

“Most of our conversations in D.C. recently have been on time allocation, but it was helpful to be involved with Brookings and start the conversation about fee reform as well,” Frakes says. “We still feel strongly about that. We’ve been trying to approach the patent office both from the bottom, from the examiner perspective, and from the top, from the agency head perspective.”

Frakes and Wasserman have two papers in progress on the patent system. One will analyze how changes to PTO performance appraisal procedures affect examiner behavior and work quality. A second will provide empirical data on whether patent assertion entities — “patent trolls” — that acquire patents for the purpose of suing infringers, are more attracted to patents with markers of weaker validity.

Frakes also recently won renewal of a multi-year National Institutes of Health grant to continue his research with Jonathan Gruber, the Ford Professor of Economics at the Massachusetts Institute of Technology, on health policy using data from the military health system. Their earlier work funded by the NIH addresses questions such as whether medical malpractice liability incentivizes physicians to practice defensive medicine, and their paper Defensive Medicine: Evidence from Military Immunity, American Economic Journal: Economic Policy, 11 (3): 197-231, was a finalist for the 2020 NIHCH Foundation Research Award.