Danielle French discusses her path to ROTC and battalion leadership, and her aspirations for a career as a military lawyer. 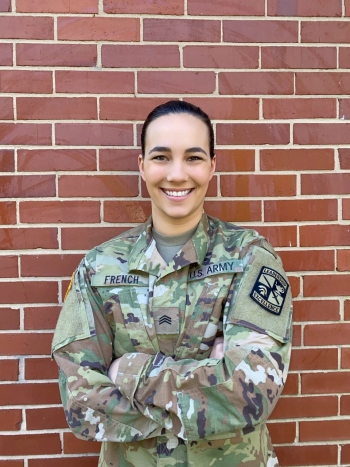 “I’m very honored to have gotten this role,” French said. “It wasn’t something that I could necessarily seek out. I just tried to be the best that I could be in the battalion. There’s a lot of great cadets in the program and I am excited to get the opportunity to lead such a phenomenal group.”

Maj. Gen. Charles J. Dunlap, Jr., a professor of the practice of law and executive director of the law school’s Center on Law, Ethics and National Security, called French an ideal pick for the command.

“Not only is she super-smart and hard-working, she’s a gifted leader,” said Dunlap, the former deputy judge advocate general of the U.S. Air Force. “Over my more than 34 years of service, I’ve seen thousands of young officers, and I’d put Danielle among the very best.  This is a win-win.” Dunlap noted that French was superb over the past two years in her leadership of the LENS Scholars Program that facilitates professional networking at the center’s annual conference for students from law schools across the U.S. who aspire to careers in national security law.

A South Carolina native earning her second degree at Duke — she earned her BA in 2018 as a political science and religious studies major — French joined the university’s Army ROTC midway through her senior year. She started doing physical training with the battalion, finding that she enjoyed it, and committed to the ROTC program after she received her acceptance to Duke Law.

“I have always wanted to practice law, but with the desire to apply this passion to public service,” she said. “I have also always sought purpose, drive and direction towards a greater cause in my life. So when I found out that I got into Duke Law, I kind of thought about joining. It’d always been in the back of my head, that military aspect of life.”

French’s decision was also informed by her husband’s military experience. A six-year U.S. Army veteran, Paul French has a son in the U.S. Marines, and his father, grandfather, and great-grandfather all served in the U.S. Navy. The two met at Duke — Paul is an IT analyst for Duke Health — and married in 2017.

“Paul was actually more hesitant than me when I first wanted to go in because while he loves it, he also understands the unique difficulties of the military,” she said. And both knew that taking on ROTC while starting law school would be challenging.

“At first the most difficult and interesting time was doing PT in the morning,” French said. “I was doing physical training from 6 a.m. to 7 a.m. and trying to get to Professor [James] Coleman’s criminal law class at 8:05 a.m. Monday through Thursday in the spring of my 1L year.” Juggling the demands on her time remains a challenge.

“I would be lying if I said it was always easy,” she said. “But time management, self-care, and a love for both parts of what I do always keep me going.”

French says wearing Army fatigues to her classes is a point of pride with her and a connection with a rising 2L who’s also in ROTC and often wears his fatigues on the same days.

“It’s always nice to see the same uniform in the hallways,” she said. “I can usually help him with whatever he needs as far as ROTC and law school, and balancing that.”

The uniform is a visual nod to her professional aspirations to commission as a member of the Judge Advocate General’s Corps — a JAG officer — after she graduates. Her studies and service at Duke are a helpful step in that direction and she will begin the application process in late summer.

Having worked on personal injury, business litigation, and pro bono matters at Everett Gaskins Hancock in Raleigh after her first year, French is spending her 2L summer in the U.S. Attorney’s Office for the Eastern District of North Carolina. She hopes to deepen her practice skills in the fall semester in the Immigrant Rights Clinic.

Criminal law and litigation skills are particularly relevant to her JAG Corps aspirations, French said. “In the JAG program you’re getting a very wide range of law and you’re getting thrown into the deep end very quickly. You might be a first chair on a trial within your first year, which is something that a lot of first-year associates don’t get to experience.”

As incoming battalion commander, French is preparing for changes to the ROTC program brought on the coronavirus pandemic. Health concerns forced the cancellation of this summer’s six-week cadet training at Fort Knox in Kentucky, as well as a training program at the U.S. Army Airborne School at Fort Benning, Ga., where French was granted a rare spot.

“We’re already missing out on a lot of really important training,” she said. But she remains hopeful that cadets will be able to return to campus in the fall semester for labs, physical training, and field training exercises. “We are working hard to adjust to new university and state guidance and I am confident that we will still be able to produce excellent officers in the safest way possible,” French said.