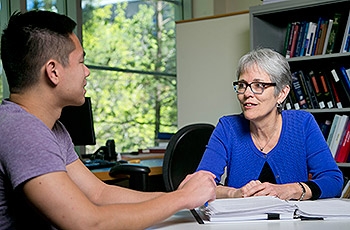 Students and faculty in the HIV Policy Clinic work on a wide range of issues directly related to the ability of people living with HIV to get access to care and treatment.

For Jerry Fang ’15, who spent two semesters in the clinic (formerly known as the AIDS Policy Clinic), that has meant everything from investigating the way HIV is criminalized in North Carolina and nationally to collecting stories from people living with HIV in the Deep South to bolster advocacy for renewal of the federal Ryan White HIV/AIDS Program that supports essential services not covered by the Affordable Care Act (ACA). He also crafted a white paper that was submitted to the Centers for Disease Control and Prevention (CDC) opposing its policy of directing HIV-prevention funding to only a limited number of large urban areas.

“The HIV prevalence in the South is not located in the bigger cities, but in rural areas and smaller urban areas like Durham,” said Fang, who worked in HIV prevention in Los Angeles prior to attending Duke Law. “The white paper focuses on how the CDC policy is squeezing funding of prevention initiatives in the South and will create greater problems in the future.” He joined Clinical Professor Carolyn McAllaster, who directs the clinic, at a meeting in Atlanta with the CDC’s director of HIV and AIDS prevention to discuss the policy proposals.

“People at the CDC read the report and said they were struck by certain things in it that they had not previously known. That’s very gratifying,” Fang said. “What this clinic work offers that a lot of classroom work can’t, is a direct connection to real-life effects of policy and law.”

Fang’s work is directly supported by a $200,000 grant to the HIV Policy Clinic from the Ford Foundation, which has recently granted the clinic another $350,000. Other philanthropic organizations have also renewed their support.

The policy clinic is sharing a $100,000 collaborative grant from the Elton John AIDS Foundation with the Harvard Center for Health Law and Policy and the Southern AIDS Coalition to work with partner in nine Southern states to improve access to health coverage, care, and services for people living with HIV. Activities supported by the grant are designed to increase access to meaningful health coverage under the ACA; educate state and federal policymakers about the needs of people living with HIV and the benefits of fully implementing the ACA, including Medicaid expansion; and advocating for the South to receive resources proportional to its share of the HIV epidemic, where transmission and death rates are relatively high.

A $75,000 AIDS United: Southern REACH grant is focused on reducing barriers to HIV care and treatment in North Carolina, funding work on access to care through the AIDS Drug Assistance Program and the ACA marketplace insurance plans, and presenting  HIV stigma and confidentiality education for legal and medical administrators. “As part of this work, we analyze the cost, provider networks, and drug formularies of the marketplace insurance plans, and provide guidance to HIV-positive North Carolinians and their providers about enrollment in market- place insurance,” said McAllaster.

The Deep South region has become the epicenter of the U.S. HIV epidemic, she said. Nine states — Alabama, Florida, Georgia, Louisiana, Mississippi, North and South Carolina, Tennessee, and Texas — account for nearly 40 percent of national HIV diagnoses  despite having only 28 percent of the total U.S. population. The region also has lower survival rates and higher death rates among people diagnosed with HIV.

The latest round of Ford Foundation funding will be used to continue research documenting the high HIV burden in the Deep South, as well as for advocacy supporting a prevention strategy for the region, McAllaster said. The clinic will continue to research the existing prevention and care infra- structure and community characteristics of the HIV epidemic in the Deep South states, and will conduct research to examine the impact of stigma as a driver of the HIV epidemic in the South. Other goals include working to help inform the revision of the White House National HIV/AIDS Strategy and supporting state-based advocacy efforts by creating materials for southern advocates.

“The goal of the HIV Policy Clinic is to focus national attention and resources on the Deep South, where HIV diagnosis rates are highest and more people are living and dying with HIV,” said McAllaster.