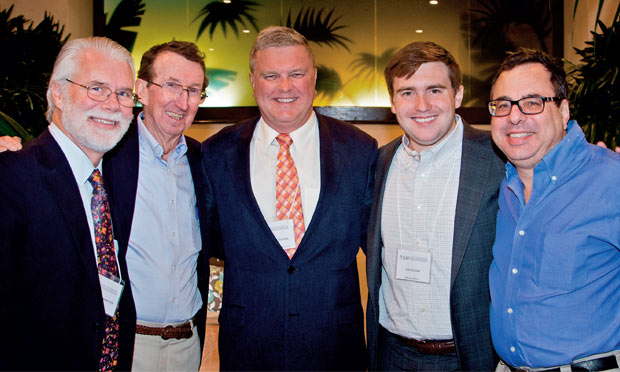 The work of Professor James Cox was celebrated at the 22nd annual symposium of the Institute for Law & Economic Policy (ILEP) in Miami on April 8 and 9. Titled “Vindicating the Virtuous Shareholder,” the event covered a range of issues, from private enforcement to regulatory changes affecting investor protection, many of which are ref lected in Cox’s seminal body of scholarship over the past 40 years.

Many panelists and presenters at the symposium, which was co-sponsored by the Duke Law Journal, were colleagues, co-authors, or students of Cox, the Brainerd Currie Professor of Law, who joined the Duke faculty in 1979. A renowned scholar of corporate and securities law, he is the author of the award-winning Cox and Hazen on Corporations, among other books, and has testified before Congress on such matters as insider trading and market reform.

In their keynote presentation titled “James Cox: The Shareholder’s Best Advocate,” Vanderbilt University Professor of Law and Business Randall Thomas and Professor Harwell Wells of Temple Law School used 11 of his articles to trace the development of modern corporate law. Thomas, a frequent Cox collaborator, said his colleague’s prodigious scholarly output of three articles a year on average is notable for its quality and “profound” impact. Cox first championed shareholder interests against pro-market and pro-corporate legal theories in the 1980s and ’90s, and then continued to do so against external forces such as corporate globalization, corporate scandals, and the financial crisis, consistently offering fresh approaches to understanding modern corporations, said Thomas.

Wells called Cox’s 1985 article “Bias in the Boardroom” a particularly striking work. “It shows his deep respect for doctrine and statutory precedent, and at the same time his willingness to explore law in innovative ways, in this case drawing on concepts from psychology,” he said. The article, co-authored with psychologist and lawyer Harry Munsinger ’84, uses psychological research to uncover what the authors describe as the “subtle but powerful” biases that prevented even an independent, non-executive director from monitoring the behavior of corporate directors and representing the interests of that company’s shareholders.

In his overall body of work, Cox demonstrates evolving yet steadfast support for shareholders, Thomas concluded. “In this age of ‘piecemeal’ legal scholarship, Cox has addressed critical problems — diverse in scope, and international in nature — tackling normative issues with empirical analysis. Cox has moved the needle in corporate law scholarship — away from contractarianism and toward a more open-ended paradigm.”

Another symposium participant, Lawrence Baxter, Duke’s William B. McGuire Professor of the Practice of Law, bounced ideas off Cox while developing his presentation, in which he proposed taking advantage of the extensive automated reporting currently required in banking to develop a highly sophisticated regulatory technology, or “Reg-Tech.”

“Jim likes the overall concept,” said Baxter. “But he is definitely not afraid to disagree and criticize. I love that. With Jim, it’s always a true scholarly debate.” Baxter, who has taught with Cox in the Duke in D.C. program, said a visit to the headquarters of the U.S. Securities and Exchange Commission served as confirmation — if any was needed — of his colleague’s stature in his field. “The regulators came out of their offices and into the hallway just wanting to meet him and shake his hand,” said Baxter.

Cox presented a forthcoming article titled “The Resurrection of the Derivative Suit” at the symposium and took part in a panel discussion on recent developments in securities class actions, including the Supreme Court’s 2015 ruling in Omnicare, Inc. v. Laborers District Council Construction Industry Pension Fund.

Celebrating a teacher and colleague While the symposium focused on his scholarship, many participants commented on his influence as a teacher. “I had him for Business Organization,” said Michael Krimminger ’82, a partner with Cleary Gottlieb in Washington, D.C., and former general counsel of the Federal Deposit Insurance Corporation. “To this day I have the outline for his class on my office shelf. It’s my security blanket.”

Krimminger, who took part on a panel titled “Private Suits while the Regulator Slumbers,” said Cox has “maintained a focus on the real world throughout his career — something often overlooked in academia.”

DLJ Editor-in-Chief Ace Factor ’17, who recently completed Cox’s Business Associations course, attended the symposium as an observer. “He is a fantastic storyteller,” Factor said. “He really animates the characters in these dense cases and makes corporate law exciting. There are 120 students in the class and we all hang on his every word.” Cox is the only Duke Law faculty member to have received the Duke Bar Association’s Distinguished Teaching Award three times.

Since joining the Duke Law faculty in 1979, Professor James Cox has taught about 7,000 students. That is almost two-thirds of the Law School’s total number of students since it was founded in 1930. His Business Associations course was described on one student evaluation as “a comedy club and a PBS news program rolled into one.”

Delaware Court of Chancery Vice Chancellor Sam Glasscock ’83 said he never took Cox’s legendary Business Associations course, but described interacting with him outside of class as “one of the great pleasures of law school.” He said he has enjoyed seeing Cox frequently at professional conferences where “we always talk about fiduciary duty,” and appreciates the insight the venerable scholar brings to the work of the Chancery Court.

“At the Chancery Court, we put out the raw material that fuels the work Professor Cox does,” said Glasscock. “The court’s work is reviewed by academicians, who respond to it in scholarly articles, and then it comes back to us — either we read the articles, or they’re read by practitioners and included in briefs. There’s a real exchange between academics and judges that you don’t see in other areas of the law. It’s exciting. We’re making common law. It’s great to have my work reviewed at such a high level by good academics like Professor Cox.”

Speaking at the symposium’s closing banquet, Dean David F. Levi lauded Cox as an accomplished scholar with strong quantitative skills, an exceptional understanding of markets and securities law, who commands influence among academics, judges, regulators, and lawyers. “Add to this an inquiring, nimble mind and an incredible work ethic, and you have one of the foremost scholars of our time,” Levi said. He also praised Cox as a “marvelous University and Law School citizen” who takes on tough problems, “whether it is mentoring a junior colleague who needs help or designing responsible investment policies for the University.”

Calling Cox “the greatest teacher in the history of Duke Law School” (and backing up the claim with student evaluations), Levi said Cox goes above and beyond his role in the classroom. “He is a mentor, career counselor, and friend in time of trouble. They know they can count on him.

“[I]t is in the interaction with his Law School colleagues and his students where Jim particularly shines and has made the critical difference in the lives of others,” Levi said. “His natural curiosity and gregariousness, his enthusiasm for learning and helping are such that he eagerly participates in the work of others, whether students or faculty, offering insights in a spirit of mutual inquiry.”