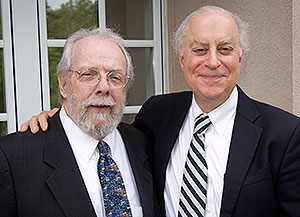 Colleagues, former students, friends, and family gathered at the Washington Duke Inn on May 1 to honor David L. Lange, the Melvin G. Shimm Emeritus Professor of Law, who retired from teaching at the end of 2015 after 44 years on the Duke Law faculty.

“David’s writing on the public domain – indeed, his conception of the public domain – has been transformational in the intellectual property field,” said Dean David F. Levi. “And in the classroom, his teaching has had a similar transformative effect on his students, which is why there are so many alums here tonight. Many of them have told me that they owe everything to David.”

“I doubt that there is anything that could mean more to David than this scholarship, made up of the individual acts of generosity, gratitude, and loyalty by those who have so much admiration for him,” Levi said.

Donna Gregg ’74 was one of several former students who praised Lange as a teacher, scholar, and mentor.  After struggling to choose between law school and graduate school in media and telecommunications, she said she found a home in Lange’s classes. She landed a job after graduation at the Federal Communications Commission’s Cable Television Bureau and went on to a high-level positions in telecommunications law and policy as a practitioner, teacher, and public servant.

“I have to thank Professor Lange for my whole legal career,” said Gregg, a member of Duke Law’s Board of Visitors. “I learned, as many people did, that we could combine our passions for media and television and communications and intellectual property and being of service as lawyers in those fields.” 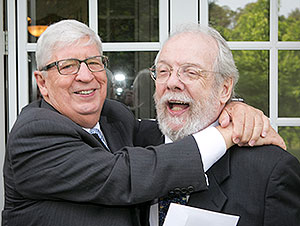 Sarah Vacchiano ’12, an attorney with FilmNation Entertainment in New York, said she made the decision to transfer to Duke after her 1L year in order to study with Lange and pursue a dream of becoming an entertainment lawyer. The two forged an “amazing mentorship and friendship” that guided Vacchiano through her legal education and first years of law practice, including a memorable project she still hopes to realize – creating a television show about starting at the bottom at a talent agency.

“He believed in me with zero experience – just an idea that I was so excited about – and he was just as excited about it as I was,” she said. “That’s what I take with me.”

Professor Kip Frey ’85 described Lange as an inspirational teacher who had an immeasurable impact on his students.

“We had never been as awestruck, ever, in hearing David speak and communicate and teach us,” Frey said. “The one thing that everyone will agree on who has had David [as a teacher] is that where they went in their lives and their careers would have been different had they not known David.”

Frey also announced that the annual endowed Kip and Meredith Frey Lecture in Intellectual Property will be renamed in Lange’s honor beginning this fall.

“There’s not a better friend that I’ve had over the years,” said Frey, who enjoyed a legal career in the entertainment industry before becoming an entrepreneur and venture capitalist and now directs Duke’s Law & Entrepreneurship Program. “For me, my entire experience at Duke Law and everything that has come afterward has been defined and animated by my relationship with David.”

Lange was also lauded by several of his longtime colleagues on the Duke Law faculty. Professor Jeff Powell praised Lange’s passion for and mastery of language as well as the “humanity” and “decency” in his treatment of colleagues and students. “Your retirement leaves a gap that we will never completely fill,” Powell said.

Professor Don Beskind ‘77 presented Lange with a gift from faculty and staff: a poster for the Marx Brothers’ “A Night in Casablanca” framed alongside pages referencing the movie from Lange’s seminal article, “Recognizing the Public Domain,” 44 Law and Contemporary Problems 147-178 (1981).

Lange, who came to Duke in 1971 after working in radio, television, and motion picture production, and as a practicing lawyer with an emphasis in media law, expressed gratitude and joy in reflecting on his career.

“I do not think I could have found a professional role more suited to my nature,” he said.