Senior Lecturing Fellow Charles R. Holton ’73, a partner with Womble Carlyle Sandridge & Rice in Research Triangle Park, was honored by the national Legal Services Corporation (LSC) Board of Directors for his volunteer work with Legal Aid of North Carolina (LANC) during an event held at Duke University on Oct. 1.

Holton, the vice chair and chair elect of the LANC Board of Directors, was recognized as a pro bono leader in the area of fair housing for low-income clients in central North Carolina.  He was one of five North Carolina lawyers recognized by the LSC board for their pro bono service.

Holton specializes in general business litigation, products liability, and professional negligence defense in his practice and is active in numerous public service and community projects.  At Duke Law he teaches Arbitration:  Law and Practice and coaches Duke’s Willem Vis International Moot Court Competition team.  He started volunteering his services with North-Central Legal Services in Durham shortly after his graduation from Duke Law and later served as an advisory board member for that organization before regional legal services merged under the LANC umbrella.  He now also co-chairs the Triangle Access to Justice Committee, LANC’s local fundraising arm as he continues to directly handle cases referred to him, serve as co-counsel with LANC attorneys on complex matters, and make his firm’s resources available as needed.

“I very much enjoy keeping my hand in doing cases and my service on the board and am certainly appreciative of this award,” he said.  “But there are many others who are more deserving, particularly the dedicated lawyers and staff who devote their time on a full-time basis to this work.  I’m happy to contribute some part of my time, but they have devoted their professional careers to this and are, by far, the ones most deserving of honor and respect.”

The award ceremony followed a daylong LSC forum on civil legal aid  at Duke, held in conjunction with a meeting of the LSC board of directors. Six distinguished Southeastern judges addressed the board members about the role of legal aid for the poor in safeguarding the fair administration of justice.  Harvard Law School Dean Martha Minow moderated the panel, which featured North Carolina Supreme Court Chief Justice Sarah Parker; Judge Allyson Duncan ’75 of the U.S. Court of Appeals for the Fourth Circuit; Chief Judge John C. Few of the South Carolina Court of Appeals; Justice S. Bernard Goodwyn of Virginia; Chief Justice Carol Hunstein of Georgia; and Chief Justice Menis Ketchum of West Virginia.

The LSC, which is chaired by John G. Levi, a partner at Sidley Austin in Chicago (and brother of Dean David F. Levi), is the single-largest funder of civil legal aid for low-income Americans, providing federal grants to 134 nonprofit legal aid organizations across the country.  These programs, like LANC, handle a range of civil matters ranging helping homeowners to avoid foreclosures to helping women and children to escape abusive relationships.

As noted by a new report from the LSC National Pro Bono Task Force, demand for civil legal assistance is at an all-time high, while resources are sharply down.  The Pro Bono Task Force, comprised of 60 leading lawyers, academics, and judges, was charged with finding new ways to engage members of the private bar in Legal Aid programs.  The full report, which was previewed at the Duke forum, can be found at www.lsc.gov.

In a commentary published in the News and Observer on Oct. 1, John Levi called the “chasm” between the legal needs of low-income people and the capacity of the civil legal assistance system to meet those needs a threat to the core American value of equal access to justice.

The challenge is acute in North Carolina, Holton confirmed, adding that a novel collaboration between LANC and the North Carolina Bar Association promises a measure of much-needed relief.  Initiated by LANC Executive Director George Hausen, the “Call 4All” program, which was featured at the Duke forum, encourages individual lawyers to commit to holding at least a one-hour phone consultation each month with a client in need of advice within their area of expertise.

“The lawyers have the option to limit their involvement to that consultation and, perhaps, to a follow up call, and then pass the matter back to Legal Aid, or to continue on with it themselves,” said Holton.  “In many cases, although they may not have initially been inclined to take the matter on, once they become a little bit invested, they do.”  To date, about 600 lawyers have signed up for the program statewide, he said. 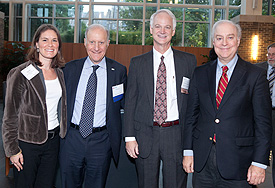