Scheinman, an angel investor and Zoom’s first investor, spoke with students in Duke’s Law and Entrepreneurship Program, sharing insights on advising, investing in, and growing emerging companies, and taking their questions relating to career development and satisfaction. 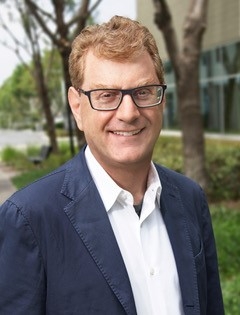 The COVID-19 pandemic has roiled financial markets, but one company in angel investor Dan Scheinman’s portfolio has seen stratospheric growth during the global COVID-19 shutdown: Zoom. “We had planned that video would run the world at some point. We didn’t plan for it to happen over a few months in 2020,” said Scheinman, who nine years ago wrote a check to Zoom founder Eric Yuan before even hearing his pitch for the videoconferencing platform.

Scheinman, a Silicon Valley native, became an investor in technology companies and a sought-after start-up advisor after practicing law and then serving in a range of leadership positions over 18 years at Cisco Systems. As general counsel, he pioneered the use of technology to reduce legal costs for the fast-growing company; as head of corporate development, he zeroed in on “emotional intelligence” — EQ — and the compatibility of the two teams as being a key to the success of mergers and acquisitions; and as head of an internal start-up, he learned a critical lesson: “I learned that what differentiates early success from failure is actually not the technology side. Software you can change — it's malleable. It's really can you figure out how to price and distribute your product to reach your customers in a cost-effective way?”

Scheinman spoke with students in Duke’s Law and Entrepreneurship Program on April 17, sharing insights on advising, investing in, and growing emerging companies and taking their questions relating to career development and satisfaction. Clinical Professor Erika Buell, the program’s director, led the conversation that was held — naturally — via Zoom. Excerpts follow.

My investing thesis as an angel investor in technology companies was that there were underserved niches in the market that offered investment opportunity. When I started in 2011, many large venture capital firms would base early investment decisions on “pattern recognition.” This meant they looked to seed-invest in certain types of entrepreneurs and markets. In practice, at that time, they tended to invest in 20-something-year-old graduates of a very narrow number of universities who had been at a very narrow amount of companies. And then they would compete over those people.

For me, I found that as an angel investor, I could not compete with those firms to invest in those kind of companies. To be successful, I needed to find an underserved niche in the market of seed-stage startups. In 2011, there was a bit of a bias against experienced founders.  Today, the market has really changed. Then, people who are over 35 in this valley had a really tough time raising the first round of capital — the “seed” round. It turned out, there were a lot of good business reasons to like older founders. First, they understood their go-to-market strategy and had existing customer relationships. They understood how they were going to reach their customer and they understood how to build what I call the reverse wedding cake, where the first layer is the smallest and then you build up to the bigger layers.

I invested in four “unicorns” — companies that have over a billion [dollar] valuation — and two that are well north of that, Zoom and Arista Networks, out of a relatively small portfolio. My report card on all this is that I’ve now been part of well north of $50 billion worth of value creation. It's all my own capital.

Because the market for older founders has become more saturated, I'm actually shifting and looking at female founders, where I'm hearing some of the same things I used to hear about older founders.

I delivered the first check to Zoom founder Eric Yuan. Eric Yuan had worked at Cisco as the vice president of engineering for video conferencing, joining when Cisco acquired the videoconferencing software company Webex. Eric began as an early engineer there and worked himself up to VP. And then he and I actually quit Cisco on the same day. A friend of mine said, “Hey, he's starting a business. Can I do an intro to your new email?”

On my drive to meet him, I did the fastest reference checks ever. I was hearing things like, “He’s the greatest person I've ever worked for, the greatest technical business mind ever.” By the time I got there, I was already convinced. I just wanted to be involved. So I actually wrote out a check and I handed it to him. And he said, “For both of our sakes, let me show you the presentation.” And what he showed was how he wanted to reinvent video to make it bigger, better, faster, stronger.

His whole thesis was, “I want to build a product people love.” He knew exactly how he was going to emerge from the primordial ooze. He said, “We are going to sell to education and we are going to sell to small and medium business, and then we are going to let the rest of the world come to us over time as they realize this is a better product. We're just going to execute better than anyone else.” I also was honored to join the board.

And so for the last nine years, we've been working together on building a world-changing software company. It's been an incredible experience to watch something come out of nothing. Obviously we've been in the news a lot recently. We are now seeing the daily meeting participants on par with daily usage of some consumer internet companies. The amazing thing to me is that the service just works, even under the volume loads we have seen.

As a company of course we are not perfect. We have run into a wave of issues relating to our popularity.  Honestly, I have never seen a company be more transparent or move faster to fix issues than Zoom has.  We are constantly updating the software to offer a more secure experience.

On the financing side, Eric never struck the hardest bargains, which was incredibly smart: We took lower valuations than the market would bear in order that no investor would be unhappy. It meant that those investors have been great partners both on the terms of the investment and in the level of effort they put in to help the company.

I loved law school and I love the training I received in law school. There were just incredible teachers who actually cared about their students and spent time with their students. That has stuck with me forever.

In terms of specific legal training, I think in the beginning it actually focused me too narrowly on risk in a too narrow way. The focus on risk is actually really important, but you have to see risk in a broader context. As an investor, my biggest risk is missing out on the next Zoom. There is no risk in the terms greater than missing a good company. And once I understood that, actually I find the kind of rigorous analytical thinking learned during my time at the Law School is similar to how engineers think. That helps me to have a common way to analyze problems along with founders.

The single most important factor in investing in new technology companies is figuring out which are the smart risks to take and then eliminating the companies with poor risks. And developing a clear filter for that is super-important. So I found the law school training to be incredibly useful. But I also found that having my own sense of ambition and not limiting myself — thinking bigger — helped propel me to bigger outcomes.

Lawyers are core to successful company-building. The entrepreneurial journey is a bit like building a railroad. You're just laying track and you're hoping that you don't hit a bend in the road and you can keep laying the track. But the best lawyers in the world would say, “You're going to hit a bend in the road,” and can articulate it in a way that doesn't cause friction. Being able to articulate those things in the nicest possible way is a useful skill among the successful lawyers out here.

I'm a huge believer in the whole EQ thing. High IQ is great, but without people skills, it does not mean much. My personal strength is more on the EQ side. That's what helps me to be able to read a room. If you have those skills, it is a great building block for success.

In terms of assessing a company’s chance of success, and this is my personal opinion, the things that matter most for the early investor are the founder and the go-to-market strategy. Getting over-worried about whether a segment is too big or too small is the wrong thing early on. The question is: Can the early, small, entry market become that much bigger? And if you have a great founder who understands how to get a product into the hands of customers in a certain space, worrying about everything else, at the early stage, is too much worry. So I try to focus on what I think is most important.

I like technical founders who understand their first set of customers. That's where value gets created. Another huge risk early on is whether the founders know each other and like each other. One of the problems in young teams is the founders really don't know each other. And then what will you have what we call founder drama, where there is huge conflict between the founders learning to work together. And that is one of the most debilitating things to start-up companies on the planet.

Another reason companies fail, apart from founder drama, has been incredibly smart founders who could not find customers. So figuring out, “Is your founder able to sell? Do they understand where their first customer is going to come from? How does it work?” Engineering, particularly, produces a lot of introverts. So do you have someone who is willing to spend time with customers and who will learn how the sales process works?

And if I find a technical founder who can sell, that's where you have to basically back up the Brinks truck. My regret in Zoom was, I knew that Eric was one of those type of founders. I mean, literally I'm writing the guy a check. I should've written it for double.

My advice to young lawyers: Be strategic about where you want to go. Every year sit down and say, “Is being at this law firm getting me closer to where I want to go or not? How can I use being here to get the skills I need for whatever's next?” You always need to understand what your long term career goal is and then figure out the tactics to get there.

Maintain your network of people. Listen as much as you talk. And always ask open-ended questions about people's career strategy. I was always strategic. I was always trying to say, “What do I want to do? And then how do I end up there?” At the law firm I looked around and said, “Okay, if I'm going to be a general counsel, how do I act? How do I learn from this? What do I need to take from this law firm to do that?” When I was at Cisco, I said, “If I'm going to be a VC at some point, who would I fund? Who would I hire? Who would I not fund? Who wouldn't I touch?” And I was always kind of thinking forward, always.

One thing I know for sure is you're going to have an incredible network coming out of Duke because the people I went to law school with are just incredible.