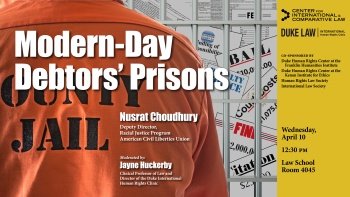 Nusrat Choudhury, Deputy Director of the Racial Justice Program at the American Civil Liberties Union, will discuss how court-imposed debts punish people for being poor.

The event is free and open to all, no registration required. Lunch will be provided. For more information, please contact Balfour Smith at bsmith@law.duke.edu.

Nusrat Choudhury is the deputy director of the ACLU Racial Justice Program, which is dedicated to advancing opportunity and equality for communities of color in the United States by fighting white supremacy and drivers of inequality in education, housing, the economy, and the criminal legal system. She leads litigation and advocacy challenging police racial profiling and “debtors’ prisons”—the illegal arrest and jailing of people unable to pay money to courts.

Ms. Choudhury’s litigation and advocacy against debtors’ prisons has exposed and reformed practices in Georgia, Mississippi, Washington, and South Carolina, and has led to the development of national guidance promoting the fair and equal treatment of rich and poor in courts. She has advocated against racial profiling and unlawful stop-and-frisk practices in numerous cities, including through Collins v. The City of Milwaukee, a federal lawsuit that resulted in a landmark 2018 court-ordered settlement agreement requiring sweeping reforms.