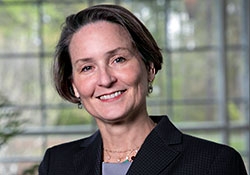 In the approach to the late September deadline for reauthorization of the federal farm bill, Clinical Professor Michelle Nowlin JD/MA ’92 and students in her food law and policy course studied ways to improve social and environmental justice in the food and agriculture sector that is governed by the omnibus legislation.

Nowlin, the supervising attorney in the Environmental Law and Policy Clinic, has led the Law School’s engagement, since 2016, with the Farm Bill Law Enterprise (FBLE), a consortium of food, agriculture, and environmental law programs at six universities seeking to improve food and agriculture policy. Faculty and students in each program — including those at Harvard, Yale, Vermont, Pace, and UCLA in addition to Duke — collaboratively analyzed each component of the Agriculture Act of 2014, the previous farm bill, developing proposals designed to facilitate the goals of environmental and agricultural sustainability, food security, and income security for all farmers. FBLE released three reports in March, titled Diversified Agricultural Economies, Food Access, Nutrition and Public Health, and Productivity and Risk Management, in advance of the April release of draft bills by the U.S. House of Representatives and Senate in April.

“The farm bill has a tremendous impact on the quality of our environment and the fairness of the nation’s agricultural sector,” said Nowlin, who spoke about equity in the Farm Bill at a Duke in DC “Beyond Talking Points” seminar last May, which was attended by congressional staff. “In these reports, we’ve identified a small number of realistic and cost-effective measures that will harness this legislation’s potential and promote a more sustainable — and equitable — future for our agricultural economy.

Key recommendations in the three reports include: Reducing barriers to grant and loan programs for small agricultural producers and beginning farmers and ranchers; using technology to improve access and efficiency of the Supplemental Nutrition Assistance Program (SNAP); and funding robust enforcement and technical assistance for conservation compliance standards established in the Farm Bill.

Nowlin’s contributions focused on identifying and redressing longstanding agricultural policies that disadvantage farmers of color. She and her students made specific proposals for addressing the challenge of heirs’ property, which complicates the ownership of land passed through generations without wills and deprives farmers who lack clear property title of critical benefits from federal and state agricultural programs or might even force partition sales of farmland. To remedy the problem, which is especially common among African-American farmers whose families may have historically lacked access to estate planning services — and Native American farmers who face a similar problem known as “fractionation” — the relevant FBLE report recommends specific actions, including allocating resources to the Farm Service Agency (FSA) for estate planning and disseminating information about consolidating rights.

Other FBLE recommendations to improve racial equity in the food and agriculture sector include mandating equal access to credit for socially disadvantaged and beginning farmers and ranchers, improving outreach to minority farmers to encourage their participation in USDA programs, promoting racial and gender diversity on FSA committees, promoting land transfers to beginning and socially disadvantaged farmers, and improving access to lending and discrimination data.

In addition to Nowlin, former clinic Stanback Fellow Emily Spiegel ’14 (now an assistant professor of law at Vermont Law School), and Zach Lankford ’18 contributed research and recommendations to the FBLE project pertaining to equitable and economically sustainable farming to the initiative. And last fall, three students in Nowlin’s Food, Agriculture, and the Environment class, Jenny Lee ’19, Sarah Schanz ’18, and Shajui Hossain ’18, conducted research into transparency and accountability in the allocation of resources in programs established and funded through the farm bill that will be incorporated into a forthcoming FBLE report proposing reforms to USDA administration and procedures. They discussed their research, last November, at the Food Law Student Leadership Summit at UCLA.

Beyond Duke Law School’s contributions to FBLE, students in the Environmental Law and Policy Clinic analyzed the impact of policies in the Agriculture Act of 2014 on small- and medium-scale farms in North and South Carolina for its client, the Carolina Farm Stewardship Association (CFSA). They found that smaller farms receive far fewer subsidy dollars per acre than large-scale operations; the smallest farms received an average of $6.75 per acre, while the largest farms made an average of $30.66 per acre. The students translated their findings into infographics that CFSA used to educate legislators ahead of votes on draft farm bills.