Professor Arti K. Rai is the second member of the Duke Law School faculty to be asked to serve in the administration of President Joe Biden. 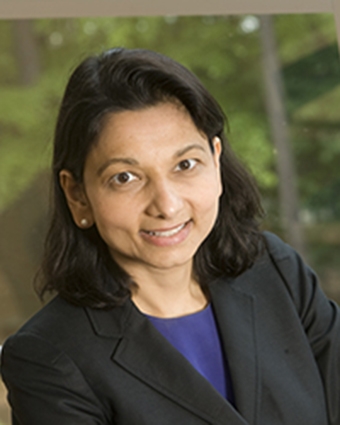 Arti Rai, the Elvin R. Latty Professor of Law and faculty co-director of the Center for Innovation Policy, has been appointed to serve as a senior advisor in the Office of General Counsel in the U.S. Department of Commerce.

In this role, Rai will be advising on a range of issues involving innovation and technological competitiveness. The Department of Commerce comprises bureaus including the U.S. Patent and Trademark Office (USPTO), the National Institute of Standards and Technologies, and the International Trade Administration.

Rai is the second member of the Duke Law School faculty to be asked to serve in the administration of President Joe Biden. Christopher Schroeder, the Charles S. Murphy Professor Emeritus of Law and professor emeritus of public policy, will be nominated to lead the Office of Legal Counsel in the Department of Justice.

Rai is an internationally recognized expert in intellectual property law, innovation policy, administrative law, and health law. Her extensive research on these subjects has been funded by the National Institutes of Health, National Science Foundation, the Kauffman Foundation, the Greenwall Foundation, and others. From 2009 to 2010, she headed the Office of Policy and International Affairs at the USPTO. In that capacity, she led policy analysis of the patent reform legislation that ultimately became the America Invents Act and worked to establish the USPTO’s Office of the Chief Economist.

Most recently, she was the lead investigator on a grant from the Laura and John Arnold Foundation to examine whether the administrative system for patent review established by the America Invents Act is impacting patent terms for small-molecule drugs and large-molecule biologics and thereby affecting the availability of less expensive generic or biosimilar equivalents. It was the first rigorous empirical investigation of the role that the administrative review system, known as the Patent Trial and Appeal Board (PTAB), is playing relative to federal district courts, previously the sole venue for patent challenges.

Rai’s numerous publications have appeared in both law reviews and peer-reviewed journals, including Science, New England Journal of Medicine, Journal of the American Medical Association, Journal of Legal Studies, Nature Biotechnology, and Journal of Law and the Biosciences. Her recent scholarship includes “Accountability, Secrecy, and Innovation in AI-Enabled Clinical Decision Software,” 7 Journal of Law and the Biosciences __ (2020) (with others) and Clearing Opacity Through Machine Learning, 106 Iowa Law Review 775-812 (2021) (with W. Nicholson Price II).

Rai regularly testifies before Congress and relevant administrative bodies on innovation-related law and policy issues and regularly advises federal and state agencies on such issues. She is a member of multiple distinguished councils, including the National Academies’ Forum on Drug Discovery, Development, and Translation; the Polaris Advisory Council to the Government Accountability Office; and the American Law Institute. She has also served as a member of the National Advisory Council for Human Genome Research, as a public member of the Administrative Conference of the United States, and on numerous National Academies committees.

The Center for Innovation Policy at Duke Law is a forum for independent, nonpartisan analysis and balanced discussion of policies for promoting technological innovation that enhances long-term social welfare. The center brings together technology and business leaders, government officials, lawyers, and academics to identify improvements in legal frameworks and policies that directly affect innovation.