Empirical analysis of patent invalidation and dispute settlement at the Patent Trial and Appeal Board will inform current policy debates regarding pharmaceutical innovation and access. 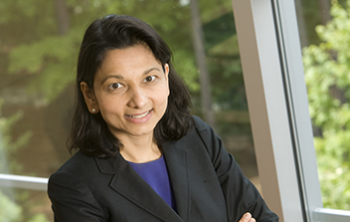 Elvin R. Latty Professor of Law Arti Rai is the lead investigator on a one-year grant from the Laura and John Arnold Foundation to examine whether the administrative system for patent review established by the America Invents Act of 2011 (AIA) is impacting patent terms for small-molecule drugs and large-molecule biologics and thereby affecting the availability of less expensive generic or biosimilar equivalents.

The study is the first rigorous empirical investigation of the role that the administrative review system, known as the Patent Trial and Appeal Board (PTAB), is playing relative to federal district courts, previously the sole venue for patent challenges. It focuses on how the introduction of the PTAB has impacted effective patent terms for small-molecule drugs — those generally administered as pills — and large molecule biologics, which are generally delivered as infusions and injections. In order to evaluate impact, the study will examine both patents on the key compounds as well as secondary patents that cover such ancillary features as formulations and are sometimes considered to be of lower quality than compound patents. Rai, the faculty co-director of the Duke Center for Innovation Policy and an internationally recognized expert in innovation policy and intellectual property, administrative, and health law, is undertaking the study with three colleagues.

“The PTAB is probably the most controversial creation in the patent system in the last 50 years, and it’s been particularly controversial as a so-called ‘death squad’ for pharmaceutical patents,” said Rai, who led policy analysis of the legislation that would become the AIA while serving as administrator of policy and external affairs at the U.S. Patent and Trademark Office (USPTO) in 2009 and 2010. “Whether or not it’s a death squad or an accurate adjudicator of validity is a question we hope the study can help address.”

The branded pharmaceutical industry has attempted to lobby Congress for carve-outs and exemptions from PTAB review, claiming the system “isn’t accurate” and puts patents that incentivize further innovation at risk, Rai said. Bills pending before both the U.S. House of Representatives and the Senate would require challengers to choose between contesting small molecule and biologic patents in federal court or at the PTAB.

But in their grant application, Rai and her colleagues point to key research that shows the industry “often manages to extend monopoly protection over patents of even dubious validity simply because it’s so hard to challenge them in federal court.” They contend that the PTAB, with administrative judges who are technical experts, facilitates “faster and cheaper challenges” and, possibly, greater accuracy. The current study, Rai said, will provide essential empirical context for the current policy debate.

Co-investigator Saurabh Vishnubhakat, professor of law and engineering at Texas A&M University and a former Center for Innovation Policy fellow, was one of Rai’s partners in a highly cited study that found the PTAB, in general, offers “a more accessible and more technically expert body for correcting errors made by the USPTO in examining and granting patents in the first instance,” than does litigation. Co-investigators Jorge Lemus, assistant professor in the Department of Economics at the University of Illinois, Urbana-Champaign, and Evan Hovenkamp, assistant professor at USC Gould School of Law, have previously studied the effect of PTAB validity challenges and settlements on the entry of generic competitors into the market for small-molecule drugs.

Rai and her colleagues are building novel and highly detailed datasets to facilitate three main areas of inquiry: the factors that drive case selection in the district court and at the PTAB, in order to discern the incremental role the PTAB is playing over and above district court litigation for different classes of patents; the effect of the PTAB on the timing and prevalence of generic and biosimilar entry; and what the data suggest about settlements in PTAB challenges and how they may be influencing generic and biosimilar availability. The datasets will be made public.