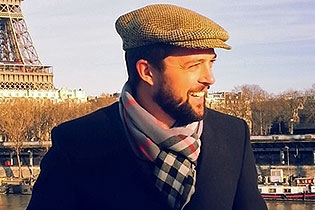 Ryan Stoa entered the academy directly from law school thanks, in part, to a job that seemed to have been tailor made for him when he applied for it during his third year at Duke. The job advertised at Florida International University (FIU) required someone with a JD, a background in international development, and fluency in French to manage projects relating to international water sustainability and engage in related legal teaching and scholarship. Stoa, who majored in international development at McGill University, holds dual U.S.-French citizenship, and had developed a strong interest in water law and policy at Duke Law, where he received the 2011 Faculty Award in environmental law.

Four years later, Stoa co-directs the Environmental and Natural Resources Law Program at the FIU College of Law. He holds a joint appointment in the College of Arts and Sciences, where he is the co-director of the International Water Group of the Institute for Water and the Environment, and is affiliate faculty in the African and African Diaspora Studies Program. He teaches courses on water resources law, ocean and coastal law, and natural resources law, and focuses his research and scholarship on a range of issues relating to environmental and natural resources laws and policies, energy and hydropolitics, and international development. In 2015 Stoa, who blogs at www.ryanstoa.com, received the “FIU Top Scholar” award.

Stoa started at FIU as deputy director of the Global Water for Sustainability Program, an FIU-led, interdisciplinary initiative funded by the United States Agency for International Development. As the only lawyer attached to the program, he was called upon to address a range of water issues as they arose and became deeply involved in two international projects.

In the Republic of Georgia, Stoa advised the Ministry of the Environment and Natural Resources on draft water regulations and on the country’s rights and obligations under a draft agreement with Azarbaijan regarding management of the Kura River. Once wholly contained within the boundaries of the U.S.S.R., the Kura “became international overnight” when the Soviet Union collapsed and the neighboring states became independent republics, he says. “The Kuras-Aras River Basin remains one of the most significant basins lacking a cooperative governance framework.”

In Haiti, Stoa undertook a comprehensive analysis of the legal frameworks that enable water governance to take place, part of a larger water management project funded by the Inter-American Development Bank. “I essentially mapped the sector: What are the main laws, who’s in charge of implementing them, and to what extent are they being implemented?” he says. “In the U.S., you can look that information up easily, but in Haiti it’s difficult to even find the law, let alone to know whether it’s been implemented.” His survey, “Water Governance in Haiti: an Assessment of Laws and Institutional Capacities,” is forthcoming in the Tulane Environmental Law Journal.

Stoa has emerged as a prolific writer, publishing his articles in leading law journals and scholarly books. In one recent paper published in the Georgetown Environmental Law Review, “Droughts, Floods, and Wildfires: Paleo Perspectives on Disaster Law in the Anthropocene,” he examines policy choices that can build societal resilience in the face of recurrent natural disasters.  “We’re vulnerable to floods because we have millions of people living on the coasts,” he says. “We’re vulnerable to drought because we’ve set up our agricultural system in the arid American West. We’re vulnerable to wildfires because one-third of homes in the United States are located in the wildland-urban interface.

“These disasters will continue to happen even if we implement the best climate change policies,” he says. “We need to look at the specific ways we can increase our resilience, instead of exacerbate our vulnerability.”

One example he offers of a policy that can perpetuate vulnerability is the National Flood Insurance Program that subsidizes flood insurance for coastal communities. While it promotes a societal objective of compassion in the face of disaster, insurance subsidies in effect make it easy for people with a desire to live near water to put themselves in harm’s way. Miami, he notes, is considered by some measures to be the city most at risk from sea level rise, based on the value of financial assets on its coast. “Instead of reacting to disasters, perhaps we can be proactive and do things to reduce our vulnerabilities,” he says.

Stoa’s forthcoming article, “Weed and Water: Regulating Legal Marijuana,” offers the first in-depth analysis of how the legal production of one of the nation’s most valuable cash crops is likely to interact with existing water management laws. Legalization, he observes, is often the result of a ballot initiative forcing legislators and administrative agencies to adapt quickly without time to thoughtfully address changes to the regulatory framework, and is occurring at a time when water scarcity is of concern in many states.

“Marijuana is, at the end of the day, a crop in need of water,” Stoa says. “With water allocation primarily a state function, the question is how state water laws are going to be applied to a newly legal industry and, conversely, how the marijuana industry will enter the regulatory framework for water.” His article examines the existing major doctrines of U.S. water law – riparianism in the East, prior appropriation in the West, and California’s unique and complex doctrine – and how they are or can adapt to increased legal cultivation of marijuana. Broadly speaking, he writes, “both common law and regulatory approaches to water allocation are capable of accommodating legal marijuana cultivation, but to minimize disruptions to existing water rights and the marijuana industry, state agencies will need to proactively adapt to the new realities of the legal marijuana economy.”  The article will be featured in the April 2016 issue of the Hastings Law Journal.

Stoa says he gained particular insight into the scope of water resources law and policy while working on matters relating to the relicensing of Alcoa dams on North Carolina’s Yadkin River in the Environmental Law and Policy Clinic.  “The Alcoa case demonstrated how water factors comprehensively into the social and economic life of a community,” he says, referring to the town of Badin, the epicenter of controversy. “Water is used for domestic purposes, agricultural purposes, energy, industry, recreation, and various others, all of which factored into the case. I learned that water law really is not just a niche subject.”